Envenoming by the rough-scaled snake (Tropidechis carinatus): a series of confirmed cases

Results: There were 24 confirmed cases of RSS envenoming, nearly all occurring in coastal areas between northern New South Wales and south-eastern Queensland. Twenty-three patients had local bite-site effects and 17 had at least three non-specific systemic effects (eg, nausea, headache). All 24 had venom-induced consumption coagulopathy (VICC), and 19 had an international normalised ratio > 3.0. Six had bleeding from the bite site or intravenous cannula site, 10 had blood detected on urinalysis, and one had a major intra-abdominal haemorrhage. Mild neurotoxicity developed in two patients, and one patient developed myotoxicity with generalised myalgia, myoglobinuria and a peak creatine kinase level of 59 700 IU/L. Twenty-three patients were treated with antivenom (21 with tiger snake antivenom, two with polyvalent antivenom). Free venom was undetectable in 19 of 20 blood samples taken after antivenom administration.

Conclusion: RSS envenoming occurs predominantly in coastal areas of northern NSW and southern Queensland, and within this range, most envenoming is due to the RSS rather than tiger snakes. Clinically it is characterised by VICC, with mild neurotoxicity and myotoxicity in some cases. Tiger snake antivenom appears to be effective against RSS envenoming.

The Australian snake Tropidechis carinatus (the “rough-scaled snake” [RSS]) (Box 1) is a relatively small snake (growing to about 1 m in length) that is taxonomically related to the Australian tiger snake (Notechis spp). The RSS and tiger snake are both “elapid” snakes (members of the family Elapidae), characterised by venom-secreting fangs that are fixed at the front of the upper jaw. The RSS inhabits temperate and tropical coastal regions and has previously been identified between northern New South Wales and south-eastern Queensland, with a few specimens found further north in Queensland.1,2 Features of envenoming are thought to be similar to tiger snake envenoming, including venom-induced consumption coagulopathy (VICC), myotoxicity and neurotoxicity. Snake venom detection kit (SVDK) testing for RSS venom gives a positive result for both RSS and tiger snake venom.3

Until recently, when an enzyme immunoassay (EIA) technique became available, it was not possible to confirm RSS envenoming unless a snake was provided for identification. Previous reports have been from snake handlers and botanists2 and may not be representative of the general patient population being bitten by snakes. Furthermore, in northern NSW and south-eastern Queensland, within the natural range of the RSS, it remains unclear what proportion of “tiger snake group” envenomings are due to RSSs. As well as tiger snakes, two Hoplocephalus species (Stephens’ banded snake and the pale-headed snake) occur in the same region and their venoms may also test positive for tiger snake venom with SVDK.

The aims of our study were to determine the occurrence and features of RSS envenoming using expert identification of the snake or EIA confirmation of venom in patient sera.

We analysed a cohort of patients from northern NSW and Queensland with potential RSS bites or envenoming — defined by snake identification, a positive SVDK result in the tiger snake well, or any clinical or laboratory features of elapid envenoming without a diagnostic SVDK result. The cohort was drawn from participants recruited into the Australian Snakebite Project (ASP).4 The ASP is an ongoing multicentre prospective observational study that recruits suspected snakebite and snake envenoming cases from over 100 major tertiary and regional hospitals and associated major poisons information centres. Ethics approval has been obtained from 16 human research ethics committees relevant to all institutions involved.

Demographic details, clinical effects and laboratory information and treatments relating to all patients recruited to the ASP are recorded on datasheets made available to the treating doctors. All data are entered into a purpose-designed relational database. Patients recruited to the ASP have serial serum samples collected for venom and antivenom quantification. Samples are spun, aliquoted, frozen and stored at –80°C before analysis.

From all patients recruited to the ASP between January 2004 and December 2008, a cohort was identified by searching the database for “rough-scaled snake”, “tiger snake group” and “tiger snake”. Suspected tiger snake bites from areas clearly outside the range of T. carinatus (ie, Western Australia, South Australia, Tasmania and Victoria) were excluded, as well as cases in which there was a definite identification of a tiger snake or a member of the genus Hoplocephalus (Box 2). Finally, cases could only be included if there was a blood sample available from the patient before antivenom was administered or if the snake had been brought in for identification. Definite RSS envenoming was then confirmed by EIA and/or identification of the snake by a qualified expert.5

EIA was performed on stored pre-antivenom serum samples (or plasma samples, if no serum was available), using a technique described in detail elsewhere.6 In brief, polyclonal antibodies (IgG) to RSS, common tiger snake (N. scutatus) and Stephens’ banded snake (H. stephensii) were raised in rabbits, conjugated to biotin and used to develop a sandwich EIA using streptavidin-horseradish peroxidase as the detecting agent. The limits of detection were 0.3 ng/mL for the anti-RSS assay and 0.7 ng/mL for the anti-tiger snake assay. There was minimal cross-reactivity between antibodies to H. stephensii venom and antibodies to both RSS and tiger snake venoms. There was moderate cross-reactivity between RSS and tiger snake venoms and antibodies, but standard curves for each of these venoms did not overlap within the variability of the assay above 2 ng/mL. For concentrations over 2 ng/mL, RSS and tiger snake venoms could be accurately distinguished. Each sample was tested for all three venoms.

For descriptive statistics, median and interquartile range (IQR) were calculated for data that were not normally distributed.

Of 697 people with snakebite recruited to the ASP, 42 were identified as potential RSS bite victims based on geographical location, SVDK results and clinical effects. Of these 42 people, 24 were confirmed to have experienced RSS envenoming, based on EIA or definite snake identification (Box 2). EIA results were available for 23 patients (median venom concentration, 17 ng/mL [IQR, 15–32 ng/mL]). The snake was identified and venom detected in serum in three cases. In one case, confirmation was based on snake identification alone, as no pre-antivenom serum sample was available.

All RSS bites investigated in our study occurred between Newcastle (mid-eastern NSW) and the Sunshine Coast (south-eastern Queensland), except for one isolated case in Cairns (northern Queensland) (Box 3). The median age of the 24 patients was 35 years (IQR, 21–49 years; range, 9–60 years) and 21 of the 24 patients were male. Based on bite-site swabs tested with SVDK, 20 cases were positive for tiger snake venom, two were negative and one was equivocal (in one case, the bite-site SVDK test was not done). Of four urine samples tested by SVDK, all were positive for tiger snake.

Twenty-three patients complained of local bite effects, and 17 reported three or more non-specific systemic effects (Box 4). In the 19 patients who had VICC, recovery of INR to 2.0 or less took a median time of 11.5 hours (IQR, 10.0–13.4 hours). The remaining five patients had mild VICC. Six patients complained of either bleeding from the bite site or from an intravenous cannula site, and 10 had blood detected on urinalysis. One patient had an intra-abdominal haemorrhage requiring blood transfusion but not surgical intervention. Factor studies demonstrated specific deficiencies in fibrinogen, factor V and factor VIII, and partial reduction in factor II.

Neurotoxicity occurred in only two patients and was mild, with only ptosis developing. One of these patients also developed significant myotoxicity with generalised myalgia and myoglobinuria. His creatine kinase level peaked at 59 700 IU/L, but he did not develop renal impairment. Another two patients had a small rise in creatine kinase level, peaking at 1790 IU/L in both cases. Local myalgia was reported in a further three patients and generalised myalgia in another two. The only other significant laboratory results were leukocytosis in 22 patients, of whom 12 had lymphopenia. One patient had lymphopenia in the absence of leukocytosis. There were no deaths, and all patients were discharged from hospital without sequelae.

Twenty-three patients were treated with antivenom (21 with tiger snake antivenom, two with polyvalent antivenom; total median dose, 3 vials [IQR, 2–4 vials]), and two patients received fresh frozen plasma. Post-antivenom blood samples were available for 20 of the 23 patients receiving antivenom. In 19 of these patients, no free venom was detected after a median first dose of 2 vials (IQR, 1.5–4 vials), and in five patients, free venom was undetectable after administration of only 1 vial. In one patient who was given only a small amount of 1 vial (due to an allergic reaction), venom was still detectable after antivenom had been given.

The clinical effects of RSS envenoming included VICC, which was severe in most cases and associated with non-specific systemic symptoms — most commonly headache, nausea and abdominal pain. Major bleeding occurred in one case, and significant myotoxicity along with mild neurotoxicity occurred in only one case.

Most previous reports of RSS envenoming have been anecdotal cases involving identified snakes or cases occurring within the range of the RSS and shown to be SVDK-positive for tiger snake venom, and thus assumed to be the result of RSS bites. Trinca and colleagues2 reported 12 confirmed RSS bites in humans, but provided limited details on the clinical effects. Of the 12 patients, one died within 5 minutes of the bite and nine had non-specific systemic symptoms, including headache, nausea, vomiting, abdominal pain and diaphoresis. There was no information on whether coagulopathy occurred, and insufficient clinical detail to determine whether significant myotoxicity or neurotoxicity occurred. Almost no laboratory testing was done.

Other reports include possible RSS bites that occurred within the known range of the snake and were positive for tiger snake venom with SVDK.3,8,9 Other larger series of snake envenoming from Queensland are likely to include cases involving T. carinatus, but these cannot be distinguished from other cases involving snakes testing positive for tiger snake venom with SVDK.10-12 Myotoxicity and neurotoxicity have been reported in all these cases, but without confirmation by snake identification they provide limited useful information on RSS envenoming.

The measurement of venom concentrations in patient serum samples allowed us to determine whether antivenom was effective in binding all venom that was present. We found that tiger snake antivenom binds RSS venom and appears to be effective in patients, even at lower doses than currently recommended.

A limitation of our study was that we could only include envenomed patients in the cohort because the venom assay relies on the detection of venom in blood. The study is therefore likely to be biased towards more severe cases, and we were unable to establish the envenoming rate for RSS (ie, number of cases of envenoming divided by number of definite bites).

Our study suggests that most, and potentially all, tiger snake SVDK-positive cases in northern NSW and south-eastern Queensland are likely to be due to RSS and that the envenoming syndrome is similar to that of Notechis spp. Tiger snake antivenom appears to bind all venom, even after administration of a single vial. 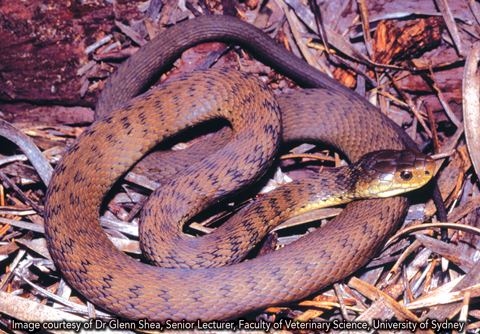 2 Flowchart showing the sample used in our study

3 Distribution of bites by the rough-scaled snake (Tropidechis carinatus) (triangles) compared with origin of T. carinatus specimens collected by the Queensland Museum (crosses) 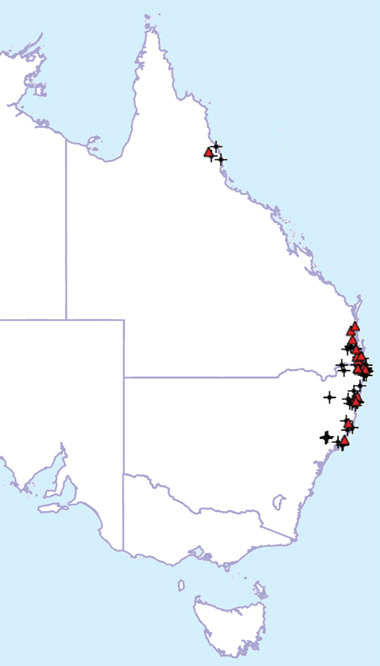 We wish to acknowledge the many clinicians and laboratory staff involved in recruiting and collecting data for the ASP and, in particular, for patients recruited to our cohort by Robert Bonnin, Mark Coghlan, David Ward, Andrew Parkin, Colin Page and Julian White. We also thank clinical toxicologists at poisons information centres around Australia for referring additional cases, and acknowledge the help of many nurses, doctors and laboratory staff in recruiting patients and collecting samples. We thank the Hunter Haematology Research Group for doing the clotting factor assays. Our study was supported in part by a National Health and Medical Research Council (NHMRC) project grant. Geoffrey Isbister is supported by an NHMRC clinical career development award and Simon Brown by an NHMRC career development award.