Objective: To evaluate the acceptance and cost of a ward-based geriatric consultation service delivered via a mobile videoconferencing system.

Design and setting: Prospective observational study conducted in the geriatric unit of Toowoomba Base Hospital, Queensland, comparing a specialist consultation service delivered by videoconference (VC) with a “traditional” in-person service. The VC system was established in January 2007 and evaluated over an 18-month period. Patient satisfaction with the service was assessed by questionnaire during a 1-week period in September 2008.

Results: Uptake of the service increased progressively throughout the study period. Patient acceptance levels were high. The cost of video consultations for a 12-patient ward round and case conference was less than the cost of in-person consultations if the total road distance travelled by the specialist (Brisbane to Toowoomba and back) was 125 km or longer.

Specialists in geriatric medicine are in short supply. Many large and medium-sized hospitals operate post-acute units for rehabilitation or extended assessment of older patients.1 These units require input from specialist geriatricians. In Australia, outside major cities, there are often no geriatricians available to support such programs.

Telemedicine, in the form of videoconferencing, provides an opportunity for specialists to interact directly with both patients and multidisciplinary teams. In a few subspecialties, mobile videoconferencing (in which the specialist interacts directly with patients, house doctors and nurses at the bedside)2,3 has been used as a substitute for “traditional” ward rounds.

In early 2007, we established a videoconferencing practice model to support specialist ward rounds in a geriatric unit at the Toowoomba Base Hospital in rural Queensland. The hospital had a geriatric ward, but no geriatrician had been available for over 5 years.

Here we give a brief description of the model and report on a multifaceted evaluation of its first 18 months of operation, including hospital and patient acceptance of the service and its cost compared with in-person ward rounds.

The Toowoomba Base Hospital is a 200-bed general hospital located 125 km west of Brisbane. The geriatric unit is located within a 25-bed ward, which accepts patients requiring geriatric assessment, rehabilitation or other forms of post-acute care from the general hospital wards. Before the commencement of the service described here, medical oversight was provided by the same medical staff who managed the patients at their initial admission.

A videoconferencing system was established in the geriatric unit in January 2007 and evaluated over an 18-month period between March 2007 and September 2008. The evaluation described here was based on an initial subunit of 12 beds. However, the model was later extended to the entire 25 beds in the geriatric unit, with two separate rounds and case conferences each week.

The geriatric unit operates as a post-acute service. Patients are identified for admission within a few days of entry to the hospital through a combination of screening and referral.4 This pre-transfer process includes an online assessment performed by a geriatrician using a web-based clinical decision support system based on the interRAI Acute Care assessment system.5,6

A shared care arrangement is used, with the initial treating medical team continuing to manage medical aspects of the patients’ care. The geriatrician provides additional diagnostic input and oversees functional and psychosocial interventions as well as discharge planning. The model is thus a variation of the Acute Care of the Elderly model described by Palmer and colleagues.7,8

Weekly rounds are conducted by videoconference (VC). The web-based clinical support system enables the remote clinician to have accurate clinical information, particularly with reference to geriatric syndromes and functional and psychosocial problems. Pathology results can be viewed online. The geriatrician is able to view all of this information at his or her office desk alongside the VC monitor (Box 1).

Interaction is achieved through a wireless, mobile VC apparatus, which enables two-way vision and conversation between the geriatrician and the patient, accompanying nurse, and junior house doctor. The camera is controlled remotely by the geriatrician, permitting about 270-degree panning and a zoom capability sufficient to read 12-point text.

The videoconferencing data are transmitted from the mobile equipment to a wireless access point located in the ward area, and then via a private local area network (LAN) to a digital subscriber line (DSL) router. The wide area data transmission occurs over a business-grade DSL connection (512 kbps symmetric [ie, providing the same bandwidth upstream and downstream]). Standard commercial videoconferencing codecs (coder-decoders) (the Sony PCS-1 system) are employed at each end. Hardware maintenance and bookings are managed remotely by the Centre for Online Health at the University of Queensland.

The apparatus is wheeled to the bedside and, after a brief introduction by the nurse on site, the conversation and examinations are led by the remote clinician (Box 2). Typically, there is a discussion with the nurse and house doctor; a review of pathology and imaging; a patient interview and clinical examination, including a gait and balance examination; a review of the medication chart; and a final discussion.

On the same day, a multidisciplinary team meeting is conducted by VC. The format is similar to that offered in most geriatric and rehabilitation wards.

Once a month during the evaluation period, the geriatrician visited the hospital and conducted a traditional in-person ward round. The purpose was to collect data on the activity and cost of in-person consultations for comparison purposes.

The number of patients who had consultations per week was recorded. Feasibility and sustainability of the new system were assessed by examining the use of the service, as this depended on decisions by senior medical staff to refer the patient to the service.

The level of patient satisfaction with the new system was appraised using an 11-item structured questionnaire. This was administered by a medical student immediately after each video consultation with patients who were seen during a single week in September 2008.

We conducted a service cost-minimisation analysis based on the purchase price of equipment (amortised over 3 years at a depreciation rate of 25%), operating costs for direct videoconferencing (including monthly DSL contract fees), and the salary and travel costs relating to consultations and team meetings over a period of 52 weeks. Salary costs were based on published Queensland Health award rates and included salary on-costs. Travel times and distances were recorded for each round trip made by the geriatrician (Brisbane to Toowoomba and return). Costs were compared with the recorded costs of in-person ward rounds conducted once a month with the same patient population.

Our study was approved by the human research ethics committees of Princess Alexandra Hospital (Brisbane), Toowoomba Base Hospital and the University of Queensland.

At the time the videoconferencing service commenced in January 2007, four patients were seen. Patient numbers increased progressively over several months and stabilised at a pre-planned maximum of 12 patients per week after 6 months. A typical ward round comprised 2–4 new cases and 8–10 case reviews. The hospital administration’s request to expand the service to 25 patients in June 2008 was further evidence that the service was sustainable and acceptable to hospital staff. The level of patient consultations by VC has been sustained up to the present time.

Nineteen patients seen over a 1-week period in September 2008 were approached for interviews, and four declined. The mean age of the remaining 15 patients was 77 years. On average, these patients participated twice in VC ward rounds during the evaluation period.

Overall, patients found both the technical aspects and the medical consultation to be highly acceptable, even though four patients had moderate to severe impairment in communication and hearing and six had mild to severe cognitive impairment. (Vision and cognition were quantified using items in the interRAI Acute Care assessment system.) Thirteen patients reported seeing and hearing the geriatrician clearly or very clearly and 14 felt their privacy was preserved as well as or better than in an in-person consultation. Twelve respondents felt that the geriatrician review helped with their current problems, and 13 said they were satisfied or very satisfied consulting the geriatrician by VC and would be comfortable using videoconferencing to see a specialist in the future.

Travel by road to and from the hospital was about 200 minutes for the round trip. Therefore, including travel time, ward rounds and team meetings, in-person consultations with patients required a total weekly time allocation of around 8.5 hours, while the VC approach required 5.0 hours when breaks and disruptions were included. This resulted in a time difference of 3.5 hours, largely attributable to travel time. Cost analyses for VC ward rounds compared with in-person ward rounds are shown in Box 3.

The estimated annual cost of geriatric consultations by VC, where no travel was required, was $73 078. This cost included the geriatrician’s wages for the ward round and team meeting; nurse training costs; operating costs; DSL fees; and setup costs for the videoconferencing system.

Thus, approximately $18 000 per annum can be saved by having a geriatrician provide video consultations rather than travel 250 km each week to provide in-person consultations.

The results of a sensitivity analysis of the effect of “low” and “high” input costs on the cost difference between VC and in-person consultations are summarised in Box 4.

To our knowledge, the model of service delivery described here is unique in geriatric medical practice. Reviews in the literature suggest that patient acceptance of telemedicine is generally high,9,10 but no previous studies in a geriatric population have been reported. As the prevalence of cognitive, visual and communication deficits in this population is high, it is important to specifically verify acceptance. Our study indicated a high level of patient acceptance.

The videoconferencing model limits the ability to perform a “hands on” clinical examination. Although there is evidence that cognitive assessment and neurological examination can be performed reliably by VC,11 the geriatrician is reliant on the judgement of others for examinations requiring palpation and auscultation. The potential loss of accuracy in these areas of assessment in geriatric practice requires further research. Nevertheless, in many communities, a telemedicine service will be the only viable means of having access to the expertise of a geriatrician. Thus, the key research question is whether a telemedicine-delivered service is better than no service.

The model appears to be immediately applicable to hospitals that have a sufficient caseload of frail older patients to justify establishing a geriatric ward but are unable to recruit a geriatrician. We envisage extension of the model to other inpatient clinical situations, including geriatric consultation in non-geriatric wards and in small rural hospitals where a geriatric ward configuration is not justified.

Our study demonstrates that a geriatrician can provide major input into the operations of a remote geriatric unit, using a combination of online clinical information and videoconferencing. The service is sustainable, well accepted by patients and staff, and less expensive than in-person consultations if the geriatrician’s total weekly travel time exceeds 72 minutes — a remarkably short time. This service model has the potential for widespread application wherever geriatric specialists are in short supply and the requisite technical infrastructure is available.

1 Geriatrician’s view of the patient during a video consultation 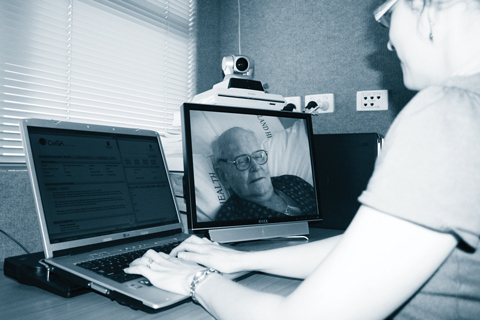 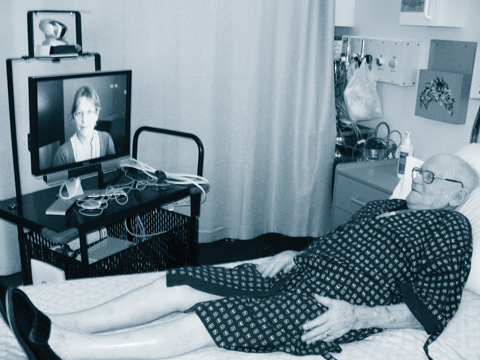 The Princess Alexandra Hospital Private Practice Fund provided funding for the evaluation. Queensland Health and Toowoomba Base Hospital provided funds to operate the service. Special thanks to Jillian Richardson, Nurse Unit Manager, and Susanne Pearce, Nurse Assessor, who contributed to the operational design of the service, and George Leaper, the medical student who administered the patient satisfaction survey.