Are the alleged remains of Johann Sebastian Bach authentic?

Although Johann Sebastian Bach (1685–1750) is considered one of the greatest composers of all time, he was buried in an anonymous grave whose exact location is uncertain. A skeleton alleged to be his was exhumed from the graveyard of St Johanniskirche in Leipzig, Germany, in 1894 and reburied 55 years later in St Thomaskirche in the same city, where it remains.

There has been much conjecture about the authenticity of this skeleton and it has been examined several times to establish its identity. In 1894, anatomist Wilhelm His reconstructed the face1,2 and, with remarkable foresight, took into account the possibility of future research, discussing the possibility of “our descendants in later centuries wanting to examine the skull”.2 In 1949, surgeon Wolfgang Rosenthal noted abnormalities of the skeleton that corresponded with those he saw in radiographs of living church organists, leading him to propose a musculoskeletal condition, Organistenkrankheit (“organist’s disease”).3

Here, we critically evaluate the evidence that the remains are those of Johann Sebastian Bach, including results of our investigation into Organistenkrankheit in 12 present-day church organists.

Several years after Bach’s burial in July 1750, the exact location of his grave was unclear.1-6 Based on oral tradition, it was in the graveyard surrounding St Johanniskirche in Leipzig, “six paces away from the south portal”.4 This oral tradition apparently originated in 1894 from a 75-year-old man, who in turn was informed about the location 60 years earlier by a 90-year-old gardener employed at the graveyard.4 Composer Robert Schumann attempted unsuccessfully to find Bach’s grave (in 1836), as did Leipzig historians Carl Gretschel and Heinrich Heinlein, who both published books on the history of the graveyard (in 1836 and 1844, respectively).4

Before the 1894 exhumation, Leipzig’s director of archives Gustav Wustmann determined that Bach was buried in one of the so-called superficial graves, whose location was not registered.4 Compounding the difficulty, in the year of Bach’s death, no graves were marked with a memorial stone. However, unusually for the time, Bach was buried in an oaken coffin (of the 1400 people who died in Leipzig in 1750, only 12 were buried in such a coffin).4

Thus, when — according to local oral tradition — an oaken coffin containing the skeleton of a man aged about 65 years was found at a depth of 2.37 m in the specified area of the graveyard on 22 October 1894, it was, after the research by His, believed likely to be the remains of Bach.2,5

Research by Wilhelm His

In 1895, Wilhelm His published a thorough examination of the remains (Box 1, A), including 22 pages describing and illustrating the skull.1 He particularly emphasised his examination of the temporal bone to detect any extraordinary developmental features related to the sense of hearing, which he believed would indicate musical talent. His findings included strong development of the promontory overlying the first coil of the cochlea of the petrous bone,1 which he supposed to indicate a well developed hearing organ. However, we believe it was far more likely to be related to overall skull size.

His also described examining the facial soft tissue of 37 bodies in relation to the underlying skull, as a basis for reconstructing a replica of the face,1 and correlated this with paintings of Bach (Box 1, B). Using this information, Leipzig artist Carl L Seffner superimposed a reconstruction of the face on a replica of the skull (Box 1, C). This reconstruction showed a face that was logically compatible with those in portraits of Bach. His picture was again superimposed on the skull many years later using computer techniques, with the claim that the portrait fitted the skull.7

The facial reconstruction, together with the site of the grave, nature of the coffin and estimated age of the body at death led His to conclude that the exhumed skeleton was most likely that of Bach.2

When the remains at St Thomaskirche were transferred to a new coffin in 1949, surgeon Wolfgang Rosenthal had the opportunity to inspect the skeleton. Although he did not notice any special features of the skull, he detected multiple bony outgrowths, which he considered to be exostoses, on the pelvic ring.3 He claimed His had mistaken these for signs of “arthrosis deformans” (osteoarthritis). He also noticed overdeveloped Muskellinien (“muscle lines”; bony outgrowths at sites of muscle and ligament attachment, now termed enthesophytes) on the arms of the skeleton. These outgrowths were assumed to be a sign of physical strength in people who use their arms powerfully over a long period. Rosenthal stated that multiple exostoses on the arms and legs are generally found in horseback riders, soldiers and sportsmen, in response to repetitive mechanical trauma. At that time, such formations were termed Reiter- und Exerzierknochen (“horseback rider and military drill bones”). A modern interpretation of these lesions is shown in Box 2.

Rosenthal hypothesised that intensive organ playing, which requires the use of arm and leg muscles, could cause changes analogous to the changes defined at that time as Reiter- und Exerzierknochen. To test his hypothesis, he analysed pelvic x-rays of 11 living professional organists who, like Bach, began playing early in life, and found enthesophytes in all. He termed this phenomenon Organistenkrankheit, and proposed that the presence of similar exostoses on the alleged skeleton of Bach proved its identity.

Our investigation of the remains

In 2006, we presented a detailed scientific plan for examining the remains to the board of St Thomaskirche. A major goal was to compare DNA from the skeleton with DNA from one of Bach’s sons, Carl Philipp Emanuel (1714–1788), whose remains are kept in St Michaeliskirche in Hamburg, Germany.10 Unfortunately, the board of St Thomaskirche rejected our proposal, through which modern science might have shed more light on this intriguing riddle.

A second part of our investigation was to reproduce the research reported by Rosenthal. We undertook a study to explore the presence of enthesophytes in modern-day organists. Details are shown in Box 3.

Based on the available evidence, we believe it is unlikely that the the skeleton in question is that of Bach. The site of Bach’s grave was based on a doubtful oral tradition, and the value of the coffin being made of oak seems overestimated. Wilhelm His hoped his examination would find indicators of an extraordinarily developed musical talent, although a direct relationship between a highly developed peripheral sense of hearing and musical virtuosity has not been proven. A famous counterexample is Ludwig van Beethoven, who had hearing problems for half his life and wrote many compositions while completely deaf.12 Furthermore, the method His used to reconstruct Bach’s face was based on the assumption of a relationship between the skull and overlying soft tissue, which is disputed.13-15

Rosenthal’s hypothesis about Organistenkrankheit is of interest, but unfortunately he did not provide illustrations of the pelvic lesions of Bach’s alleged skeleton. In addition, we believe that the 13-year interval between his inspection of the skeleton and publication of his article (in 1962) reduces the reliability of his interpretations. Like Rosenthal’s claim that His mistook the enthesophytes for arthrosis deformans, Rosenthal himself may have mistaken the aetiology of the abnormalities. Nevertheless, the described lesions appear consistent with the conclusion that the skeleton belonged to an individual who intensively used his locomotor system.

However, we were unable to reproduce Rosenthal’s results in our exploratory study to identify the presence of enthesophytes in professional church organists. Despite the small sample size, the implication is that the presence of enthesophytes cannot be used as evidence either for or against the identification of any skeleton as a church organist and, hence, cannot be used as proof that the skeleton is that of Bach. Although modern scientific techniques, such as DNA analysis, might give more information about the identity of the remains, further investigation has not, to date, been approved.

The anonymous skeleton in St Thomaskirche is claimed to be that of Johann Sebastian Bach. However, we conclude that, given the uncertainties about the burial site, His’s controversial facial reconstruction, and Rosenthal’s irreproducible Organistenkrankheit, it is unlikely that the remains are those of Bach.

1 Johann Sebastian Bach and the skeleton alleged to be his 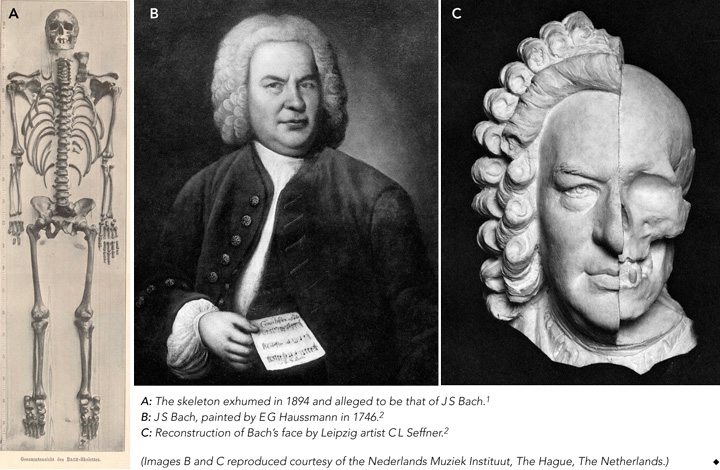 The latter are induced by long-term mechanical strain, both from forces external to the body, as in carrying heavy burdens, and from internal forces, such as hyperextension of the limbs.8 Examples include:

Enthesophytes — ossified connective tissue attachments to bone, for instance at the end of a muscle or fascia attachment. For example, long-term pushing of a wheelbarrow may lead to bilateral ossification of the Achilles tendon (calcanear spurring).

Reiterknochen and Exerzierknochen (myositis ossificans) — ossified muscle tissue caused by repetitive mechanical trauma. For example, soldiers who frequently present a rifle during drill may develop local ossification of muscle tissue in the left pectoralis. According to the modern definition, these are true extraskeletal bone formations in muscle tissue, and hence are seldom attached to bone.9

3 Investigation of the existence of Organistenkrankheit in modern-day organists

Objective: To investigate the presence of enthesophytes in living organists.

Study design, setting and participants: Comparative study of 12 male professional church organists aged 60–70 years in the Netherlands in 2007 and an age-matched control group, comprising 12 male patients identified from the Picture Archiving and Collecting System of the Academic Medical Center of Amsterdam, The Netherlands. An exclusion criterion for both groups was the presence of inflammatory arthritis, as enthesophytes can occur in inflammatory bone disease.11 None of the control group were organists.

We obtained conventional weight-bearing anteroposterior radiographs of the pelvis of each participant. The organist group was asked about any history of surgery on the spine or hip joints, previous consultation with a physiotherapist, and participation in extreme sports.

All radiographs were evaluated for the presence of enthesophytes by two radiologists — an independent radiologist and one of the authors (M M) — both blinded to the nature of the group. In the case of disagreement, the opinion of the independent radiologist was considered correct for the analysis. The presence of enthesophytes was graded as positive (clearly present), minimal (irregular bone surface) or none. The grade “minimal” was considered a negative result to allow comparison with Rosenthal’s results, as it is unlikely that the minimal changes seen in our study would have been detected by the lower-quality imaging available 50 years ago. Unfortunately, Rosenthal’s radiographs are available for comparison only as the low-quality prints shown in his published article.

Results: Six of the 12 organists reported chronic or more than one episode of back pain, and five of these had been treated for one or more episodes of pain by a physiotherapist or chiropractor. In the control group, all patients reported back, hip or knee pain.

Pelvic enthesophytes were seen in four of the organists (33%) (Figure), and negative results in eight (67%), comprising minimal changes in three and none in five. In the control group, enthesophytes were seen in nine patients (75%) and negative results in three (25%), comprising minimal changes in two, and none in one. We acknowledge that our study is limited by the small number of participants.

Discussion: Only a third of the organists in our sample showed a convincing number of enthesophytes, in contrast to the 100% incidence reported by Rosenthal. The control group showed a higher incidence of 75%. Our findings do not support the existence of Organistenkrankheit as a condition among organists.

We thank the 12 church organists for their voluntary and enthusiastic cooperation, the hospitals that took their radiographs, and P J M van der Eerden, MD (Department of Radiology, Academic Hospital of Groningen, Groningen, The Netherlands) for commenting on the radiographs.