Pushing the envelope: clinical handover from the aged-care home to the emergency department

Objective: To evaluate the use and usefulness of an aged-care home (ACH) transfer-to-hospital envelope (the Envelope) as a tool to support safe clinical handover when an ACH resident is transferred to an emergency department (ED).

Conclusion: The Envelope is useful and easy to use. It is used in the large majority of transfers of ACH residents to EDs and is highly valued by ACH staff, ambulance officers and ED staff. Our results suggest that use of the Envelope makes clinical handover safer for patients.

The residential aged-care sector is often overlooked when patient safety issues are considered. This is exemplified by the paucity of literature about clinical handover between aged-care homes (ACHs) and hospitals.1-3 Residents of ACHs are elderly, usually frail, and almost always have complex care needs. They often need to go to hospital — usually at short notice to an emergency department (ED), but also for planned admissions or to attend outpatient appointments. The transfer of ACH residents between ACHs and the acute sector involves a number of clinical handovers (between ACH staff, and between ambulance officers [AOs] and hospital staff) and a number of communication modalities (face-to-face, via telephone, by documents and — occasionally, but probably increasingly — electronically). The multiplicity of factors generates a high risk of communication failure and unsafe clinical handover, which can have a direct impact on the continuity of care and health outcomes for this population.3,4

As part of the Aged Care General Practitioner Panels Initiative (ACGPPI),5 we developed an “Aged care home transfer-to-hospital envelope” (the Envelope) (Box 1) in response to frequent anecdotal reports from ACH and ED staff about the poor quality of transfer and discharge information (clinical handover) accompanying residents both to and from hospital. We identified several reasons why clinical handover was frequently so poor between these health care settings.6 Firstly, there is limited understanding of the range of constraints affecting the provision of care in each setting. Secondly, there are workforce issues that have a direct impact on both reasons for transfer to hospital and the provision of clinical handover. These include limited access to timely and regular medical care, the skills mix of the residential aged-care workforce, and frequent turnover of staff in both ACH and ED settings (recruitment and retention issues as well as shift-to-shift and staff rotation issues). Thirdly, ACH staff frequently reported that clinical and other handover information they had provided did not reach the ED but disappeared into a so-called “black hole”. In addition, we commonly had the impression, from discussions with both ACH and ED staff, that clinical handover was not really recognised as necessary. There was a sense that, once the resident/patient was “sent off”, the responsibility for care was discharged and that “they” (ED or ACH staff, respectively) would take over effective care (without awareness of the need to provide handover information).

In the trial, our focus was on the ED, as the most common destination for transfer. Clinical handover at discharge from hospital to the ACH is a separate process requiring further study.

Participants in the trial were 26 ACHs (1545 beds) and the EDs of six major public teaching hospitals across inner city, inner east, north east, northern and western metropolitan Melbourne, as well as ambulance services involved in the transfer of residents from the 26 ACHs to hospital. The sample of ACHs recruited represented different provider models; cultural, socioeconomic and geographical diversity; varying size; and different levels of care provision.

We used a highly collaborative and consultative approach. Based on regular feedback, refinements were made to trial processes and tools, including the content and format of the Envelope.

In addition, the principles that governed the information “fields” included on the Envelope were (i) maintaining privacy of the resident (no clinical information is recorded on the Envelope); (ii) evidence to support inclusion or exclusion of content; (iii) succinct and simple design and content; (iv) appropriateness for use nationally; and (v) keeping costs to a minimum.

Phases of the trial

The trial was conducted from September 2007 to October 2008 in three phases:

Engagement and recruitment of stakeholders and development of trial tools (September to January). Effective working relationships had been established between Divisions of General Practice and ACHs through the ACGPPI. Divisions of General Practice had longstanding relationships with hospitals, which were further enhanced by work undertaken as part of the ACGPPI. This enabled recruitment to the trial and the keen participation of ACHs and EDs. Specific investment was made to engage with and recruit ambulance services, as AOs are key stakeholders in this particular clinical handover scenario.

Data collection by ACHs and EDs on use of the Envelope each time a resident was transferred to hospital during the period January–May 2008 (18 weeks) was overseen by a designated person in each ACH and each ED. ACHs submitted data forms weekly by fax. Project officers personally collected ED data forms each week. This built in the regular opportunity to meet with ED staff at each hospital to discuss strategies to improve data collection. In addition, we had access to routinely collected transfer data supplied by the Metropolitan Ambulance Service (now Ambulance Victoria).

Evaluation and reporting (May to October). Evaluation methods used were:

The final report was lodged with the Australian Commission on Safety and Quality in Health Care in October 2008.6

Results
Use of the Envelope

Usefulness of the Envelope

All 30 ED staff interviewed reported that the information about the ACH level of care was useful for background knowledge of the residential aged-care sector and for discharge planning.

All seven AO interviewees who were familiar with the Envelope reported that handover information was more organised when the Envelope was used.

All interviewees (19 ACH staff, seven AOs familiar with the Envelope, and 30 ED staff) believed that using the Envelope had improved clinical handover.

Sustainability of Envelope use

All 19 ACH interviewees reported that the Envelope was embedded in their transfer process and that they would continue to use it beyond the trial.

All 11 AOs and all 30 ED staff interviewed said they would support the use of the Envelope in all ACH resident transfers to hospital.

Awareness of the need for clinical handover

All interviewees (19 ACH staff, seven AOs familiar with the Envelope, and 30 ED staff) reported that using the Envelope had raised awareness of the importance of clinical handover.

Our results clearly show that the Envelope was used in the large majority of transfers of ACH residents to EDs. It was reported as easy to use, useful and highly valued by all parties involved in clinical handover from the ACH to the ED. There was a high level of support for its ongoing use.

The checklist of clinical and other handover information was particularly valued. It was developed and refined through a process of extensive consultation with all stakeholders, both before and during the trial, so we are confident that all key handover information is included.

An envelope is a low-cost, familiar, age-old communication tool and the instructions on the Envelope we designed and refined are simple and clear. The Envelope can function as a stand-alone tool, requiring minimal support and training for its implementation and use. The key challenges for ongoing and wider use of the Envelope are about supply and distribution (Box 4).

We note the discrepancy in background data on the number of resident transfers to hospital recorded from each data source (ACHs, EDs and Ambulance Victoria). However, in our view, this does not affect the main outcomes of the trial.

Previously we had observed widely variable awareness of the need for clinical handover between ACHs and hospitals. This was the case among some staff in both ACH and ED settings and consequently informed one of the key objectives of the trial, which was to raise awareness of the need for clinical handover in this situation. The finding that all interviewees in the trial (ACH, ambulance and ED staff) believed that using the Envelope raised this awareness indicates that this objective was met.

Further work is needed in the area of provision of safe clinical handover in the reciprocal scenario — that is, when a patient is discharged from hospital to an ACH.

1 Envelope (revised version after trial) — front and back view 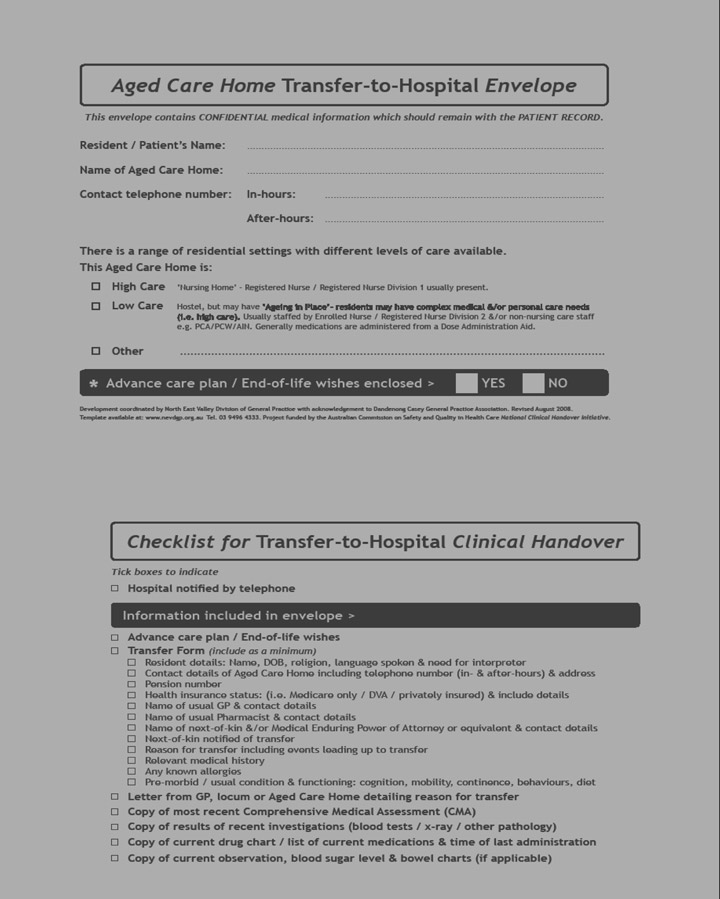 2 Management structure of the Envelope trial

Free website access: A template will be available on the website of the Australian Commission on Safety and Quality in Health Care (http://www.safetyandquality.gov.au) and the North East Valley Division of General Practice (http://www.nevdgp.org.au)

Commercial printing and distribution: The Envelope is available for purchase from Compact Business Systems (http://www.compact.com.au)