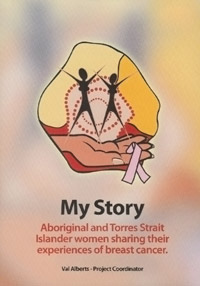 Cancer has not been a high priority on the Indigenous health agenda in Australia, despite being a major cause of death. Disparities in cancer mortality between Indigenous Australians and other Australians are not the result of a higher incidence of cancer among Indigenous people overall, but exist for reasons such as lower participation in screening; delayed presentation with symptoms; and poorer uptake of treatment. There have been few resources specifically for Indigenous people with cancer, so this 14-minute DVD, My story. Aboriginal and Torres Strait Islander women sharing their experiences of breast cancer, is a welcome contribution.

Six Indigenous women talk about how they came to be diagnosed with breast cancer and their subsequent journeys through treatment. The stories are engaging and rich in important health messages — Indigenous people do get cancer; Indigenous women should participate in mammography screening; don’t ignore symptoms; early diagnosis is important for cure; involving family members helps them know what you’re going through; one cancer doesn’t mean you won’t get another; it’s normal to be scared; breast prostheses help you feel and look better. To reinforce the importance of early diagnosis, the women point to their own survival — they wouldn’t be alive to tell their story unless treated early. The presentation also touches on issues of family history. Several scenarios mention the role that men can play in helping women with breast cancer — encouraging them to seek health care for symptoms, attending medical appointments to provide support, and helping children and other family members to understand.

Produced by James Cook University, the DVD has a Far North Queensland feel, with scenes of palm trees and beaches. It has an authenticity and positivity that contribute to it being a valuable health promotion and educational resource for Indigenous people. At the same time, its messages are universal, and the DVD will have broad appeal, especially among the nation’s many breast cancer support groups. An accompanying booklet means people are not reliant on having a DVD player to acquaint, or re-acquaint, themselves with the stories of the women.

Here’s hoping for more such endeavours to cover a wider range of cancers, and to convey cancer messages and education for Indigenous men.