Neville Wilmer was born in Townsville on 17 August 1918. He attended several state schools across North Queensland and was a border at All Souls School, Charters Towers, before studying medicine at the University of Queensland in Brisbane. During his undergraduate days, he excelled in swimming, boxing and rugby. 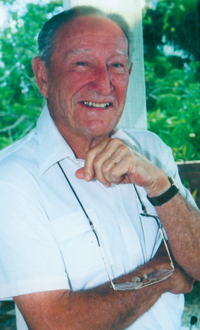 After graduating in 1941, Neville worked as a Resident Medical Officer at the Royal Brisbane Hospital (RBH), then joined the Army and served with the 7th Division in Papua New Guinea. In 1945, he was sent to Timor to participate in the Japanese surrender.

On his return to Australia, Neville worked for another year at the RBH before entering general practice in Gympie in 1947. He remained there until his retirement in 1988, providing full surgical and obstetric services as well as general practice.

Neville was in the group of 16 doctors who sat the first Royal Australian College of General Practitioners (RACGP) examination in Queensland. He also made significant contributions to the RACGP in Queensland, being a member of the Faculty Board (1969–1982), the Research Committee (1970–1982), the Electives Advisory Sub-committee (1980–1982) and the Courses Approval Sub-committee (1979–1982), as well as a Supervisor for the Family Medicine Program (1980–1988). He also held positions as President and Secretary of the Gympie Local Medical Association and was a strong supporter of the Australian Medical Association (AMA). He was made a Fellow of the AMA in 1984.

Neville performed the first exchange transfusion in Gympie (the first conducted outside Brisbane), and set up the Blood Bank in Gympie, which was later taken over by the Red Cross.

For nearly 50 years, Neville served the people of Gympie, honouring the fine ideals of good patient care and making a positive commitment to civic welfare, for which he earned the high regard of the community. He was an Alderman on the Gympie City Council from 1961 to 1964 and was active in the local Returned Services League and many other community groups. A keen golfer, he played regularly at the Gympie Golf Club.

Neville was awarded the Medal of the Order of Australia in the Queen’s Birthday Honours in 2008 for his services to medicine and the community of Gympie.

He died in Gympie on 9 August 2008 and is survived by his children Neridah and Quentin and their families.