Objective: To characterise the nature and impact of World Youth Day (WYD) 2008 on emergency department (ED) presentations at key hospitals.

Results: 191 pilgrims presented at the two EDs during the study period, comprising 7.8% of all visits to these EDs. Pilgrims had a median age of 22 years, and most were international visitors. The female-to-male ratio was 1.7 : 1. The most common diagnoses were lower limb strain or sprain, infections, and acute asthma. Pilgrims presented with less severe illnesses (with lower triage scores), and were less likely to be admitted to hospital than other patients.

Conclusions: The pilgrim caseload was small, and these presentations were less acute and less likely to result in admission than non-pilgrim presentations. Thus, the overall impact on the hospitals was very small.

The World Youth Day (WYD) Catholic youth festival was set up by Pope John Paul II in 1986. It is held in a different location every 2–3 years, and attracts large crowds of local and international pilgrims, particularly for the final Papal Mass (Box 1).1

There have been no published studies on the impact of WYD events on hospitals, although prehospital care3 and systems for syndromic surveillance4 have been examined. Compared with other pilgrimages, WYD is unusual in that the pilgrimage is not to a holy site, as with the Hajj, whose health implications (eg, heatstroke, infection) have been well described.5,6 Instead, the festival is held in different cities, and the religious significance is largely in the Papal visit. Further, it is targeted to youth, which may affect the types of presentations.

NSW Health public health surveillance provided a unique opportunity to describe the patterns of illness and presentation of WYD pilgrims. Most WYD 2008 events occurred within the inner city of Sydney (Box 2), which is mainly served by Sydney Hospital and St Vincent’s Hospital. We examined the impact of pilgrim presentations on these hospitals’ emergency departments (EDs), and any extra hospital workload associated with the event.

WYD-related presentations to the EDs of St Vincent’s Hospital and Sydney Hospital were prospectively captured as part of NSW Health public health surveillance, from 9 to 23 July 2008. The period included several days before and after the 6 days of events, to capture presentations of pilgrims who arrived early or stayed late.

Triage nurses asked patients whether they had been attending or were registered attendees at WYD events; if they responded “yes” to either question they were considered pilgrims. Patient details were collected and stored in the Emergency Department Information System.

The resulting dataset was analysed and compared with the background ED caseload. Non-identifiable data from medical records of each presentation were examined and coded by presenting complaint and final diagnosis. Other variables examined were age, sex, country of birth, Australian residency, severity as measured by the Australasian Triage Scale (ATS; category 1 = immediately life-threatening; 2 = imminently life-threatening or important time-critical treatment; 3 = potentially life-threatening or situational urgency; 4 = potentially serious, situational urgency or significant complexity or severity; and 5 = less urgent or clinicoadministrative),7 and whether admitted to hospital.

The study was approved by the St Vincent’s Hospital Human Research Ethics Committee (file no. 08/134).

Pilgrims were younger than non-pilgrims, with a median age of 22 years, compared with 38 years for non-pilgrims (P < 0.001).

ED visits from overseas pilgrims predominated, with 123 (64.4%) from outside Australia. Thirty pilgrims were from New South Wales or the Australian Capital Territory, and 38 were from other parts of Australia.

Of the 45 pilgrims admitted, 29 were admitted for less than 24 hours. One was admitted to a critical care unit. Compared with other admitted patients, pilgrims who were admitted were less likely to have been triaged as category 1 or 2 (11.1% v 28.5%; P = 0.01).

We found that WYD 2008 resulted in a relatively small caseload of extra presentations at the two EDs closest to the events. Presentations were less acute and less likely to result in admission. Further, when compared with the background level of presentations, pilgrims resulted in an even smaller workload for the EDs and resulting bed-days needed. As such, these presentations did not have a significant impact on other patients’ care or on hospital resource availability.

Our study focused on the impact on EDs and hospitals, and is therefore limited in applicability to those settings. Although prehospital data were not analysed, prehospital presentations requiring transport to hospital from the inner-city area were captured. We did not capture data from presentations to other Sydney hospitals or outer metropolitan hospitals. As such, the primary outcome examined was the impact of the main events and tourist pilgrims in inner and eastern Sydney (Box 2). The hospital on the other side of the site of the Final Mass received 68 pilgrim attendances of similarly low acuity during the study period (Barbara Daly, ED Nursing Manager, Prince of Wales Hospital, personal communication, 2008).

Pilgrim presentations were mostly confined to the 6 days of official events, and were consistent with the relative proximity of each hospital to the events on that day. There were more presentations to Sydney Hospital on the days of the Opening Mass and Papal arrival in the nearby central business district, and there were more presentations to St Vincent’s Hospital on the days of the Evening Vigil and Final Mass at Randwick Racecourse (2.5 km from St Vincent’s Hospital).

Pilgrim presentations were less acute, and less often required admission compared with the other patients, as seen in previous research.8 As expected, many visits were due to falls and other injuries, flu-like illnesses and gastroenteritis, reflecting existing data on Australian mass gatherings.9 A sizeable minority of medical problems were exacerbations of chronic diseases, such as asthma. This reflects the experience in other pilgrimages, in particular with diseases requiring good ongoing management, which may be disturbed by travel and a new environment.10

Drug- and alcohol-related presentations were exceedingly uncommon in pilgrims. Similarly, there were few violence-related injuries. The religious, values-based nature of the event may have played a role.

Most pilgrims were young, in keeping with the theme of the event and in contrast to other types of Papal visits, which may be attended by older pilgrims.11 This may partly account for the low acuity and burden of disease observed.

Pilgrims were more often women, while the normal caseload of the two EDs has a higher proportion of men than women. As there were no epidemiological differences between these men and women, this probably reflects the profile of registered pilgrims with a female-to-male ratio of 1.25 : 1 (Katrina Lee, Director of Catholic Communications and Broadcast Manager, WYD 2008, personal communication, 2008). A study of Australian pilgrims to the previous WYD (2005) under the age of 18 years found that 65% of those surveyed were female.12

Compared with the well described effects of the heat in mass gatherings11,13,14 and the Hajj pilgrimage, the cold was the environmental factor anticipated in this event.15 Taking place in winter, air temperature throughout the event was seasonably low, with minimal rain. Notably, many thousands of pilgrims attended an overnight vigil before the Final Mass, sleeping outside in the open while air temperature dropped to 8.6°C. Despite this, there were no admissions for exposure or hypothermia. A message about the need to stay warm overnight had been stressed by the Ambulance Service of NSW and NSW Health.15

Analysis of mass gatherings in Australia generated a range of predicted hospital attendance of 0.01 to 0.55 per 1000 event participants.9 We uniquely describe a multiday complex mass gathering with more variables than a sporting event16,17or a rock concert.18 By dividing the presentations recorded in this study by the overall attendance given by the event coordination body, there was an attendance rate of about 0.05 per 1000 event participants per day for the inner-city hospitals studied (although this does not account for pilgrims who may have been treated at other hospitals). This confirms that WYD lies in the lower range, and as such has a lower impact on hospitals. Our study, which also analysed hospital admissions, documented the low burden on hospitals, whereas most existing literature reports aggregated prehospital presentations in a variety of health care settings.

At a time of globally strained health care resources, our findings show that the impact of this kind of event on EDs and hospitals can be minimal. As such, this study adds to the limited existing literature on Papal visits, and on the health care burden of mass gatherings more generally. This understanding should contribute to planning and resource allocation for future events. 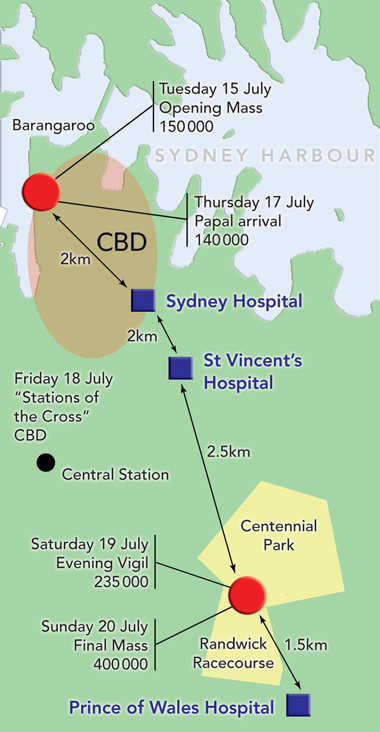 3 Pilgrim emergency department attendance by day during and around World Youth Day, July 2008