The Guardian newspaper1 and a recent commentary in the Lancet2 have drawn attention to the health and human rights situation in West Papua. Assertions made in these articles are consistent with those in other recently published reports of the marginalisation and impoverishment of indigenous West Papuans.3,4

In considering the health of West Papuans, we apply the United Nations definition of “human security”, which includes but goes beyond issues of personal and communal safety to encompass economic, environmental, educational, health and political conditions.5 Each of these elements gives cause for concern in West Papua. Of relevance too is the World Health Organization’s renewed commitment to the Alma-Ata Declaration, emphasising the importance of social and economic conditions in shaping a community’s capacity to achieve optimal health and wellbeing.6

Remarkably, the situation in West Papua has until now not received attention in the Australian medical literature. For this overview of the health situation in West Papua, we draw on existing documentation, including data collected by a non-government organisation in West Papua, Médecins du Monde. This organisation is working in primary health care and in building human resource capacity in the Puncak Jaya district in the central highlands, with a special focus on HIV/AIDS and tuberculosis. We also incorporate preliminary observations from an ongoing mental health project with West Papuan refugees in Australia.2 The Australian project is applying both qualitative and clinical measures to document the histories of West Papuan refugees, explore their resettlement trajectories and acculturation experiences, and assess their psychological responses to past trauma and ongoing stresses.

From the available evidence, we draw attention to three key areas relevant to health, rights and human security in West Papua; namely, reports of organised violence perpetrated against Papuan society, the social and health status of West Papuans (with a particular focus on HIV/AIDS), and the effects of mineral extraction on the culture and cohesion of the society.

West Papua forms the western half of the island of New Guinea. In the 1960s, the colonial power, the Netherlands, took steps to prepare West Papua for independence at the same time as Indonesia laid claim to it as part of the former Netherlands Indies. Leading Western powers granted Indonesia stewardship of West Papua in 1962, pending a referendum on independence. In 1969, after a UN-brokered referendum, West Papua was incorporated formally into the Republic of Indonesia, a process supported by Australia. However, less than 1% of the population of 700 000 actually voted in the referendum, with the overseeing chief UN officer declaring that the “Act of Free Choice” was anything but democratic.3 Pro-independence groups have continued to resist Indonesian dominion, but demands for a fully representative referendum on independence have not been heeded. With the transition from the Soeharto era, Indonesia granted the province “Special Autonomy” in 2001.2 The Special Autonomy Law No. 21 2001 involved the establishment of a West Papuan representative Council (Papuan People’s Council), with the aim of giving indigenous Papuans more power over their own affairs, protecting their basic rights, and improving their standards of health, economy and education. In effect, it appears to have had no impact on these issues.

Allegations of repression and violence

Since the 1960s, concerns have been raised that Indonesian authorities have been responsible for a campaign of repression and violence, resulting in the deaths of a large number of West Papuans.4 Instances of murder and abuse have been documented3 but, because of obstacles to outside agencies’ access to the province, there is no accurate documentation of the number of West Papuans killed. Indonesian authorities have not formally investigated these allegations.7 Nevertheless, recent reports have detailed politically motivated abuses in the province,2-4 and these reports are supported by accounts given by West Papuan refugees involved in our Australian-based project. The UN Committee against Torture stated that it was

. . . deeply concerned about the numerous ongoing credible and consistent allegations, corroborated by the report of the Special Rapporteur on Torture and other sources, concerning routine and widespread use of torture and ill-treatment of suspects in police custody . . . especially in Papua, Aceh and in other provinces where there had been armed conflicts.8

Health care standards are lower in West Papua than in other regions of Indonesia.9 District health data from the Puncak Jaya district indicate that infant mortality is about 85–150 per 1000 live births, with the figure for those under 5 years of age being 30–50 per 1000 (unpublished data, Médecins du Monde). Treatable diseases, particularly pneumonia and diarrhoea, are common causes of mortality in children. Data from across West Papua suggest that malaria, upper respiratory tract infections and dysentery are the major causes of childhood morbidity.10

Maternal mortality is three times higher than for the remainder of Indonesia,10 standing at 500–1000 per 100 000 births, with postpartum haemorrhage being a major cause.9,11 Medical facilities are understaffed and under-resourced. The ratio of doctors to population varies according to the area, ranging from 1 : 2000 to 1 : 23 000, with doctors being concentrated in urban areas.7 A Puncak Jaya legislative board report held by Médecins du Monde (Puncak Jaya District Health Office, 2008) indicated that only 8% of the district budget is allocated to health services. Clinics face a shortage of essential medications. Underfunding and lack of support have resulted in key personnel abandoning their posts, further undermining the already fragile district-level health services.

According to AusAID, the rate of HIV/AIDS in West Papua is 1.03%, compared with 0.17% in the remainder of Indonesia.11,12 AusAID estimates that by 2025, the adult prevalence of HIV/AIDS in West Papua could rise to 7%, compared with a projected 1.08% for the remainder of Indonesia.12 Data from Médecins du Monde indicate a growing HIV epidemic in the highlands, with an estimated population prevalence of 2.9%.13 Rapid social change associated with population movements increases the risk of spread of HIV to many areas in West Papua, including the highlands. In the financial year 2007–08, the Australian government provided a total of $14.5 million to Indonesia to commit to West Papua for HIV prevention.12 In addition, the Australian government has recently invested $100 million in a 5-year program aimed at preventing the spread of HIV in neighbouring Papua New Guinea (PNG).14 With an eye on the potential spread of HIV to Australia through the porous border with the Torres Strait, a coordinated program focusing on West Papua and PNG is imperative. Unless the approach addresses the social, political and economic disruptions in West Papua and their potential impact on the entire New Guinea landmass, a focus on distributing condoms and initiating health promotion campaigns is unlikely to be adequate. HIV/AIDS therefore needs to be considered as a complex regional issue, with conflict and social disruption in West Papua being a major factor leading to its spread. 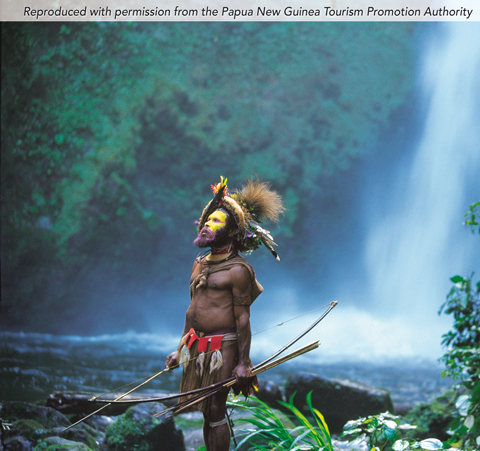 Effects of mining on traditional lives and wellbeing

The Guardian article asserts that mining operations are not complying with adequate health and safety standards, resulting in the release of toxic waste into rivers, destruction of natural vegetation, deforestation and flooding.1 As a consequence, local communities are facing the loss of their traditional livelihoods and mass displacement from their lands. In addition, the influx of large numbers of migrants from other parts of Indonesia to work in the mines and plantations is leading to fundamental changes in the demography and culture of affected regions. Unchecked migration continues to displace the poorest people from jobs and land, invariably the indigenous Papuans. The risk is that Papuans will become a minority group in their own homeland. Whereas indigenous Papuans comprised 96% of the population in 1971, they accounted for only 59% in 2005.15

What we can do

Although data are limited, the evidence suggests that West Papuans are experiencing a major challenge to their human security, and that the community’s capacity to improve its own health is greatly restricted when considered according to the principles of the Alma-Ata Declaration. Australia’s limited focus on the health and human rights of West Papuans is notable, given that New Guinea is our closest regional neighbour and Australia’s aid program to PNG is the largest in our region. A fragile political relationship with Indonesia, together with geopolitical and economic considerations, undoubtedly influence Australia’s present stance.

Australian medical professionals have a proud record of contributing to the health care of conflict- and disaster-affected societies in our region, and this tradition should extend to West Papua. We can advocate for more aid funding for health, as long as there are safeguards to ensure that projects are implemented with integrity. Greater support could be given to local and international medical organisations, both those working in the province and among refugees on the PNG side of the border, to improve primary health care, to prevent the spread of infectious diseases, and to ameliorate the psychosocial effects of trauma and displacement. Australian professionals could also forge stronger links with academic and medical institutions in West Papua, offering training and exchange programs that would assist in overcoming the isolation of health personnel in the territory.

There is a need to advocate for greater access to West Papua by the media, human rights organisations and researchers. This would allow more accurate monitoring of key indicators, providing data to clarify the impact of human rights conditions, ecological damage, and social and cultural disruptions on communal health and wellbeing.15 There is ample evidence from other settings to demonstrate the adverse impact of political conflict and the neglect of human rights on the general and mental health of indigenous peoples. We can draw on experiences elsewhere to show how political instability, the disintegration of communities, and population displacement can hasten the spread of HIV and other communicable diseases.

This commentary aims to encourage Australian health professionals to play a more active role in addressing the ongoing neglect of health and wellbeing in West Papua. We have a special regional responsibility to ensure that the right to health for all applies equally to indigenous West Papuans.