Objective: To determine the association, if any, between male-pattern hair loss (baldness) and serum 25-hydroxyvitamin D (25-OHD) levels.

Design and participants: A cross-sectional study of 296 healthy middle-aged and older men.

Main outcome measures: Degree of baldness was independently assessed by two researchers using the Hamilton–Norwood scale and serum 25-OHD was measured in all men.

Results: Classification of the degree of baldness by the two researchers showed a high level of agreement (κ = 0.93). Forty-eight per cent of men had no hair loss or mild frontotemporal recession, 15% had predominant vertex loss, and 37% had significant scalp and vertex loss. After data were adjusted for potential confounding factors — including age, month of 25-OHD measurement, exercise levels, use of sunscreen, skin type and frequency of outdoor hat wearing — no significant differences in 25-OHD levels between these groups was detected (P = 0.60).

Conclusions: The degree of baldness does not appear to influence serum 25-OHD levels. The high prevalence of baldness in older men does not explain sex differences in 25-OHD levels. Other novel hypotheses are required to help determine whether baldness serves any physiological purpose.

Vitamin D insufficiency is very common in older people,1 and many cross-sectional studies of older populations have reported higher levels of 25-hydroxyvitamin D (25-OHD) in men than in women.2-4 These differences have not been adequately explained but have been attributed to sex differences in behavioural and cultural factors associated with sun exposure.4

Male-pattern hair loss (baldness) occurs almost universally with ageing in men, and more than 70% of men older than 70 years have significant hair loss.5 As vitamin D production in humans occurs in exposed skin, particularly in the hands, arms and face,6 we hypothesised that men with more baldness would have more exposed skin suitable for vitamin D production and, consequently, higher serum 25-OHD levels. If so, baldness in men might explain sex differences in 25-OHD levels. Also, preservation of vitamin D status might provide an evolutionary explanation for the high prevalence of baldness in older men. We therefore assessed whether 25-OHD levels are associated with degree of baldness in middle-aged and older men.

We recruited 323 healthy, independent-living, middle-aged or older men to take part in a study on calcium supplementation. Full details of the study protocol have been published elsewhere;4 briefly, men aged 40 years and older, who did not have significant medical disease and were not receiving cholecalciferol supplements in doses exceeding 1000 IU/day, were eligible to take part. This substudy was approved by the Northern X Regional Ethics Committee. 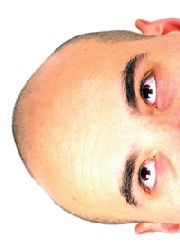 A total of 296 men consented to have photographs of the head taken. Degree of baldness was independently assessed by two of us (M J B and R W A); the photographs were compared with standardised pictures from the validated Hamilton–Norwood scale for assessing male-pattern hair loss.5 Results were then grouped into three categories: no hair loss or mild frontotemporal recession (Group 1), predominant vertex loss (Group 2), and significant scalp and vertex loss (Group 3).

Lifestyle information, including the frequency of outdoor hat wearing and whether sunscreen was applied to the scalp, was gathered using a questionnaire. Skin type was self-rated by participants using the Fitzpatrick scale7 (Box). Serum 25-OHD was measured by radioimmunoassay (DiaSorin, Stillwater, Minn, USA) in the first 192 men who were recruited, then using a chemiluminescence assay (Nichols Institute, San Juan Capistrano, Calif, USA) in the other 104 men. All data obtained using the Nichols assay were converted to predicted DiaSorin results, as previously described.4

Initial assessment of baldness showed a high level of agreement between the two researchers (κ = 0.93). In 13 men for whom there was disagreement, degree of baldness was reclassified by consensus. In the final classification, 141 men had no hair loss or mild frontotemporal recession (Group 1), 45 men had predominant vertex loss (Group 2), and 110 men had significant scalp and vertex loss (Group 3). The descriptive and biochemical characteristics of the three groups are shown in the Box. There were significant differences between the groups for age, use of sunscreen on the scalp, and frequency of outdoor hat wearing.

After adjusting for potential confounding factors — including age, month of 25-OHD measurement, exercise levels, use of sunscreen on the scalp, skin type and frequency of hat wearing — there were no significant differences in 25-OHD levels between the groups (F2,242 = 0.48; P = 0.60). Analyses that controlled for each of these factors individually produced similar results.

Analysis restricted to men in Groups 1 and 3 who did not use sunscreen on their scalp and did not often or almost always wear a hat outdoors revealed that the mean 25-OHD level was higher in Group 3 (91 nmol/L [SD, 35 nmol/L]) than Group 1 (85 nmol/L [SD, 31 nmol/L]), but this difference was not statistically significant (F1,92 = 0.54; P = 0.50). However, the study did not have sufficient power to detect a difference of this magnitude.

Finally, when the above analyses were repeated using raw 25-OHD values (ie, before Nichols assay values were converted to predicted DiaSorin results) and controlling for the 25-OHD assay, the results were similar.

We found no evidence to support the hypothesis that the degree of baldness in men influences serum 25-OHD levels. This might be because vitamin D is not produced in the scalp and therefore baldness would not influence vitamin D status. Another possibility is that vitamin D is produced in the scalp but men with greater degrees of baldness are more prone to scalp sunburn, and hence modify their behaviours accordingly. These men might be more likely to avoid sun exposure, use sunscreen and wear hats — all of which are associated with lower 25-OHD levels.6 In this study, we did not directly measure time spent outdoors or level of sun exposure, but physical exercise (an indirect measure of time spent outdoors) was not associated with degree of baldness. However, men with greater degrees of baldness were more likely to use sun protection (use sunscreen on their scalp and wear a hat). We cannot exclude the possibility of bias attributable to undisclosed use of hairpieces or “comb over” techniques8 that might reduce scalp exposure to sunlight.

Our findings suggest that baldness in men does not explain the reported sex differences in 25-OHD levels, which are likely to be due to sex differences in sun exposure and the use of sun protection. The findings also suggest that shaving of the head (a current trend favoured by celebrities and professional sportspeople) may not affect vitamin D status.

We conclude that baldness does not appear to have an effect on vitamin D status. We are not aware of any reported health benefits of baldness; although some contend that it might offer a selection advantage,9 there is no accepted evolutionary explanation for the almost universal prevalence of hair loss in older men. We suggest that other hypotheses are required to determine why older men go bald and whether baldness serves any physiological purpose.

Characteristics of healthy, middle-aged and older men with varying degrees of baldness

All but one of the male authors has a full head of hair.