Many artificial and natural disasters result in threats to public health beyond those caused by the event itself. Threats posed by communicable diseases and the post-disaster physical environment are often overshadowed by the more visible acute response by ambulance and clinical services. Planning for and responding to these threats require the expertise of public health professionals, but it is only fairly recently that they have been involved in emergency response planning.

In Australia, we have been fortunate that such disasters are rare. However, this scarcity of events means that it is difficult for our public health emergency planners and responders to gain real-life experience and maintain disaster preparedness. Key involvement of public health services in preparing for potential threats (eg, bioterrorism, severe acute respiratory syndrome [SARS], avian influenza, and pandemic influenza) has raised the profile of the sector in emergency planning over the past decade.

Planned mass gatherings, although not emergencies, share a number of features with them. They present opportunities for public health emergency planners and responders to gain additional emergency management experience by working alongside other emergency responders from health and other agencies. The health emergency response sector in New South Wales, including public health services, has gained valuable experience from planning for recent mass gatherings, including the Sydney 2000 Olympic Games, the 2003 Rugby World Cup and the Leaders Week of APEC (Asia-Pacific Economic Cooperation) Australia 2007.

World Youth Day (WYD) 2008 was a mass gathering of Catholic youth held over several days in July 2008 in Sydney. Festivities commenced with gatherings across Australia during a cultural exchange event called Days in the Diocese. Following this, young people from around the world converged on Sydney. About 100 000 individuals stayed in simple accommodation, such as school halls, around the greater Sydney metropolitan area. At the end of the week, an outdoor Evening Vigil with over 200 000 participants preceded the Final Mass, which was attended by about 400 000 people.1

NSW public health service workers drew on their own experience, gained from preparing for other mass gatherings, and on the experience of public health services of other countries that had hosted WYD events,2,3 to consider risks to the health of participants and the community during WYD 2008. Key risks identified were communicable disease outbreaks (due to endemic local diseases such as influenza, and the possibility of imported diseases not seen in Australia) and environmental health issues (particularly considering the temporary and basic nature of much of the mass accommodation). The need for pre- and intra-event health promotion messages was identified, including ensuring that participants were aware the event was taking place in the southern hemisphere winter, unlike previous WYDs (which took place in the northern hemisphere summer).

Public health planners worked closely with the whole-of-health planning team and event organisers to enhance awareness of potential health risks to participants, and strategies for mitigating these risks. This included developing infection control guidelines for mass accommodation facilities, publicising health promotion messages (including hand hygiene, respiratory etiquette, tips on keeping warm, and the importance of vaccination against common infectious diseases), working with the NSW Food Authority and local government to promote safe food choices, and advising on appropriate numbers of toilets and showers.

The command, control and coordination structures replicated those in the NSW Health disaster plan, Healthplan.4 A Public Health Emergency Operations Centre (PHEOC) was established, with links to the Health Services Disaster Control Centre (HSDCC; which coordinated the whole-of-health response and liaised with event organisers and other emergency response agencies) via a public health liaison officer at the HSDCC. Protocols and procedures for the PHEOC accorded with the Australasian Inter-service Incident Management System (AIIMS).5

Although public health personnel do not usually wear uniforms, staff involved in the WYD response were provided with a uniform and emergency response tabards to help recognition within teams and by external organisations in the field.

NetEpi,6 an Internet-based public health outbreak management software program, was used to monitor presentations of conditions of interest across the onsite medical units, and by NSW public health units in the field. A password-protected interactive website (“wiki”) was established to post updated protocols and documents in the planning and response phases, and to provide situation reports to the public health community. A fleet of laptop computers with multiple modes of Internet connectivity were purchased to provide flexible online response capacity across field sites.

Careful workforce planning was required to allow public health personnel to continue to carry out their core business while assisting with WYD activities. During WYD, the PHEOC was operational every day for 16 hours a day, resulting in a need for extra security and staff transport requirements.

Extra surveillance staff were sourced from the NSW Public Health Officer Training Program and from the Masters of Applied Epidemiology program at the Australian National University. Environmental health officers (EHOs) were recruited from public health units across NSW, and staff from public health laboratories were requested to increase their alert level.

Laboratory planning included provision of couriers for pathology specimens from onsite medical units, and use of dedicated WYD request forms to ensure that high-priority specimens were processed effectively and that results were rapidly communicated to operations personnel, and to track costs.

Robust communication systems between field staff, and between PHEOC and field staff, were recognised as a priority — both for information flow and for the safety of staff. Mobile phones were issued to field staff, and email accounts and remote network access were arranged for particular position holders. Radios were also provided (as it was expected the mobile phone network might not cope with the surge in use during the Final Mass), and training in their use was provided.

In the days before WYD, daily teleconferences with staff responding to public health incidents among pilgrims during Days in the Diocese enabled consideration of potential public health response challenges during the main event. These included problems communicating with participants (who were occupied with organised events for most of the day) and event organisers (who were busy with events), and problems with gaining information about destinations (within Sydney) of participants who were identified as unwell.

As anticipated, communicable disease among the pilgrims was the major public health issue during WYD, with over 30 clusters of cases (“outbreaks”) of influenza (arising from five simultaneously circulating viruses), three outbreaks of gastroenteritis, and a single case of varicella infection.

It was noted early in the influenza outbreaks that the attack rate and morbidity appeared to be much higher among the participants than would have normally been expected for a young adult population. Balancing the resources needed to intervene in these outbreaks against the demand on clinical services that was expected to ensue if no intervention was undertaken, it was decided to: (a) identify outbreaks of influenza; (b) provide treatment with oseltamivir to anyone who appeared to be infected; and (c) offer prophylaxis with oseltamivir to high-risk contacts.

Over 30 influenza outbreaks reported to the health advice line and through other sources, such as emergency department and on-site medical unit surveillance, were investigated. Two significant outbreak locations were at an accommodation site in Castle Hill (where over 700 people were accommodated) and the Sydney Olympic Park precinct (where over 10 000 people were accommodated during peak occupancy). Influenza clinics were established at each of these sites.

This activity required significant cooperation between public health and clinical services, including explanation to clinicians that the overarching objective of the response was to decrease the risk of transmission within the entire pilgrim group. During the response, many patients were treated with oseltamivir on the basis of a broad case definition — in other circumstances, some of these patients would have been advised to manage their symptoms with supportive measures only.

The conclusion of the final WYD event led to an exodus of participants from Sydney by air and road. To decrease the risk of pilgrims contracting influenza and gastroenteritis during this journey, thereby potentially delaying their exit from Australia and risking outbreaks at their home destinations, over 300 health and wellbeing packs were distributed to all pilgrim coaches departing for long-distance journeys, both interstate and to rural NSW.

Many participants who did not leave Sydney immediately after official events finished were relocated to the mass accommodation facility at Sydney Olympic Park, as school accommodation sites had to be vacated to make way for the returning student population. Influenza mitigation strategies were continued, including maintenance of the influenza clinic at the precinct and an isolation area for ill pilgrims, and health and wellbeing pack distribution to pilgrims entering the facility.

At the commencement of the main WYD activities, field EHOs reported witnessing a large number of trips and falls related to cable protection systems at event venues. This hazard correlated with presentations of injuries from falls to first aid posts and to onsite medical units. Communications to the organisers led to implementation of risk-reduction measures, such as painting the hazards red and enlisting volunteers to hold up warning signage.

Cold weather at the commencement of the week led to a review and enhancement of plans for responding to multiple presentations of people with hypothermia during the mass sleep-out event preceding the Final Mass. Public health services liaised with medical services in the development of plans that included triggers for response (for example, calling in volunteers to staff a mass re-warming facility), review of treatment protocols, stockpiling warm clothes, and discharge planning. Fortunately, by the time of the mass sleep-out the weather had improved, and few cases of hypothermia were recorded.

WYD was a unique mass-gathering event for Australia, with characteristics that posed particular challenges for public health. Although it was a planned event, and one that is unlikely to be experienced again in NSW for some time, lessons from WYD are being incorporated into public health emergency management planning in this state. This includes a reinforcement of understanding the importance of public health being part of the event-planning process for mass gatherings, maintaining readiness for mobile team deployment, further development of information management systems (including interactive websites), considering future training requirements, and methods for increasing public health surge capacity in emergencies. 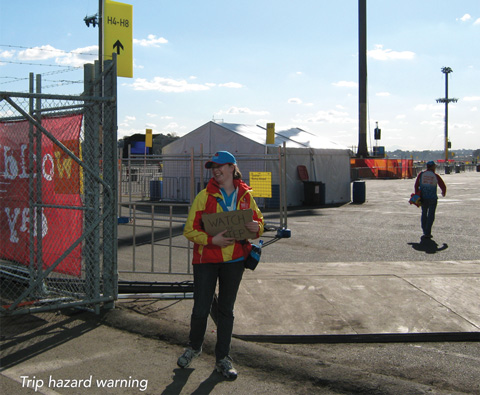 The guidelines for pilgrim mass accommodation centres are now being reviewed and integrated into major evacuation centre planning, including the need to be active in managing outbreaks of disease in an enclosed, crowded community that would normally not require an intervention in the wider community. The sanitation needs of converting space not normally used for mass accommodation were reinforced, and will assist in further developing guidelines for major evacuation centres.

The response to influenza outbreaks that occurred during WYD has implications for planning for pandemic influenza and other large-scale infectious disease outbreaks. When an effort is being made to contain the spread of such a disease, it may be more effective for multidisciplinary, rapid-response teams to be sent to a site (eg, a school or a workplace) than to expect people to present to designated health care facilities. These teams would comprise public health and clinical personnel, and would need to have a clearly stated goal for management of the outbreak that included population health (eg, to limit spread of disease in the community) and clinical (eg, to reduce individual morbidity) objectives.

There is also a need for integrated training of health emergency responders, so that incident command, ambulance, mental health, medical, public information, and public health services clearly understand their respective roles and skills. This will help all command and field personnel understand the concerns of their co-responders when a large-scale multidisciplinary operation is underway. 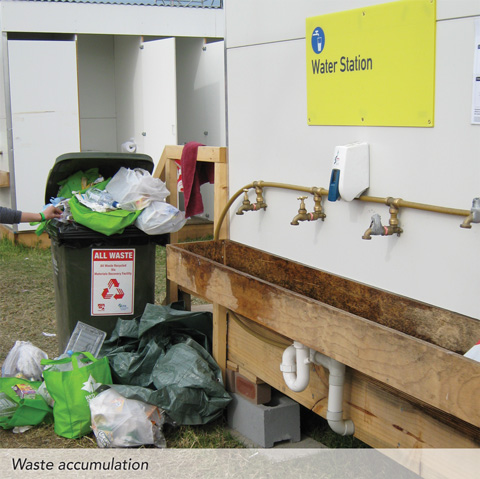