Design and setting: A prospective multicentre assessment of IV KCl prescribing and administration at six public hospitals (three large metropolitan hospitals, a smaller metropolitan specialty hospital, and two rural hospitals) in Victoria between August and December 2006. Data were collected for either a 4-week period or for 200 IV KCl orders, whichever occurred first, in clinical areas where concentrated KCl ampoules were available.

Main outcome measures: Number and type of IV KCl prescriptions and dose administrations; method of preparation and administration of each dose.

Results: A total of 888 prescriptions and 1088 administrations were assessed across the six hospitals. There were 69 different types of orders for IV KCl, varying in either concentration or volume. KCl ampoules were used in 59% of all administrations of IV KCl. In instances where the prescription matched an available premixed IV KCl infusion, the premix was used on 89% of occasions.

Conclusions: There is significant variability in the prescribing and administration of IV KCl in these Victorian hospitals. New formulations of premixed IV KCl infusions may enable the removal of ampoules from patient care areas. The medical profession can play a major role in driving the adoption of consistent practice and supporting and leading this important safety initiative.

Fatalities due to errors associated with inappropriate bolus injection of potassium chloride (KCl) concentrate from ampoules have been reported in many countries, including Australia.1-5 A search of the National Coroners Information System database in October 2006 identified six deaths from KCl administration in Victoria since 1992, and it is possible that this is an underestimation due to coding errors, missing data or under-reporting. The main reason fatal errors occur is that ampoules of concentrated KCl have a very similar appearance to ampoules of normal saline or water (see Box 1). If injected in place of normal saline to flush an intravenous (IV) line or used instead of water to reconstitute a vial of antibiotic, the bolus effect of the KCl can lead to cardiac arrest.

As a result of such fatalities, several countries have issued medication alerts and made recommendations to improve the safety of IV KCl use.6-8 A 2003 medication alert issued by the Australian Council for Safety and Quality in Health Care stated that the availability of KCl ampoules as medication stock in patient care areas was the root cause of errors.6 The Council’s recommendation was to remove KCl ampoules and replace them with premixed KCl infusions (a manufactured infusion bag containing KCl), which can be administered without any manipulation in a patient care area.

The degree to which this recommendation has been incorporated into practice in Australian hospitals is variable. In some hospitals, removal of KCl ampoules has occurred in general wards9 but not in specialty areas, such as intensive care and haematology/oncology units, as there is no sufficiently concentrated, small-volume premixed KCl infusion available to meet the clinical needs of these patient groups. A survey of 25 Victorian hospitals in 2006 found that 23 had removed ampoules from the general wards, but only five rural hospitals had completely removed ampoules from the hospital.10

To our knowledge, no national review of practice has been undertaken since the Australian medication alert was issued in 2003. In the past year, about 70 000 concentrated KCl ampoules were used in Victorian public hospitals (Ian Barclay, Senior Contract Officer, Health Purchasing Victoria, personal communication), highlighting the significant opportunity for error. It is unclear whether the continued use of concentrated KCl ampoules in Australian hospitals relates to the manner in which KCl is ordered (ie, the prescription), the ongoing availability of KCl ampoules, the lack of availability of suitable premixed infusions, or lack of staff awareness of the risks.

We aimed to identify current practices in IV KCl prescribing and administration in Victorian hospitals, particularly in patient care areas where concentrated ampoules may be stocked, and to develop recommendations that could lead to the removal of KCl ampoules from specialty areas and reduce the potential for fatal errors.

A prospective audit of IV KCl prescribing and administration was undertaken at six public hospitals in Victoria between August and December 2006. These sites — three large metropolitan hospitals, a smaller metropolitan specialty hospital, and two rural hospitals — were chosen because they were representative of the range of Victorian hospitals. They were selected from 19 hospitals that responded to a request for expressions of interest that we sent to all hospitals identified from a government listing of health facilities.

Ethics approval for the study was not required by all hospitals, as the audit satisfied criteria for a quality improvement audit. However, some sites independently sought ethics approval from their own institution.

At each site, a project reference group, comprising pharmacy, nursing, medical and quality staff, was convened, and a project officer was funded. A central research team oversaw the development and conduct of the study. The audit methodology, process and tools were developed at the lead site by the research team. To ensure uniformity in the conduct of the audit at each site, the research team met with members of each site’s project reference group before commencement of the audit.

The project officer at each site collected data in clinical areas where concentrated KCl ampoules were available, for either a 4-week period or for 200 IV KCl orders, whichever occurred first. The metropolitan hospitals only audited specialty areas, but the two rural hospitals included general wards, as they had only low numbers of IV KCl orders in specialty areas.

Data recorded for all IV KCl prescriptions each day in each audit area were:

Orders for KCl prescriptions for haemofiltration, and phosphate injection products that contained potassium were not included in the analysis.

Prescriptions were classified into three categories:

Of the 1088 administrations in the audit, 495 (45%) were for small-volume concentrated infusions (concentration > 10 mmol in 100 mL) that could not be administered with an existing premixed infusion, as there is no suitable premixed infusion manufactured in Australia. Most of these (308) were for “when required” orders for 10–20 mmol KCl with minimal or unstated volumes, usually in intensive care patients.

There were 75 prescriptions resulting in 83 administrations of IV KCl for small-volume infusions of a concentration ≤ 10 mmol in 100 mL. Of these, the most frequent order was for 10 mmol KCl in 100 mL with an additive, such as magnesium. In these instances, the dose was administered using concentrated ampoules, because the available 10 mmol KCl in 100 mL premixed infusion bags did not have an additive port.

We found that concentrated ampoules of IV KCl are still available in hospital patient care areas, and there is significant variation in the prescribing and administration of IV KCl. Less than half of the doses of KCl were administered using the available premixed infusions. In Australia, there is no suitably concentrated, small-volume premix to meet the clinical needs of patients with central venous catheters. Even when a premixed infusion that matched the prescription was available, the concentrated ampoules were still used in 11% of instances.

Experiences elsewhere show that this problem is not unique to Australia. A recent study reported that 53 different IV KCl infusions were prepared in near-patient clinical areas in hospitals in the north of England.11 This occurred despite a United Kingdom National Patient Safety Agency recommendation that ready-to-use diluted infusions should be used where possible and, if an infusion of the required dilution is not available, it should be prepared in the hospital pharmacy.8

Traditionally, the choice of product for administration of IV fluids and electrolytes has not been considered to be a medical responsibility. A UK study found that doctors were not aware of procedures for storage or recording of IV KCl or obtaining it out of hours, claiming these to be nursing responsibilities.12

Our study has limitations that need to be considered in interpreting the findings. The audit was conducted in only six sites in Victoria and for a limited duration. Despite this, there is no reason to consider that our results are not reflective of practice elsewhere in Australian hospitals. Additionally, the audit did not include direct observation of practice, instead relying on documentation of prescribing and administration, stock movement, and information from staff. Data on actual errors or near-misses with IV KCl administration were not collected.

Our findings have significant implications for practice. Currently, KCl ampoules remain available in specialty areas in Australian hospitals and, as long as this continues, the risk that another potentially fatal error will occur also remains. Some hospitals have introduced extra safety measures for storing KCl ampoules in specialty areas;13 however, the most effective method of avoiding risk is removal of the hazard.14 This can only occur if suitable premixed infusions are available to replace ampoules.

The prescriber can make an important contribution by ensuring that, whenever possible, IV KCl is prescribed in a manner that facilitates the use of premixed infusions rather than concentrated ampoules. Nursing staff and clinical pharmacists can also play a role, by advising medical staff to prescribe IV KCl in such a manner.

A number of recommendations related to IV KCl should be considered for adoption. These include:

This study has demonstrated wide variations in prescribing and administration practices in relation to IV KCl within the hospitals audited in Victoria. New formulations of premixed IV KCl infusions may enable the removal of ampoules from more patient care areas. The medical profession can play a major role in driving consistent practice and supporting and leading this important safety initiative. 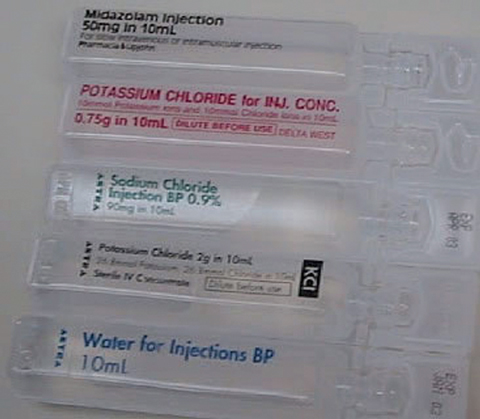 This project was supported by an unrestricted grant from Baxter Healthcare. The development, conduct and analysis of the project were independent of Baxter Healthcare. We thank the participating hospitals, their project reference groups and project officers, and Sarah Knight, Alison Whitlock, Amy McRae, Annabel McNally, the summer research students at The Alfred, Dr Chris O’Callaghan, Kent Garrett, Ms Anne McGrath, Dr Mark Lubliner and Dr Michael Bailey for their assistance and support.