The Northern Territory intervention: voices from the centre of the fringe

Yet now we bear witness to a moment in time when the very foundational principles on which Aboriginal existence are built — community, culture and collective rights — have been shaken, demonised and exposed to a level of scrutiny unparalleled in recent times. In no place has this been felt more acutely than in Central Australia.

In 2006, revelations offered by the Alice Springs Crown Prosecutor outlining an accumulated dossier of abhorrent cases of child sexual abuse in Central Australia were met with immense public horror.1 The response was understandable, but failed to acknowledge that the dossier echoed the voices of Aboriginal communities’ repeated calls for action over the span of several decades — voices that had been ignored.

The response, from public commentary and an increasingly vocal anti-Aboriginal-rights sector, was swift and damning, editorialising the suffering of Aboriginal communities. In many respects, a new (or rekindled) language emerged, the language of “Aboriginal deficit”. The media were awash with claims of “paedophile rings”, of a culture that “accepted and protected” the raping of children, of “customary law being used as a shield to protect abusers”.2,3 The inference was that all Aboriginal men are “perpetrators”, all Aboriginal children are abused, and that these abuses — fuelled by alcohol, petrol and kava — are compounded by social dysfunction that is largely the consequence of a “primitive” and “barbaric” culture. 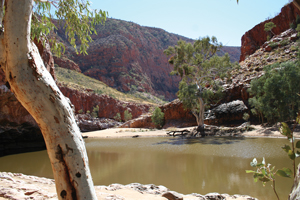 Public commentary allowed the seeds of change to be sown, change that “required” a “new paternalism”, “normalisation” or “mainstreaming”; that called for the closure of “unviable remote communities”; that touted the “failure of self-determination”; that required an end to “political correctness gone mad” and the “pouring billions of dollars down the toilet”.4,5 Unfortunately, such language has been used to justify blatantly discriminatory policy.

In response to public reports, the Northern Territory Government initiated an investigation into the issues of child sexual abuse. These issues were recorded, collated and considered within the Ampe akelyernemane meke mekarle: “little children are sacred” report.6

The ill health and profound disadvantage of Indigenous Australians, particularly of Indigenous children, is well documented, persistent and inadequately addressed. Aboriginal and non-Indigenous professionals and advocates have long called for necessary long-term commitment to and adequate resourcing of health, housing, education, employment and development. Communities have long demanded support for structures for civil society; sustainable environments; respect for cultural diversity; investment in social and human capital; access to high-quality, appropriate child and adult education; and equality of opportunity in the face of enormous disadvantage. Reams of recommendations have been listed, skimmed, ignored and filed — any number of which, if put into practice, could have made a sustainable difference on the ground for Indigenous Australians.

The “Little children are sacred” report, irrespective of its integrity and worthiness, joins a disturbingly long list of reports whose recommendations have been largely ignored. In comparison, however, it may well stand out as one of the most blatantly bastardised of all Aboriginal health reports, in that the federal government has “delivered” the NT intervention, in rhetoric, as a means of protecting Aboriginal children. Yet, despite claims that the report guided and was the impetus for the federal government’s intervention, surprisingly few of the report’s recommendations have been considered or implemented. In fact, many commentators have suggested that the report has been used as a shield to force the imposition of an existing federal government agenda to dismantle any semblance of collective and individual rights, native title, and self-determination among Australia’s first people.7

The announcement of the NT intervention was met with an almost audible collective sigh of despair across much (but not all) of Aboriginal Australia. In an instant, another weight was placed on Aboriginal communities, spelling a potential end to the progress made in generations of struggle for acknowledgement and recognition of Aboriginal people’s right to have some control over the future of their families and communities.

This is not to suggest that communities are not supportive of an array of intervention targets. Indigenous communities have long called for improved policing; measures to reduce alcohol-related harm; enhanced educational and vocational opportunities; and improved infrastructure, health services and community safety. In fact, in discussions with communities directly involved in the intervention in the NT, there remains strong support for any just and appropriate measures that deliver these. Yet there remains enormous confusion and concern over other elements of the intervention that seem unconnected to child health, such as compulsory land acquisition by the federal government; the abolition of entry permits for Indigenous communities and of Community Development Employment Projects programs; the appointment of government business administrators to “run” Indigenous communities; and the potential threat of community asset-stripping. Further, the legislation covering the NT intervention places unparalleled control of Indigenous affairs in the hands of the Minister (or his designated delegate), and is largely discretionary and, in critical elements, poorly defined. Unfortunately, we also bear witness to a moment in time when Parliament has allowed the passage of racially discriminatory legislation.

The most fundamental of all questions remains: will the intervention actually make children safer?

Unfortunately, there has been little public or professional debate on this issue. The federal government has largely polarised public discussion, reducing complex issues to narrow, unsophisticated arguments with little recognition of the inherent complexity of the causes and consequences of abuse, in all its forms — particularly in the context of profound disadvantage, marginalisation, trauma, grief and loss, and generations of governmental inaction and under-resourcing. Public debate has been dampened. In simplistic terms, the line is that “you are either with us or against us”. To fail to support the package in its entirety is to either be a child abuser or to accept and support child abuse. Yet, as professionals and citizens, it is our inherent responsibility to question the how, even if we agree with the why.

In the weeks and months following the announcement of the NT intervention, it has become clear that decisions were made in a policy and strategy vacuum. Activities have been poorly coordinated, poorly planned, and liable to change and backtracking. This has fuelled confusion and paranoia, and created enormous concern about the squandering of desperately needed resources, which are being used largely to install the bureaucracy rather than provide services.8

Worse still, the current approaches are undermining successful programs already in place in communities. The long fought-for resourcing and community actions required for healing, protecting and nurturing Indigenous children are being de-funded and ridiculed. Child health checks are already occurring; vaccination rates are generally high in Central Australia; many communities already have complete bans on alcohol; families voluntarily submit to “income management programs”; communities have established their own child protection services (because of the failure of government departments), and have progressed towards improved partnerships with police and child protection agencies, who, by their own admission, lack the capacity to adequately respond to reported cases of abuse.

Labelling the intervention as the response to a crisis that could not wait a single day longer to be rectified is a fallacy. The government has had countless offers of guidance to better direct the intervention elements, the child health checks, the necessary follow-up and long-term health and social needs. Yet these offers have been ignored.

The most worrisome elements of the intervention may lie in the likely and unintended consequences. Communities remain deeply concerned that there will be direct casualties of the intervention, casualties that communities can ill afford, but that the government considers necessary and acceptable “collateral damage” — worsening poverty, suicide and unemployment (particularly of Aboriginal men); disempowerment; the creation of an atmosphere of fear, in which complaints of abuse are less likely to be reported; and a “one size fits all” approach that frames all Aboriginal communities as dysfunctional, all Aboriginal people as abusers, and all Aboriginal children as abused.

It remains unclear how any of the intervention measures will create sustainable, safe and nurturing communities, or whether they will protect Aboriginal children at all, particularly in the face of decades of under-investment in the basic building blocks of healthy societies.

Despite the likely negative consequences, the intervention may offer opportunities to improve health and social outcomes and promote safer communities, but it remains to be seen whether this potential can be realised. The opportunity exists to focus our attention on the needs and priorities of our young people, to use best-practice models of health promotion and care for Aboriginal adolescents, and to make their safety and development a national priority. However, without a focus on healing, mental health and support for Indigenous youth, both now and over the long term, the intervention is likely to fail.

As a society, we must ask ourselves whether the current interventions will empower communities and support them appropriately, in a spirit of collaboration and respect, to adequately deal with the causes, triggers and consequences of abuse. Marginalisation, poverty, disempowerment, colonisation and trauma are the upstream contributors to psychological, physical and sexual abuse in the present. Yet the current policy is likely to deliver the very same things, and, as a consequence, risks perpetuating dysfunction and abuse. The government has yet to explain how the removal of Aboriginal people’s right to control or participate in decision making and implementation will promote their survival and protection.

The likely success or failure of the NT intervention may well rest on what mainstream Australia sees as Aboriginal people’s place within contemporary Australia. Are Aboriginal people simply an echo of a past worth forgetting, a relic of a barbaric and uninformed culture? Are we only good as footballers, athletes or performers in opening ceremonies? What of Aboriginal Australia’s aspirations for its own future, or is this something that a globalised community can ill afford to consider? The current policy approach rests on a false underlying assumption that all Australians must share the same values and aspirations.

The success or failure of the intervention may also depend on what we consider that Indigenous people offer contemporary Australia. Strength in diversity, wisdom, connectedness, humility and survival against the greatest of odds . . . in any other context these attributes would be regarded as national treasures, as a collective identity worth nurturing, building and embracing. Yet, in 2007, these qualities of our Indigenous people seem to be unrecognised or even disdained.

A nation and its people are judged on how they treat their most vulnerable, disadvantaged and marginalised. The significance of our current federal government’s refusal to ratify the United Nations Declaration on the rights of indigenous peoples9 has not been lost on Aboriginal people and their advocates.10,11 On the one hand, the government purports to be taking action to protect vulnerable Aboriginal children, yet on the other, it fails to support any national or international requirement or responsibility to recognise and acknowledge native title, cultural integrity, self-determination, and preservation of Indigenous knowledge and sovereignty, as set out in the UN Declaration.9 It is our responsibility, then, as individuals, professionals and as a nation, to ask how our government’s stance on these issues can coexist with the stated aim of protecting our most vulnerable, our children, our future.