For the first time, there is a real opportunity to deal comprehensively with the shameful situation of Indigenous communities in Australia — but the commitment needs to be huge

The girl undergoing a health check in a remote community in the Northern Territory has a delightfully cheeky grin. Recently arrived from a town camp on the outskirts of Alice Springs, she is in the care of a woman unrelated to her. About 9 years old, she pops up everywhere, desperate for attention. The health check reveals that she has ringworm, dental problems and a perforated eardrum from a chronic middle-ear infection. She also has a heart murmur brought on by an earlier bout of rheumatic fever. It is vital that she undergo an echocardiogram as soon as possible.

A boy aged 5 years is brought in by his mother, who is 36 weeks’ pregnant and has had no antenatal care. He and his mother have been camping rough. Although he is not here for a health check, the opportunity is taken to give him one with his mother’s consent. Although he looks happy and healthy, he is found to be anaemic and is given iron injections as well as the vaccinations he has missed.

A boy of about 14 seems depressed, although this has not previously been diagnosed. The only male adults he has to model himself on are dependent on drugs and alcohol. He frequently plays truant from school. He is on a slippery slope, and much needs to be done if he is not to slide into disaster.

There is so much promise for these Indigenous children, but it will only be fulfilled if their living conditions are fundamentally changed.

Health crisis in a land of plenty

It is remarkable to contemplate that in parts of Australia, there is a health crisis that is in some respects more devastating than anywhere else in the world. The Australian Medical Association has called the state of health and lack of health services endured by Aboriginal peoples and Torres Strait Islanders a national tragedy and a national shame. The former president of the association, Dr Mukesh Haikerwal, wrote earlier this year: “I think we are being kind in that assessment.”1 The figures for renal and coronary heart disease among Indigenous peoples could well be the worst in the world. For instance, Indigenous Australians are three times more likely to have a major coronary event than other Australians, and 1.5 times more likely to die after such an event.1

Through my two decades of involvement with the health of Aboriginal communities, I have watched in frustration as health levels improved only marginally and self-esteem and pride were destroyed. When the “sit-down money” arrived each fortnight, in the form of numerous government handouts, many communities went into self-destructive alcohol binges for 3 or 4 days, during which time women and children were abused, children did not go to school and remained hungry. Those of us working in the field of Indigenous health have watched this happening and have tried to influence the outcome, but despite this, both the health of Indigenous peoples and the level of their education have continued to show great disparity with the rest of the population.

We all know that social factors such as overcrowded housing, lack of education and limited employment opportunities, along with environmental health issues such as lack of clean water, washing facilities and functioning septic systems, all influence health outcomes of individuals and the community. These factors, combined with a cycle of welfare dependency, lead to a loss of pride and low self-esteem. Substance (particularly alcohol) misuse is a direct result. Therefore, any targeted medical strategy must have a broad focus and address all these wider issues which have an impact on the health of individuals.

Some good things have been done, but not on a scale to make a real difference — until now.

The Australian Government’s Northern Territory Emergency Response2 is without precedent in Australia. It is the largest and most significant whole-of-government initiative yet carried out in this country. The government set up the Northern Territory Emergency Response Taskforce (Box) to provide advice and to oversee the implementation of the emergency measures.

The intervention has three broad objectives:

The government committed $587 million for the stabilisation phase in the 2007–08 financial year. This is for urgent and immediate actions. It includes over $83 million specifically for improving child and family health, with $205.8 million for employment and welfare reform and the balance for promoting law and order, enhancing education, supporting families and for housing and land reform.2

On 18 September 2007, the government announced further funding of $740 million to highlight its long-term commitment, bringing the total committed so far to $1.3 billion. This includes $100 million over 2 years from the 2008–09 financial year for more doctors, nurses, allied health professionals and specialist services.2

When the response was announced on 21 June 2007, many were concerned about its motivation and methods.3 Was this not paternalism or yet another attempt to dominate Indigenous communities? Well, while it is still early days in an intervention to which the Australian Government has committed itself for at least 5 years, I have seen how this response is already bearing fruit and believe everyone with concern for Indigenous health should continue to support this initiative. We cannot let this opportunity go.

For instance, the introduction of strict controls over alcohol consumption had a huge impact almost immediately. An Indigenous woman told me that, for the first time she could remember, she had had a week of sleeping peacefully. A sharp reduction in the physical abuse of women and children has also been seen. The Chair of the Northern Territory Emergency Response Taskforce, Dr Sue Gordon (Box), reports that in communities across the NT, women are talking about the positive effects of alcohol bans in reducing violence, abuse and antisocial behaviour. The same thing is probably happening with levels of child sexual abuse — the horror which sparked off this emergency response — although it will only be when more trust has been built up that we will be able to explore this more fully.

A comprehensive program of health checks

One of the pillars of the initial phase of the Northern Territory Emergency Response from a health point of view is the health checks to be carried out on up to 17 000 children aged 15 years and under in 73 target communities. By 19 October 2007, medical teams had already completed checks on more than 3200 children. 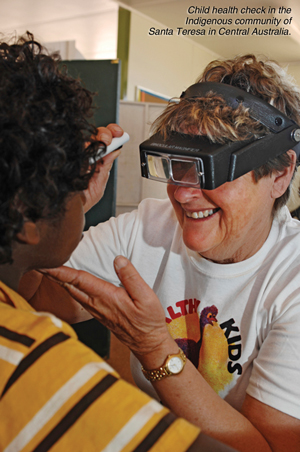 The findings of these checks are sobering, and underline the need for the intervention. We already knew that the children in many of these communities had very high rates of chronic diseases, but have found that the situation is even worse than the official picture. The Indigenous population has a burden of disease up to six times higher than in the non-Indigenous population.4

Probably 80% of the Indigenous children have middle-ear diseases. Intestinal parasites and skin infections are rife. An absence of water for washing — taps don’t run, toilets don’t flush, there is no soap — has led to skin hygiene so poor that pathogens thrive. This in turn contributes to the devastating levels of renal disease and heart disease, the latter particularly associated with rheumatic fever. Type 2 diabetes is also increasingly common in children.5

Of course, painting a full picture of the burden of disease is only the start. It must lead to a massive increase in treatment resources, and, beyond that, to a transformation of these communities. Only the synchronous rollout of many measures will be truly effective. This will take a lot of time and a lot of money. Fortunately, the government is committed to this initiative for at least 5 years.

Strategies in the stabilisation and normalisation phases of the initiative include:

A well resourced primary health care system — enough doctors, health workers and nurses — is integral to long-term sustainability. Further, interventions to manage the diseases identified by both the child health checks and data from the Northern Territory Government will need to be implemented. Talks have already started about this. I would like to think that extensive treatment programs will be underway within a year to deal with the ear, dental, cardiac and renal problems.

Along with educating children and parents about the importance of personal hygiene, we need to make this feasible. Installing taps that work will make a huge difference. 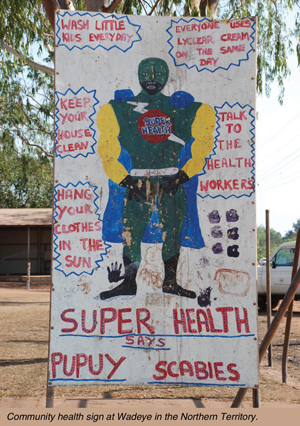 However, a sustainable solution will require much more than this, and the key will be education. That is the only way out of poverty, and away from the debilitating system of government handouts. Pride has to be restored to shattered communities.

This intervention is not going to be perfect; there will be many problems to overcome, but it gives us a tremendous opportunity. Of course, some people, particularly those with vested interests (like those making money out of selling alcohol), will feel threatened. Others will claim the response is paternalistic. To them, I have two things to say. First, in many of these communities, there is a complete breakdown of normal mores. It is not paternalistic to be firm about what is not acceptable. Second, the ultimate aim is to restore these communities, their resources and self-esteem to the point where they are in charge of their own destinies.

I believe this initiative offers a real chance to restore the health not just of the rural and remote Indigenous communities of the NT, but of Australian society, wounded by these enormous disparities. It is up to us to seize this one-time opportunity to finally solve a problem that has been decades in the making. We dare not let the momentum be lost.

The Taskforce was established to advise the Australian Government on how best to protect Indigenous children in the Northern Territory, oversee the Northern Territory Emergency Response Taskforce Operational Group, and promote public understanding of the issues involved. It is made up of people with experience in areas such as medicine, government, the law, education and business. Its members are:

I acknowledge the child health care teams for giving their time and skills to support this initiative. Recognition must also be given to the work of the doctors, nurses and Aboriginal health workers who live and work in the remote areas of the Northern Territory and remain committed to the health of both the Indigenous and non-Indigenous inhabitants. It is important to engage these health professionals in building long-term sustainability for the region.