A severe storm that began on Thursday, 7 June 2007 brought heavy rains and gale-force winds to Newcastle, Gosford, Wyong, Sydney, and the Hunter Valley region of New South Wales. The storm caused several deaths, including those of a family of four and their nephew, who died when a section of the Old Pacific Highway collapsed, and a couple who died when their car was swept off a bridge.

Rainfall of up to 275 mm in 24 hours and wind gusts exceeding 130 km/hour1,2 caused widespread flooding and damage to houses, businesses, schools, hospitals, nursing homes and community health centres. Local infrastructure was severely affected, with interruptions to power, water and gas supplies, sewerage system failures and rail line damage. Many roads were impassable because of flood water, fallen trees, fallen powerlines and abandoned cars. The Pasha Bulker, a bulk coal carrier with 780 tonnes of oil and fuel on board, was grounded on Nobby’s Beach, Newcastle, on 8 June.3

The NSW State Emergency Service responded to almost 20 000 storm-related calls, including requests for assistance with fallen trees, damaged houses and leaking roofs.4 Flood water resulted in thousands of evacuations, including about 6000 residents of Maitland and Lorn when the Hunter River threatened to breach its levee. A natural disaster was declared in 19 local government areas (Box 1).4 The region was affected by two more severe weather events in the following 2 weeks, which caused further flooding and property damage. The total damage bill is expected to reach $1.5 billion.5

The storm caused deaths, flooding, evacuations and infrastructure damage, but also had immediate effects on clinical service provision and presented a major threat to public health.

The storm led to demands on clinical services that were already stretched by the usual winter increase in activity. Between 8 and 13 June, 180 presentations to emergency departments of the Hunter New England Area Health Service were directly storm-related. They included presentations for hypothermia (34); fractures, injuries and lacerations (31); dyspnoea (18); and joint and limb pain (10). Eight presentations (4.4%) were assigned triage category 2, 25 (13.9%) were assigned triage category 3, and 38 (21%) resulted in hospital admission. In addition, 62 people were assessed by medical teams at the evacuation centre in Merewether RSL and Citizens Club in Newcastle over the weekend of the storm.

Hunter New England Area hospitals admitted 29 highly dependent people whose therapy was interrupted by the storm (eg, patients dependent on oxygen and dialysis and those receiving enteral feeds and intravenous therapy at home). Another 56 people from three health care facilities affected by flooding were relocated to other hospitals. Buildings, infrastructure and vehicles belonging to health facilities were damaged, further increasing the pressure on services, while some health staff were unable to attend work because their homes were flooded or isolated, roads were closed or cars were damaged, or because of carer responsibilities. In addition, 12 hospitals and 50 private nursing homes, hostels and retirement villages in the region experienced electricity interruptions and depended on on-site electricity generation.

Over 200 000 homes and businesses were affected by storm-related electricity interruptions, which caused failure of household winter heating and hot water, difficulty preparing hot food, and food spoilage.6 Some properties had no electricity for more than a week. The scale of the public health threat was immediately apparent: 207 private or commercial drinking water supplies, 1200 food premises, 2600 waste water disposal systems (septic tanks) and three public swimming pools were affected by flooding or power outage in the Hunter New England Area.

The loss of electricity in parts of the greater Newcastle and Lake Macquarie region affected water and sewerage services because electric pumps failed. Restoring a safe water supply to households was made the highest priority. Affected water reservoirs were filled by rerouting water reticulation until electricity was restored or temporary portable generators could be deployed. Two small water utilities in the Hunter Valley were also affected, and they introduced water restrictions to conserve safe stored water. One council utility had no option but to draw water from the Hunter River, resulting in high turbidity. It issued precautionary advice to consumers to boil water until treated water met Australian Drinking Water Guidelines requirements.8

Sixty sewerage pumps in the region failed, which caused back-up and overflow of sewer mains and sewage contamination of flood water. Limiting public exposure to this water was emphasised as a key message, and all sports events that involved contact with potentially contaminated sports grounds were postponed as a result of public health advice.

The public health emergency operations centre coordinated daily briefings with water utilities for 4 weeks after the storm, focusing on water quality and quantity, protection of water supplies, results of intensified microbiological monitoring, sewage overflows, and complaints from the public. No microbiological water quality failures were detected.

Early on Saturday, 9 June, it became evident that, although the Newcastle and Lake Macquarie region had borne the brunt of the initial wind and storm damage, other local government areas would be affected by flooding, particularly those near the Hunter River and its tributaries. The public health emergency operations centre established regular formal liaison with local government public health coordinators (usually environmental health officers) to raise awareness of potential public health risks, coordinate the available resources and conduct ongoing risk assessments in the field. 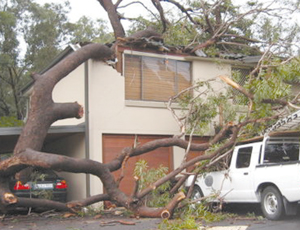 The evacuation centres for displaced residents were inspected to ensure that they met appropriate standards of sanitation and hygiene, water quality, food safety, and accommodation. Environmental health assessments were provided to schools affected by the storm, on request from the NSW Department of Education. The public health emergency operations centre advised on how to minimise potential harms to human and environmental health from the grounding of the Pasha Bulker. The Pasha Bulker was refloated on 2 July without a major oil spill.

Communication with the public

Disaster recovery centres were established in Newcastle, Cessnock, Maitland and Singleton to coordinate information and assistance to the public from all the emergency service agencies.

A 24-hour health hotline was established and widely publicised on 9 June to respond to community concerns. Health professionals were trained to triage calls, to advise on public health and other general storm-related issues, to refer concerns to relevant health experts as required, and to direct callers needing more detailed advice to appropriate websites or other agencies’ numbers. The hotline was also used to gauge community concerns, which together with risk assessments, were used to develop several fact sheets providing public health advice.

The public health emergency operations centre rapidly implemented an Area-wide surveillance system for storm-related emergency department presentations, including those for gastroenteritis, injuries, and mental health and other problems, and also instituted active surveillance of sentinel community pharmacies (for their general activity levels, injuries, and gastrointestinal and respiratory symptoms). Local general practitioners were requested to notify the public health unit of gastroenteritis presentations, and to report whether their practices had been affected by vaccine cold-chain interruptions. Over 10 000 vaccine doses were replaced in 45 general practices. Routine data collected through the notifiable diseases and OzFoodNet (food-borne illness surveillance system) databases were regularly reviewed.

The reception desk at the Hunter New England Population Health Unit handled over 200 phone calls, and the health hotline received over 100 storm-related enquiries in the first week after the storm. The call content was logged and used as an additional surveillance tool.

Within a fortnight of the storm, Hunter New England Population Health conducted a survey of 215 randomly selected households from two of the worst affected local government areas: Newcastle and Lake Macquarie. This survey examined preparedness and access to information in order to learn from the disaster and improve the response to future disasters. The survey found that the local ABC (Australian Broadcasting Corporation) radio station (1233 ABC Newcastle) had played an important role in providing public information during the storm. The survey also found that around half of households were unaware of storm warnings on 7 June. Deficiencies in disaster preparedness were also identified: some households lacked recommended basic equipment, such as battery operated radios, appropriate batteries, first-aid kits and emergency contact lists.9

Since the storm, NSW Health has made a formal proposal to the State Emergency Management Committee for the development of a memorandum of understanding between the NSW State Emergency Service organisations and the NSW ABC to facilitate communication with the public during disasters. Such arrangements already exist in Victoria, South Australia and Western Australia.10

The June 2007 long-weekend storm rapidly developed into a widespread natural disaster that challenged clinical service provision and posed major public health threats. The public health response was extensive and, surveillance indicates, successful, but was greatly assisted by the efforts of the local ABC radio station, which provided continuous coverage of the storm and frequent public health messages. Given our experience, all states and territories would benefit from formal arrangements with the ABC for provision of emergency health information during a disaster. 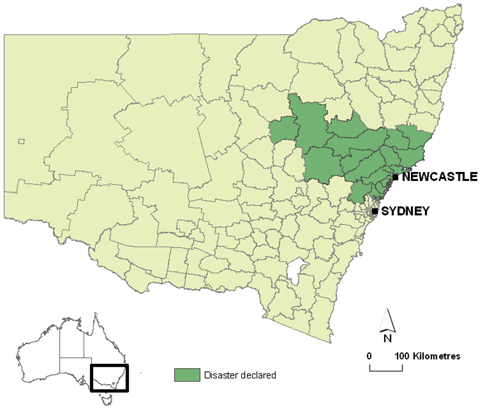