A 45-year-old woman was referred to the Victorian Liver Transplant Unit with acute liver failure following the use of paracetamol at a therapeutic dose during prolonged fasting.

Eight weeks previously, the patient had undergone total abdominal hysterectomy for symptomatic uterine fibroids. Seven weeks after surgery, she was readmitted to hospital with subacute bowel obstruction secondary to adhesions. She had lost 10 kg in weight since the surgery, which was attributed to poor food intake as a result of recurrent abdominal pain and intermittent vomiting. Conservative treatment failed, and the patient subsequently underwent laparoscopic division of adhesions on the fifth day after admission. She had remained nil-by-mouth throughout this period. From the time of admission, and for the following 8 days, the patient was prescribed paracetamol 1 g “QID strict” for her abdominal pain (total cumulative dose, 32 g).

Four days after surgery (ninth day after admission), the patient developed haematuria and was noted to be displaying odd behaviour. The following morning, she became increasingly confused and drowsy. She was admitted to the intensive care unit, where her conscious state deteriorated rapidly and she required intubation. She was found to have acute hepatic failure, renal failure, and profound metabolic acidosis (Table). Paracetamol levels were in the toxic range (238 μmol/L; therapeutic range, 66–132 μmol/L). The patient was commenced on an N-acetylcysteine intravenous infusion and transferred to the Victorian Liver Transplant Unit for consideration for urgent liver transplantation.

The patient was subsequently listed for liver transplantation, but died before a suitable donor became available. Postmortem examination confirmed that the cause of death was multisystem organ failure secondary to acute liver failure associated with paracetamol toxicity. The liver weighed 0.786 kg (normal weight in women, 1.2–1.4 kg), and the capsule appeared wrinkled. Histological assessment of the liver revealed a pattern of massive panlobular necrosis, with some mild fatty changes associated with preserved hepatocytes adjacent to portal tracts. The sinusoids contained increased numbers of inflammatory cells (Box 1).

Paracetamol toxicity is the most common cause of acute liver failure in Australia.3 A recent study of 662 patients from 22 tertiary care centres in the United States found that 48% of patients presenting with severe paracetamol hepatotoxicity had not intended to poison themselves, and took the drug for therapeutic purposes only. These patients tended to be older than patients who intentionally poison themselves.4 Paracetamol hepatotoxicity in those older than 40 years is associated with an increased risk of fulminant hepatic failure, death or liver transplantation.4,5 An analysis of 67 cases of “therapeutic misadventure” with paracetamol found that 60% of patients with accidental paracetamol poisoning had taken no more than 6 g paracetamol per day, and 40% had not exceeded the recommended maximum dose of 4 g per day.6 Risk factors for developing hepatic toxicity under these circumstances include prolonged fasting,7 regular excessive alcohol intake,6 or concurrent use of drugs that induce cytochrome P450 (CYP450), especially CYP450 2E1. Elderly patients with renal and cardiopulmonary insufficiency may also be at increased risk.8 Interestingly, there is little evidence that pre-existing liver disease increases the risk.1

The link between fasting or CYP450 induction and increased susceptibility to paracetamol toxicity can be readily explained by reviewing the metabolism of this drug. When paracetamol is taken in standard doses in healthy individuals, more than 90% is conjugated to form inactive metabolites, which are then excreted in the urine. A small proportion of the paracetamol is metabolised by the CYP450 system to N-acetyl-p-benzoquinone imine (NAPQI), which, if allowed to accumulate, is toxic to the liver. Normally, NAPQI is conjugated with glutathione and the harmless products excreted in the urine (Box 2). Prolonged starvation can severely deplete the cosubstrates required for paracetamol conjugation and reduce glutathione stores, so that even therapeutic doses of the drug can result in the accumulation of toxic amounts of NAPQI (Box 2). Regular and prolonged treatment with paracetamol may be particularly dangerous in fasting patients, as ongoing metabolism of the drug leads to further consumption of already depleted glutathione stores. Alcohol and other drugs capable of inducing CYP450 predispose patients to paracetamol toxicity by increasing the production of NAPQI. In addition, chronic alcohol misuse leads to depletion of glutathione.

Between 1989 and 2004, 42 patients were referred to the Victorian Liver Transplant Unit with paracetamol-induced acute liver failure.9 In 11 of these (26%), the poisoning was clearly accidental. Eight patients recovered spontaneously, one survived after undergoing liver transplantation, and two died — including the patient described in this report. Thus, in Australia, severe life-threatening liver injury from accidental paracetamol poisoning appears to be quite uncommon. Nevertheless, this is a readily preventable syndrome of which both patients and the medical profession should be made more aware. In particular, clinicians should be cautious about prescribing regular doses of paracetamol for pain control in malnourished or fasting patients, and need to appropriately counsel patients who are regular users of the drug.

Although many cases of accidental paracetamol poisoning at therapeutic dosage have been described, controversy surrounds the actual incidence and mechanism. Unfortunately, as with our patient, it is impossible to determine whether larger quantities of paracetamol had been ingested either accidentally or intentionally.2,10

1 Photomicrograph of the liver at autopsy 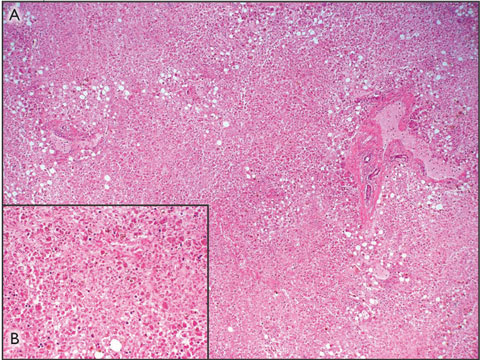