Cyril Charles Julius Minty was born on 26 June 1922 in Tonga, the only son of Dr C C Minty, a medical practitioner whose accomplishments included assisting at an operation on Queen Salote. The Minty family returned to Australia when Cyril was 2 years old. 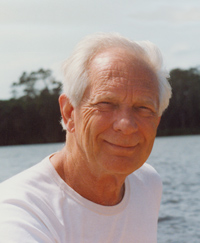 Educated in Brisbane, Cyril graduated in medicine from the University of Queensland in 1945. After working briefly at Rockhampton General Hospital, he became interested in cancer research, working first at the Queensland Radium Institute from 1948 to 1954 and then at the Peter MacCallum Cancer Institute in Melbourne from 1955 to 1987, where he became a Member and subsequently Fellow of what is now the Royal Australian and New Zealand College of Radiologists. In 1963, he gained Fellowship of the Royal College of Radiologists of London.

Virtually all of Cyril’s professional life was spent at the Peter MacCallum Cancer Institute, where he rose to a consultant position in the 1960s. With his Queensland experience of sunlight-induced malignancy, he specialised in radiotherapy of skin cancer. But it is for his skill and compassion with children that he will be remembered by many patients. The gloomy prognosis of paediatric malignancy improved dramatically with the advent of chemotherapy, and its combination with radiotherapy, at the Royal Children’s Hospital in Melbourne. In collaboration with Dr J T Andrews, Cyril published research on the radiotherapy of keloids, keratoacanth-oma and the management of thyroid cancer.

In his leisure time, Cyril was a keen and skilful chess player. He was less proficient at golf, although he loved playing it. His later years were marred by episodes of ill health, including strokes and a fractured hip. These did not, however, prevent him enjoying the garden and birds of his rural retreat in Monbulk, in Victoria’s Dandenong Ranges, where he and his wife Alison entertained extensively.

Cyril died on 25 August 2006 from the late effects of his strokes, including dementia. He is survived by Alison, and his children, David, Margaret and Nerida, from his first marriage to Moira. Sue, his second wife, died in 1987.