An outbreak of pulmonary tuberculosis in young Australians

Objective: To characterise a pulmonary tuberculosis (TB) cluster in the Hunter Area of New South Wales using a combination of traditional epidemiological methods and molecular typing.

Design, setting and participants: Review of all notifications of TB in the Hunter Area between January 1994 and June 2005, with a detailed analysis of cases among people born in Australia or New Zealand.

Results: Over the period studied, there were 72 TB notifications among people born in Australia or New Zealand. Genotypic testing was available for 20 of these cases, of which nine were confirmed to be part of a cluster. Two further cases for which genotyping was not available were epidemiologically linked to the cluster and regarded as probable cluster cases. Members of the cluster were relatively young (median age at diagnosis, 35 years; range, 21–57 years), and eight were women. Over the same period, there were 83 TB notifications among people born overseas, the majority being from Asia (47%) or central and eastern Europe (24%) (median age, 54 years; range, 9–63 years).

Conclusion: Clinicians should maintain a high index of suspicion for pulmonary TB in a person presenting with a productive cough lasting more than 3 weeks, weight loss, haemoptysis, night sweats and chest pain, even if the person is not overseas-born or elderly. A comprehensive tuberculosis genotyping network at regional and national level in Australia could help identify clusters resulting from recent transmission.

* The Hunter Area was incorporated into the Hunter New England Area Health Service in 2005.

The Hunter Area* of New South Wales has had a low and stable number of Mycobacterium tuberculosis (MTB) notifications. Between 1994 and 2005 there were an average of 12 MTB notifications a year (range, 8–16), a rate of less than 5 per 100 000. The median age of infected patients was 55 years, with the majority (54%) born overseas in countries with high rates of endemic tuberculosis (TB). Infections in patients born in such countries are presumed to result from reactivation of infection acquired in their country of origin.

A cluster was first suspected in February 2005, when contact-tracing interviews with an inpatient with pulmonary TB (Case 6 in Box 1) identified a link to an informal music recording studio shared with five other local TB cases whose onset of illness dated back to as early as 1994. The members of this group were younger than typical notified cases and were all born in Australia or New Zealand. We conducted an investigation to determine the extent of the cluster, to identify epidemiological links and risk factors, and to ensure an appropriate public health response.

All notifications for TB in the Hunter Area between January 1994 and June 2005 were reviewed, and genotyping was requested for all available isolates from people who were born in Australia or New Zealand. All genotyping data for NSW cases were examined. For each case suspected of being part of a cluster, contact-tracing records were reviewed and the person was re-interviewed where traceable. We conducted home visits if attempts at phone contact were unsuccessful. Additional contacts were sought, and efforts were made to follow up individuals if previous contact tracing was considered incomplete.

Exposure to potential sources of TB, including visits to music recording and live-music venues, was explored in detail with suspected cluster cases. A number consented to have their names released directly to other cases to facilitate identification of possible transmission links. In an effort to actively detect additional cluster cases, we alerted clinicians in Newcastle to consider TB in young people presenting with TB symptoms.

Cluster cases were confirmed if the isolate genotype was indistinguishable by MIRU, spoligotyping and IS6110 RFLP analysis. Cases missing only the RFLP analysis, or with an RFLP pattern that differed by only one band, were included if an epidemiological link was confirmed. An epidemiological link to a confirmed cluster case required a reported contact while the case was infectious, taking account of the date treatment commenced.

Between January 1994 and June 2005, there were 72 TB notifications among Australian- and New Zealand-born people in the Hunter Area. Genotyping was available on 20 of these and on an additional cluster case diagnosed in December 2005 after the investigation had commenced.

Genotyping helped to confirm nine cluster cases. All were of the same MIRU profile (223125143312), and spoligotyping showed them to be from the T1 (Haarlem) family of MTB (SpolDB3 classification, probability of 0.99). The RFLP pattern was indistinguishable for seven cases, had one additional band for Case 8, and was not available for Case 5, as insufficient DNA could be recovered from the culture, which had been stored since 2002 (Box 2). All cluster isolates were fully sensitive to first-line antituberculosis therapy.

Twelve other isolates from the Hunter Area had genotypic patterns distinct from those of the cluster and no epidemiological links to cluster cases.

Genotypic testing was not available for the remaining 52 cases, 45 of whom were diagnosed clinically and had no isolate for testing. Genotyping was not attempted on seven isolates collected prior to 1999. Epidemiological links to cluster cases were identified for two of this group, who were therefore considered probable cluster cases.

Two cases living elsewhere in NSW had a similar genotype to the cluster cases, differing only in having one band less than the cluster strain on RFLP analysis. As no epi-demiological links were identified between these two and any of the Hunter Area cases, they were assessed as unlikely to be part of the cluster.

There were thus nine confirmed and two probable cluster cases among people born in Australia or New Zealand. The median age at diagnosis was 35 years (range, 21–57 years), and eight of the 11 cases were women.

None of the first eight cases had previously been identified as contacts of earlier notified cases. Cases 9, 10 and 11 were known contacts, and Case 10 had been treated for latent TB but was poorly compliant.

Seven of the cluster cases were successfully contacted for a detailed interview by a TB nurse with over 10 years of contact-tracing experience. Cases 1, 3 and 5 could not be located and Case 2 declined an interview. No new contacts were identified as a result of the interviews, but four individuals who had originally been identified as contacts participated in further screening. No further TB cases were detected. Review of the medical history of Case 1 revealed that he had been treated for TB 20 years earlier, but it was not possible to determine whether the 1994 episode was a reactivation or a new infection.

Early cluster cases had not reported links to a music recording studio and later cases suggested that this information had been deliberately withheld, perhaps because of the unofficial nature of the business and associated drug use. Contact with the studio was subsequently identified for seven cluster cases. (A number of cluster cases had also been casually employed as band members performing at local hotels.) The studio began as a double garage with small rooms, no external windows and poor ventilation, and kept no records of attendance. It closed in 2000, and a studio with the same name that started in another location soon afterwards was closed in 2003. Both studios were small “backstreet” businesses. Unfortunately, as both premises were no longer in operation at the time of our study, we could not inspect them.

Marijuana use was identified among six of the nine confirmed cases and both of the suspected cluster cases, but detailed information was difficult to obtain, and use of shared smoking equipment was not explored.

A further 83 TB notifications were received during the period January 1994–June 2005 for people born in countries other than Australia or New Zealand. The majority were from Asia (47%) and central and eastern Europe (24%), with a median age of 54 years (range, 9–63 years).

We have identified a cluster of pulmonary TB acquired by relatively young Australian- and New Zealand-born individuals in the Hunter Area. The index case, diagnosed in 1994, was followed by eight confirmed and two suspected cluster cases that were diagnosed between 1999 and 2005. It is possible that additional cluster cases may be identified in the future.

Clinicians should maintain a high index of suspicion for pulmonary TB in a person presenting with a productive cough lasting more than 3 weeks, weight loss, haemoptysis, night sweats and chest pain, even if the suspected case is atypical (ie, not overseas-born or elderly). This is particularly important if the individual comes from a vulnerable population subgroup.6

In the cluster we examined, epidemiological investigation revealed complex social networks between cases, with a likelihood of several “waves” of transmission between 1994 and 2005. Transmission probably occurred at a small, poorly ventilated recording studio and in social and workplace settings. Although the contribution of recreational marijuana use to the spread of TB is not clear in this cluster, shared smoking equipment has been identified as a potential source of infection in previous clusters.7

Genotyping played a pivotal role in our investigation, and the use of multiple typing methods improved cluster discrimination.8 Confirmed cluster cases were from the relatively uncommon T1 family, identified in fewer than 5% of NSW isolates, increasing the likelihood that the cases were related. Genotyping resulted in the identification of additional cluster cases and the timely exclusion of several young Australian-born cases, thus allowing investigators to focus their resources on identifying epidemiological links between cluster cases. Two cases with isolates whose genotypes were very similar to the cluster strain (with a single band difference in the RFLP pattern) were excluded because no epidemiological links could be identified. However, the possibility that they were linked indirectly to the cluster by currently unidentified cases cannot be excluded.

Routine genotyping has the potential to detect unsuspected clusters, and would likely have identified this group earlier if testing had been available before 2003. The delay in identifying the cluster reinforces the limitations of relying solely on traditional contact tracing, particularly in hard-to-reach populations.9 Molecular epidemiological studies have demonstrated that as few as 5%–10% of clustered cases are identified through routine investigation of close contacts.2,10,11 Factors contributing to this low success rate include the importance of casual contact in transmission and the fact that cases do not necessarily disclose all contacts.

In low-incidence countries such as Australia, secondary TB transmission should ideally be limited by rapid and complete contact investigation. In practice, however, such action is hampered by diagnostic delays and the occurrence of cases in hard-to-reach itinerant groups, in which transmission often occurs beyond recognised “concentric circles” of close contacts.12 A finding of genotypic clustering of MTB isolates could be used as a trigger for a second targeted interview designed to unravel undetected routes of transmission. Such a two-stage contact investigation would add “epidemiologic value”.2,10,13

A comprehensive tuberculosis genotyping network at regional and national level in Australia could help to identify and investigate clusters resulting from recent transmission. As real-time, amplification-based genotyping becomes available, people with TB who need a second interview will be rapidly identifiable, facilitating a more efficient and effective public health response.

1 Epidemiological links for a cluster of tuberculosis cases in the Hunter Area, 1994–2005* 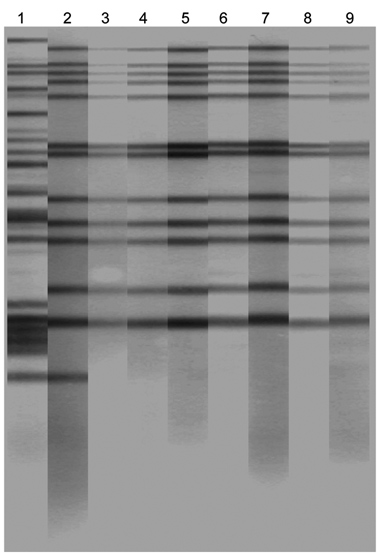 Genotyping of MTB isolates was funded by the NSW Department of Health. Infrastructure support to Hunter Area staff was provided by the Hunter Medical Research Institute.