The difficulty with data: greater accuracy required for policy making

To the Editor: Women of the remote Indian Ocean Territories (Christmas Island and the Cocos Islands [see map]) regularly question why their comprehensive obstetric service, allowing deliveries on the Islands, ceased in 1998. A study in 20051 aimed to provide answers for these women. 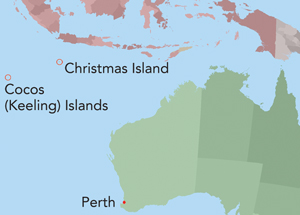 There is one general practitioner on the Cocos Islands and two on Christmas Island. Previously, procedural GPs attended to most deliveries. Now, pregnant women must leave the Islands 4 weeks before their expected delivery. The financial, physical, emotional, and cultural costs of this are substantial.

Reports published in 20022 and 20043 identified community concerns, but resisted recommendations to resume on-Island birthing, because of perceived low birth numbers and difficulty sustaining the skills of clinicians. Both studies relied on external birthing data, as the Indian Ocean Territories Health Service (IOTHS; administered by the Department of Transport and Regional Services) had not documented numbers of deliveries.

The Alberton Report,3 extrapolating from Australian Bureau of Statistics (ABS) data, assumed that the population of children aged less than 1 year in a census year equalled the number of deliveries the year before. The ABS has a system to protect the confidentiality of small isolated populations and purposely does not report these numbers.

The Bath Report2 relied on data from the Western Australian Midwife Notification System (MNS). The MNS reported 136 births to Island women from 1995 to 2004, while our study (Western Australian Centre for Remote and Rural Medicine)1 recorded 326 births. Thus, the MNS attributed only 41% of known births to Island women during 1995–2004, and only 23% during the period considered by the Bath Report.

We believe that the MNS data shortfall occurred for two reasons. Firstly, women frequently provide their temporary mainland address on the MNS form for practical reasons. Secondly, one in seven women leaving the Islands to deliver their babies choose to give birth in a state other than Western Australia to be closer to family, and these births are not attributed to women from the Islands.

The methods used by the Alberton Report, the MNS and the Bath Report result in underestimations of the number of confinements for Island women by up to 77%.

It is regrettable that this situation has not been previously recognised or acknowledged, and that recommendations for the resumption of obstetric services by the IOTHS have repeatedly been based on incomplete data. If records of the numbers of births for Island women had been collected and considered by the IOTHS, Island families might again enjoy a comprehensive on-Island delivery service for low-risk pregnancies.

Susan Downes was paid a modest honorarium by the Department of Transport and Regional Services to assist her in undertaking a research study, of which this was one aspect.