A 6-month-old infant presented with eczema in January 2006 and was initially treated with antiseptic bath oil, emollients and topical corticosteroid ointments.

The infant presented again 3 weeks later with a 7–10-day history of groin and axillary desquamation. Brown hyperpigmentation and superficial brown desquamation were notable around the nappy area. Erythematous areas were noted in the skin folds (Figure A).

Cessation of the antiseptic bath oil was recommended. The patient continued to use corticosteroid ointments, plain emollient bath oil, and 50% white soft paraffin with 50% liquid paraffin. Use of the emollient cream was later recommenced without problems.

A 7-year-old girl with moderate eczema developed a flare around her neck in February 2006. She had previously been educated on the use of bath oil in wet wraps and cool compresses for treating flares, and had started using the same antiseptic bath oil as Patient 1 (at the concentration recommended by the manufacturer for use as a rinse) in cool compresses. Eleven days after starting use of the cool compresses, she presented with a painful, weeping raw neck, upper chest (Figure B), back, and cubital fossae, requiring opioid analgesia and admission to hospital.

Her reddened weepy areas settled with cessation of the antiseptic bath oil, and use of plain bath oil, topical corticosteroid ointment, oral corticosteroid, and regular moisturising with 50% liquid paraffin and 50% white soft paraffin.

A 14-year-old girl with previously mild eczema presented in November 2006 with a flare affecting her cubital fossae. She was advised to use an antiseptic bath oil (containing 6% benzalkonium chloride, 2% triclosan, and 52.5% light liquid paraffin), emollients and potent topical corticosteroid ointment, and was given advice on using wet wraps to settle the affected areas.

Over a 10-day period, the patient’s eczema settled. She then acutely developed large bullae bilaterally in the cubital fossae, in a sharp “cut-off” distribution (Figure C). She could not fully extend her elbows due to the pain, and was admitted to hospital. Acute contact dermatitis was diagnosed, and use of the antiseptic bath oil was ceased. Her symptoms settled with the use of oral corticosteroid, frequent moisturising with 50% liquid paraffin and 50% white soft paraffin, and potent topical corticosteroid ointment. 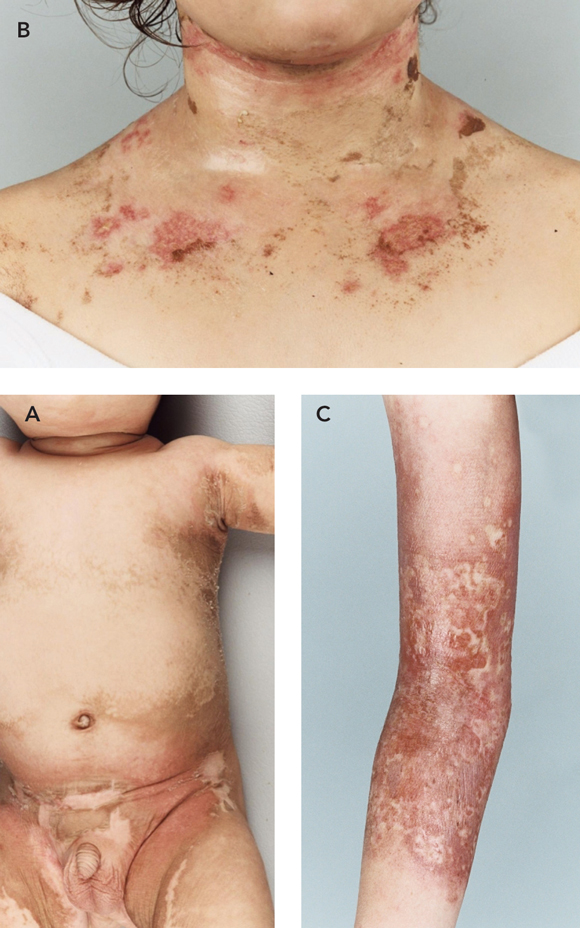 Photographs of each patient at time of discharge, clockwise from below left:

A: Patient 1 — a 6-month-old infant with contact dermatitis from frequent bathing with antiseptic bath oil.

B: Patient 2 — a 7-year-old girl with contact dermatitis on her neck from using antiseptic bath oil in cool compresses.

C: Patient 3 — a 14-year-old girl with contact dermatitis on the cubital fossa from using antiseptic bath oil in wet wraps.

Ingredients in the two antiseptic bath oils used by these patients include benzalkonium chloride (6%), triclosan (2%), and paraffin. Direct contact with triclosan in formulated products has only rarely been associated with skin irritation or sensitisation in humans.1 Allergic contact dermatitis to benzalkonium chloride is also rare.2 Benzalkonium is a known strong cutaneous irritant and is reported to be corrosive to mucous membrane at a concentration of 10%.3

For Patient 1, the antiseptic bath oil was frequently being applied to his skin in the bathwater and not rinsed off. We believe that secondary occlusion to the groin (and axilla) by skin folds and the close fit of his nappy contributed to ongoing irritation. Prolonged contact with another bath oil with the same active ingredients in the same concentration has previously been reported to cause irritant dermatitis.3

It remains unclear whether the frequent application of cool compresses to the softer skin of the neck of Patient 2 resulted in irritant contact dermatitis, or whether true allergy developed. Similar eruptions have been described in reaction to standard concentrations of bath oil, as well as to concentrations greater than the manufacturer’s recommendations.3-6 However, the distribution in this case suggested irritant contact dermatitis.

The older child, Patient 3, stated that she had had marked initial improvement after starting use of the bath oil. Her mother thought that after this improvement there may have been a decrease in vigilance in measuring the concentration of the oil, as well as possible prolonged exposure time, which probably resulted in the subsequent acute burn seen in Figure C. A case has been previously described where an increased concentration of the same antiseptic bath oil caused subcorneal pustular dermatitis, with some features resembling a chemical burn, and restriction of movement.6

It is notable that, in all three cases, the thinner skin folds were preferentially affected. This has been previously described, when total body application of antiseptic bath oil to a 27-year-old man resulted in diffuse swelling of his penis and scrotum only.5

In view of the increasing frequency of use of these products, and the subsequent increase in incidence of contact dermatitis as a result (personal observation), we suggest that clinicians, nurses and pharmacists should be aware of the potential for this complication to occur. Using the appropriate concentration of antiseptic bath oils should be emphasised. We recommend that antiseptic bath oils be used only for rinse-off type applications, and, if used in the bath, we suggest rinsing after bathing. Furthermore, we strongly suggest that only plain bath oils should be used as part of a cool compress or wet wrap regimen.