A 10-week-old baby presented to a local general practitioner with a 2-day history of discharge from her left eye. This was accompanied by an upper respiratory tract infection. The baby was otherwise healthy, born at term, and had no history of trauma to the eye. Her brother had had conjunctivitis a week earlier, which resolved with chloramphenicol drops within a few days. The treating doctor made the diagnosis of bacterial conjunctivitis and prescribed chloramphenicol ointment to be used four times daily.

The discharge became more profuse and purulent, prompting a return to the GP 2 days later. At that consultation, the GP observed lid swelling, and treated a presumed lid infection by adding framycetin eye drops and oral amoxycillin. A further 2 days later, the baby returned with worsening of the lid swelling and green discharge covering the cornea. This prompted the GP to refer the baby to the local hospital, where a corneal abscess was diagnosed. A swab was taken for culture. The child was urgently referred to a paediatric tertiary referral hospital. At the tertiary hospital, the child was found to have copious purulent discharge from the left eye, mild lid swelling, severe conjunctival injection, and a dense opacity in the superior half of the left cornea. There was severe thinning and descemetocele formation over most of the inferior half of the cornea. A corneal scrape was sent for microbiology. A diagnosis of severe bacterial keratitis with impending perforation was made. Topical gentamicin 1.5% eye drops and vancomycin 5% eye drops were given every 30 minutes; and topical ceftazidime 5% was given every hour. Intravenous ceftazidime 50 mg/kg (235 mg) was commenced 6-hourly.

Six hours later, the globe had perforated, with widespread iris prolapse through the now necrotic cornea. Pseudomonas aeruginosa was cultured from the conjunctival specimen taken at the referring hospital. The eye was considered unsalvageable (Box 1), so after discussion with the parents, a decision was made to eviscerate the left eye. After evisceration of the ocular contents, the sclera was closed without an implant, and a conformer was placed in the conjunctival fornix. The eye tissue specimen also grew P. aeruginosa, which was sensitive to gentamicin, tobramycin, timentin, ceftazidime and ciprofloxacin. The child was discharged on the third post-operative day with oral ciprofloxacin 10 mg/kg twice a day and topical tobramycin drops 0.3% four times daily. Three months later, an acrylic ball was inserted into the eye cup to restore orbital volume.

Infectious conjunctivitis is the most common inflammatory eye condition, comprising 0.7% of all presentations to general practitioners in Australia.1 In contrast, infectious keratitis is rare, but is one of the most visually threatening ocular conditions. Infections initially manifesting as conjunctivitis can spread to involve the cornea. Pseudomonas is one pathogen known for this, as appears to have occurred in this patient. The symptoms of conjunctivitis include irritation, stinging and discharge, whereas severe foreign body sensation, pain, photophobia and blurred vision should raise suspicion of keratitis. Signs differentiating conjunctivitis from keratitis are listed in Box 2.

Examination findings are most important in young children, because they cannot describe the symptoms. However, examining the eyes of distressed babies and children can be extremely difficult. A few drops of local anaesthetic can make examination easier. Restraining a child or wrapping a baby in a sheet may be necessary. With a baby, a small lid speculum may be necessary to gain an adequate view, and magnification and a bright light source are essential. Progressive ulceration can lead to corneal perforation and endophthalmitis, as in the baby described in this report. Swabs should be considered when there is profuse discharge.

Risk factors for keratitis in children include trauma, pre-existing corneal disease, prior corneal surgery, contact lens wear and systemic illness.2,3 Endophthalmitis caused by P. aeruginosa has a particularly poor visual prognosis; a case series of 28 patients reported an evisceration or enucleation rate of 64% and a final visual acuity of 5/200 or better achieved in only 7% of patients.4 In a case series of neonates, septicaemia complicated more than half of all cases of Pseudomonas keratitis, and led to death in 40%.5

The differential diagnosis in our 10-week-old patient is similar to the differential diagnosis of ophthalmia neonatorum, which is defined as severe conjunctivitis arising within 1 month after birth.6 These infections, which include Chlamydia trachomatis and Neisseria gonorrhoea, can be acquired at time of delivery, or from the nasopharyngeal passage and from carers.6 Dacryocystitis can also cause marked lid swelling.

This case highlights the importance of considering alternative diagnoses to conjunctivitis, especially where a presumed conjunctivitis does not respond to initial treatment.

1 Keratitis, corneal necrosis and perforation of the globe 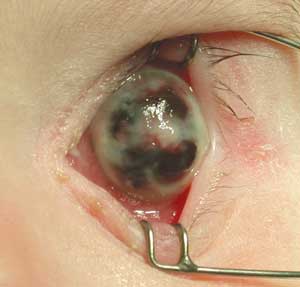