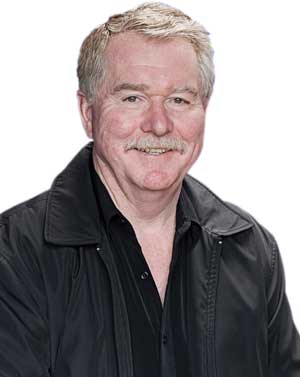 Two days before my 58th birthday, I was diagnosed with prostate cancer.

That day, in 2003, when my life suddenly changed in so many ways, is one I’ll never forget. I genuinely feel for doctors faced with the unenviable task of passing on such horrible news. There is no easy way of doing it, but I often wonder if they are aware of the emotional “fallout” when the patient leaves their rooms.

The urologist told me that six of the eight core biopsy samples were positive and that the cancer was a real “nasty”. With a Gleason score of 9 (indicating a very aggressive tumour), it could not be ignored. I don’t remember much else about our conversation, but I was given some literature to read and I do recall that we discussed treatment options. I left his rooms armed with requests for pathology and radiology tests.

I remember walking back to my car, calling my wife and then completely falling to pieces. My life simply collapsed in front of me. My wife hurried home from work and somehow I managed to drive home and wait for her there.

My decision about treatment needed to be based on a few facts: Gleason 9, a high prostate specific antigen (PSA) level of 10, and a greater than 80% coverage of the prostate capsule, with a strong possibility that the cancer had metastasised. After a lot of reading and discussion with the doctors, I decided on high dose rate (HDR) brachytherapy, in conjunction with external beam radiation and hormone treatment. At present, I am undergoing watchful waiting with biannual blood tests and I am very confident I have beaten this cancer.

A diagnosis of cancer raises many emotions. I recall the fear and terror when I was told of the diagnosis. I recall the horror of being told I would effectively be chemically castrated during the hormone treatment. I recall the embarrassment of being prepared for brachytherapy — as a man, I was not used to this sort of invasion of my body and perceived dignity.

I recall contemplating the possible outcomes — incontinence, osteoporosis, life on hormone treatment and, as is inevitable whenever the word cancer is mentioned, death.

I am blessed with a wonderful wife, and family and friends who shared many of my ups and downs as I underwent treatment and faced the uncertain outcomes, but, like many men in similar situations, I essentially carried all the fears and frustrations in my own head and naïvely thought I was in control. I battled on with this questionable strategy, as I tried to cope with the various aspects of my illness: Zoladex [AstraZeneca] (hormone) implants; preparing myself for brachytherapy; 5 weeks of external beam radiation; after-effects of the radiation treatment — burning and proctitis; initial incontinence and ongoing impotence; changes to my body — issues such as significant weight increases, breast enlargement, hot flushes, tiredness and, after brachytherapy, the changes to my anatomy.

From the moment of diagnosis, we patients enter a different world. We need to learn a new language — terms such as “watchful waiting”, “radical prostatectomy”, “HDR”, “brachytherapy” (I initially thought Brachy was a doctor who had developed the treatment), “Gleason scores”, “PSA”, and so on — all are so foreign. Thrust into this new world, I felt frightened and out of control, but I still told myself I had to cope on my own.

As the treatment took effect, I appeared to be doing very well. With the exception of impotence, everything was working fine. My PSA level was down and my testosterone level was returning naturally. But emotionally, I was still fearful and bewildered.

The impact on my daily life

By October 2004, some 16 months after diagnosis and 10 months after my radiation treatment had finished, it became clear that my business — a small affair comprising myself and three employees — was in trouble. As I became aware of my situation, the “demons” started to appear and by February/March 2005, they were appearing every night. Sleep was fitful and difficult. For the first time in my life, I did not want to go to work. I was worried about my staff and their ongoing security. I worried about my wife. I was unable to focus on anything relating to work, and fearful of the phone ringing.

By April, my business was failing badly. I was unable to maintain normal commitments, and the financial burden was too much. My moods and emotions were overwhelming and I began to seriously contemplate suicide. The pressures of business, the personal battle, the fears, the emotions, the weaknesses, or at least what I perceived as weaknesses, my pride — all imploded. The true impact of the past 2 years’ battle really hit me.

With some encouragement from a close friend, I sought help from my general practitioner. I am now taking antidepressants and, if nothing else, I am coping with my problems. I am now able to evaluate situations and not panic, and I am no longer existing on a daily dose of fear. My company has been wound up and, although I have been left with debt above and beyond anything someone my age would choose to have, I consider myself fortunate. Through close contacts within my industry, I am now very happy in a sales development role with another company, and this has given me a new lease on life. Eventually, I began seeing a psychologist, which has also been very helpful.

What have I learned from the roller coaster of the past few years?

On a personal level, friends and family have stuck by my wife and me, and most certainly I have gained a great deal of patience and understanding. Having faced my mortality, I now see the world and people in a completely different light, and things I once took for granted have taken on a new importance.

After a wonderful 38-year marriage, I feared that our financial difficulties would have a crushing effect on my wife. Naturally, she now worries a great deal about our future but, like many women in similar situations, she has been supportive and strong and our relationship is more solid than ever.

My experience has also encouraged me to be a little more outspoken about the psychological consequences of prostate cancer treatment. In retrospect, I think I was depressed for some months before I received help, but I was reluctant to acknowledge any weaknesses. Certainly, no one recognised any symptoms of depression in the close monitoring of my physical recovery. I clearly managed to hide my fears and thoughts from them.

It is all well and good that a doctor asks if you are doing OK. My gut feeling is that most men would say they were fine, irrespective of their true feelings. I certainly did, and many of the men I have spoken to or have met who have been through prostate treatment have said the same thing.

The doctor’s first and absolute priority is to eradicate the prostate cancer, to ensure, where possible, the patient’s complete physical recovery. In doing this, though, the psychological aspects of the treatment and the recovery often seem somehow to be left to one side. I don’t believe doctors ignore this aspect. However, in the midst of referrals to the urologist, radiation oncologist, endocrinologist, and scans and blood tests and so on, how the patient is coping psychologically does not receive enough attention.

I would suggest that, for men with prostate cancer, doctors should consider routinely referring their patients to a psychologist or social worker, and should also help them to get in touch with other men in the same situation through a support group.

Where to from here?

My most recent blood tests show my PSA level at 0.4 and my testosterone level back around 27. I am still struggling with impotence, but I believe improvement is possible. I am continuing to take antidepressants and the doctor believes I should keep taking them until the fallout from the collapse of my business has been cleared up. The personal financial burdens still weigh heavily on me and some level of concern remains. Consultations with a psychologist have helped me enormously, and I think there is only a little way to go to resolve my personal issues.

I will continue to be active in cancer support groups, as I believe there are many men struggling alone with their problems, and much still needs to be done to raise the public’s awareness of prostate cancer, just as women have battled to raise the profile of breast cancer. The plight of men with prostate cancer should receive the same level of understanding. We need to help those involved in treating prostate cancer to accept that dealing with the inevitable psychological problems is as important as fixing the physical problem.