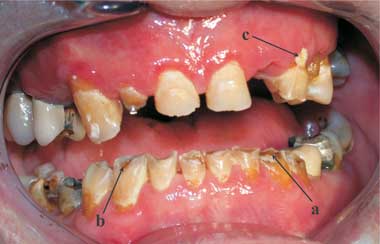 A 22-year-old man presented with badly decayed teeth and generalised dental pain. Intraoral examination revealed rampant dental caries, enamel erosion and generalised calculus deposits (Box). The patient had a 2-year history of daily use of crystal methamphetamine, administered intravenously or via snorting. He complained of a dry mouth, which led him to consume 2–3 litres of carbonated beverages a day, and reported periods of jaw clenching and temporomandibular joint discomfort on waking.

This clinical syndrome in methamphetamine users, which has been referred to as “meth mouth”,1 can be attributed to several factors: the acidic nature of the drug, its xerostomic effect and propensity to cause cravings for sweetened carbonated beverages; drug-related tooth grinding and clenching; and extended periods of poor oral hygiene. Treating dentists should avoid the use of nitrous oxide, narcotics and vasoconstrictors. Early interventions, such as dietary counselling, application of fluoride varnish and dental plaque control, can prevent significant damage to the teeth.