A case of human cutaneous anthrax 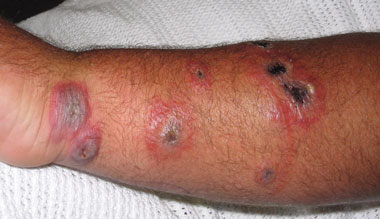 A 48-year-old farmer, with a history of type 2 diabetes, hypertension and hypercholesterolaemia, presented to the local hospital with fever, malaise and inflamed lesions on his hands and arms. He reported that about 5 weeks before his presentation at hospital, he had grazed his arms while clearing the loading auger on a grain harvester on his property in south-western New South Wales. Within days of the initial injury, pimples appeared at the grazed sites and these developed into larger inflamed lesions over the following weeks. He reported that during this time he scratched one lesion and pus was released. The patient was admitted and commenced on intravenous flucloxacillin with a provisional diagnosis of cellulitis. Cutaneous anthrax was not considered as a diagnosis. Oral erythromycin was added to his treatment the following day.

Swabs from the lesions were collected on the day of admission and sent to the local laboratory for routine culture. Staphylococcus aureus was isolated, as well as a Bacillus species, which was thought to be a wound contaminant.

Two days after admission, a nurse at the hospital noted the appearance of the lesions and discussed the patient with infectious disease control officers in the population health unit. The nurse provided photographs, and the characteristic appearance of the lesions in a farmer from the anthrax belt raised the suspicion of cutaneous anthrax. (Figure) The centres of the lesions were depressed and some had formed black scabs. The surrounding tissue was red and oedematous with extensive swelling. These were noted as characteristic features of cutaneous anthrax eschars.1 The local laboratory then performed a gram stain of the Bacillus sp. This suggested Bacillus anthracis, and the isolate was forwarded the following day to the Institute of Clinical Pathology and Medical Research.

The appearance of the lesions in a farmer from an anthrax-prone area and the Gram stain of the organism led to a provisional diagnosis of cutaneous anthrax. Antibiotic treatment was changed 2 days after admission to intravenous penicillin for 6 days. One day before discharge, the patient commenced a course of oral ciprofloxacin. The patient made a full recovery.

Gram stain of the isolate revealed large, square-ended, gram-positive rods containing oval, central to subterminal spores that did not swell the cell. The isolate produced dull, flat, white-grey non-haemolytic colonies, 3–5 mm in diameter on horse-blood agar aerobically after 24 hours’ incubation. The colonies showed characteristic comma-shaped outgrowths along the edge and were sticky when touched with an inoculating loop. The organism was non-motile in broth medium after 4 and 24 hours’ incubation. These findings are consistent with B. anthracis. Bacterial cell wall long-chain fatty acid analysis was performed using the Microbial Identification System (MIS) (MIDI Inc., Newark, Delaware, USA). MIS identified the isolate as B. anthracis when compared with library entries on the Bioterrorism database. On cluster analysis, the isolate clustered with previous isolates of B. anthracis.

The B. anthracis-specific polymerase chain reaction (PCR) assay was performed.2 Briefly, this is a PCR system that detects five target gene sequences present in the chromosome, and virulence plasmids pX01 and pX02. The chromosomal marker (Ba813) is present in all B. anthracis strains. Virulent strains of B. anthracis are encapsulated and toxigenic. Plasmids pX01 and pX02 are both required for virulence, and the absence of either results in attenuation. The PCR assay on this organism gave a positive result for all five targets

Anthrax is a bacterial infection resulting from endospores of Bacillus anthracis, a gram-positive, rod-shaped bacterium, entering the body through skin abrasions or by inhalation or ingestion.1 The cutaneous form accounts for more than 90% of all human cases of anthrax worldwide.3 Anthrax is a zoonosis, and normally affects grazing animals such as sheep, cattle and goats. Animals usually become infected by ingesting anthrax spores, which remain viable in the soil for many years; the spores are resistant to desiccation and ultraviolet light.4

In New South Wales, anthrax in animals is a notifiable disease under the Stock Diseases Act 1923 administered by the NSW Department of Primary Industries (DPI). The DPI has responsibility for monitoring known anthrax properties and controlling outbreaks of animal anthrax. Most outbreaks in NSW occur in the “anthrax belt”, which runs through the middle of NSW and into northern Victoria. The area is bordered by Moree and Bourke in the north and Albury and Deniliquin in the south. About three properties per year in NSW experience an anthrax outbreak.5

Cutaneous anthrax in humans usually results from direct contact with infected animals or animal products such as wool, meat or hides, and is generally an occupational hazard. The head, forearms and hands are the most common sites of infection.4 The lesions are not usually painful, but pain may result from oedema or secondary infection. The differential diagnosis includes conditions producing papular lesions with regional lymphadenopathy. If the lesions are purulent, staphylococcal lymphadenitis is the most likely cause, although secondary staphylococcal infection may occur with cutaneous anthrax.1

Human cutaneous anthrax is rare in Australia, with the most recent cases reported in 1998 in a forklift driver in Queensland and in 1997 in a knackery worker in northern Victoria.6 The last known case in NSW occurred in 1991, in a worker who was slaughtering sheep on a property in the anthrax belt.7

The source of infection in our patient remains unclear, despite the farm being an anthrax-prone property. The farmer had not reported any recent animal anthrax on the property, although animal outbreaks had occurred in previous years. The spores might have been introduced directly from the soil at the time of the injury, or entered the wounds later following contact with soil, animals or other products contaminated with anthrax spores. Animal anthrax is more likely to occur following a climate change such as heavy rain after a prolonged drought.5,8 About a week before the farmer sustained the injury, the property, which had experienced drought for number of years, received more than 40 mm of rain.

Public health action included discussion of the nature of the infection with the patient and staff of the health facility, who were reassured that cutaneous anthrax is not transmissible from person to person and that the vegetative form of the bacterium is not infectious.1 Contact was made with the regional veterinary officer of the DPI, according to arrangements that provide for the exchange of information on zoonotic diseases.

Routine vaccination and surveillance of stock, as well as the rapid identification and management of animal anthrax incidents are key actions required to reduce human cutaneous anthrax. Additionally, a high level of awareness among farm workers and health care staff will support the early diagnosis and appropriate treatment of human cases. Prevention through vaccination is not possible in Australia, as a human anthrax vaccine is not registered in Australia.9

The characteristic eschar lesions and the absence of fever, pain and pus, along with a history of contact with animals or animal products, should suggest anthrax.1 However, secondary infection, as occurred in our patient, can produce purulent lesions and fever and mask the initial cause of infection. Cutaneous anthrax is generally self-limiting and resolves without complications. The infection responds rapidly to antibiotic treatment, and oral penicillin is generally highly effective for cutaneous disease, rendering lesions sterile after 24 hours.1 The CDC now recommend oral ciprofloxacin or doxycycline for cutaneous anthrax. This recommendation follows the use of spores of a β-lactamase-positive anthrax strain as a bioterrorism agent.12 Spread to regional lymph nodes and septicaemia occurs in about 20% of untreated cases of cutaneous anthrax.3 Intravenous therapy with a multidrug regimen is recommended for cutaneous anthrax with systemic involvement.12

In our patient, anthrax was not initially considered as a diagnosis, which may indicate a need to raise awareness of cutaneous anthrax among health care workers in the anthrax belt. It is also important that staff working in regional pathology laboratories are aware of the tests that can be undertaken at a local level and those that need to be referred to a reference laboratory for the diagnosis of human anthrax.

The authors acknowledge Ms Helen Thatcher who took the photograph.