Hendra virus infection in a veterinarian

Hendra virus (HeV) and Nipah virus together comprise the genus Henipavirus within the family Paramyxoviridae (Box 1).1 HeV, formerly called equine morbillivirus, was first described after an outbreak of severe respiratory disease in horses, leading to the deaths of 14 horses and a horse trainer in Brisbane in September 1994.2,3 The trainer had had very close manual contact with frothy nasal and oral secretions, some of which were blood-tinged, from several of the very ill horses, as did a stable-hand; he developed an influenza-like illness but made a full recovery. The horses and both people were infected with HeV.2,3

An earlier outbreak of HeV disease was not recognised until the death, in 1995, of a farmer in Mackay. He had assisted his veterinarian wife with the autopsies of two horses that died suddenly from unknown cause in August 1994. He was hospitalised about 2 weeks later with an aseptic meningitis, from which he apparently made a full recovery.3,4 However, about a year later he became acutely unwell again, and died from a severe encephalitis caused by HeV.3,4 The two horses were (retrospectively) shown to have also been infected with HeV.5

After these two outbreaks, extensive investigations identified fruit bats (Pteropus spp.), commonly known as flying foxes, as the likely natural reservoir of HeV; the infection is probably subclinical in most infected flying foxes.6,7 Although it is not certain how HeV could be transmitted from flying foxes to horses, the isolation of the virus from uterine fluid and aborted fetal tissue of flying foxes suggests that horses could ingest the virus on feed or pasture recently contaminated by birth products (Box 2).6,7 The available evidence indicates that transmission of the virus from horses to people, albeit rare, occurs through physical contact with nasal and oral secretions emanating from very ill, dying or dead horses.8

The third recognised outbreak of HeV disease occurred in January 1999, when a horse in a northern suburb of Cairns died from pneumonia.9 No human infection associated with this equine HeV case was detected.

We report here the fourth known outbreak of HeV infection and discuss the implications of this recently emerged virus for veterinary practice.

In early November 2004, a veterinarian notified the Tropical Population Health Unit (TPHU) in Cairns that one of his colleagues had become unwell a week after performing an autopsy on a horse. Two other people who had assisted with the autopsy, both members of the family who owned the horse, had apparently also become unwell, and the notifying veterinarian asked about the possibility of HeV infection in the three individuals.

The horse: The horse was a 10-year-old gelding located on a property about 25 km south of Cairns. It had been acutely unwell for 1 day, with restlessness, increased respiratory effort and profuse sweating. On examination, the horse was febrile (41°C per rectum), tachycardic (120 beats/min), markedly dyspnoeic and very weak; it lay in a lateral recumbent position and could not raise its head. It was very dehydrated, and had injected mucous membranes and large amounts of blood-stained frothy secretions issuing from its nose. A decision was made to euthanase the horse, but it had a convulsion and expired before this could be performed. Blood-stained froth emanated from its nose and mouth as it died.

Autopsy on the horse: Because the diagnosis was uncertain, the treating veterinarian performed a limited autopsy on the horse in the paddock where it died. She initially wore gloves, but quickly abandoned these as they were not of an appropriate design and soon became contaminated inside. No other personal protective equipment was used. For the procedure she had to reach deep into the carcass to examine some internal organs.

The autopsy resulted in the veterinarian becoming heavily contaminated with the horse’s body fluids, especially those from the abdominal cavity. Contamination from the thoracic cavity was less, as this was opened only through a relatively small “window” over the heart. The veterinarian had a thorough shower immediately on returning home after completing the autopsy.

The main gross findings at autopsy were massive fluid congestion of the lungs, cardiomegaly with marked thickening of the ventricular walls, and a grossly enlarged liver. The veterinarian concluded that the horse had died from acute heart failure and pulmonary oedema of unknown aetiology; no tissue samples were collected for further laboratory studies. At the completion of the autopsy, the horse was deep-buried using a back hoe.

The veterinarian: Seven days after performing the autopsy, the veterinarian developed a dry cough and sore throat, associated with cervical lymphadenopathy and a fever lasting 4 days. She had generalised body aches and was very tired. The illness continued for about 8 days, during which time she was unable to work. She was seen 2 days after the onset of symptoms by a medical practitioner who had been informed (by the TPHU) of the possibility of HeV infection. However, the practitioner considered that her illness was consistent with a tonsillar infection and prescribed an antibiotic; blood was collected for HeV laboratory studies only. Follow-up serum samples were collected for further HeV studies at 14, 30, 50, 363, 470 and 559 days after the onset of symptoms.

Laboratory studies: HeV RNA was not detected by a reverse transcriptase polymerase chain reaction (RT-PCR) (TaqMan) assay10 on the initial serum sample. Similarly, HeV IgM and IgG antibodies were not detected by either immunofluorescence assay (IFA) or enzyme-linked immunoassay (EIA).11 However, the subsequent samples demonstrated clear HeV IgM and IgG seroconversions by both IFA and EIA. A serum sample taken nearly a year later was initially reported as having a very high antibody titre on IgG IFA (>1024), but on repeat testing this was revised to a level of 512 (Box 3). Subsequent antibody levels have fallen by one dilution. A plaque reduction neutralisation test11 showed that the serum collected 14 days after the onset of illness neutralised HeV at a dilution of 1 : 5.

Autopsy assistants: An adult member of the family who owned the horse held the dying animal’s head; two others assisted with the autopsy. All three were exposed to the frothy nasal secretions to varying degrees. Although the two who assisted were reported as having become unwell after the procedure, further investigation revealed that neither had a febrile illness. Rather, both seemed to have had symptoms of pre-existing conditions. HeV serological studies on samples collected from all three adults 3–4 weeks after the autopsy did not show any evidence of HeV infection.

Site visit: A site visit took place on the day of the notification to TPHU, which was about 2 weeks before laboratory confirmation of HeV infection was obtained. The paddock was in a semi-rural area and held seven other horses, all of which appeared in good health. It was surrounded by other paddocks, some of which held horses. There was no obvious flying fox colony nearby; the owner of the property voluntarily quarantined the property (not allowing any horse movement in or out). Once the HeV infection in the veterinarian was confirmed, the other seven horses in the paddock were tested for serological evidence of HeV infection (38 days after the horse died); all were negative. The quarantine was subsequently lifted.

Although no samples were collected from the horse, with hindsight it clearly had an illness consistent with previous clinical reports of HeV disease in horses. The disease is usually fulminant in nature, with fever, tachycardia, respiratory distress and a frothy nasal discharge being the typical reported features in horses.8,12 Facial oedema, physical distress and unease (suggestive of colic), and the close proximity of flying foxes add further support to the clinical suggestion of HeV disease in horses.12 The most obvious gross pathology is marked fluid congestion in the lungs, with a thick, foamy haemorrhagic exudate in the airways.8

Although there was no obvious flying fox colony nearby, large numbers of flying foxes are usually obvious in the evening sky in the latter part of the year in and around Cairns. The timing of the horse’s illness is not only the flying foxes’ birthing season,13 but also the season for many domestic and rainforest fruits in Far North Queensland; flying foxes travel considerable distances on nocturnal forays from their colonies in search of these foods. The owner of the horse reported frequently seeing flying foxes in the vicinity of the property.

We assume that the veterinarian’s symptoms were caused by HeV, occurring after an apparent incubation of 7 days. Unfortunately, haematological and biochemical investigations were not requested after her initial medical consultation. The illness was mild, despite her being heavily contaminated with blood and body fluids during the autopsy.

This veterinarian is the fourth person known to have been infected with HeV. All four had direct exposure to secretions and tissues from very ill, dying or dead horses; two were directly involved in autopsies of these horses. Two of the four died, whereas the other two had relatively mild illnesses.2-4

The veterinarian has remained clinically well for 2 years since her initial illness. A rise in the antibody titre 1 year after the initial illness was of concern in view of the observed late neurological relapse (13 months after acute illness), associated with increasing antibody levels, in one of the other cases of HeV infection.4 The closely related Nipah virus has also been associated with late neurological relapse in 7.5% of cases, occurring up to 22 months after initial infection.14 In one case, late-onset Nipah virus encephalitis coincided with rising antibody titres.15

The veterinarian undertook a high-risk procedure, taking less than optimal precautions. She was a relatively recent graduate, and her training may not have adequately impressed upon her the need to undertake such procedures with due care. Just as human health workers have had to accept that several recently emerged viruses (eg, blood-borne viruses and the SARS coronavirus) have changed working procedures, those working in animal health also must accept that recently emerged zoonotic viruses (eg, HeV and Australian bat lyssavirus) necessitate appropriate working procedures and personal protective equipment in veterinary practice.

After this HeV incident, the Queensland Department of Primary Industries and Fisheries published revised guidelines for veterinarians handling horses suspected of being infected with HeV.12 These guidelines provide clinical case definitions and the recommended response measures, including the personal protective equipment that should be used when managing a suspected case, and the necessary reporting procedures.12 We suggest that these guidelines should be widely disseminated throughout the Australian veterinary community.

In early December 2004, a horse on a property just south of Townsville died of laboratory-confirmed HeV disease; there were no human infections associated with this fifth recognised outbreak of HeV disease. In mid June 2006, a horse on a property near Peachester on the Sunshine Coast hinterland died of laboratory-confirmed HeV disease; to date there have been no apparent human infections associated with the sixth outbreak of HeV disease.

1 Electron micrograph of the Hendra virus 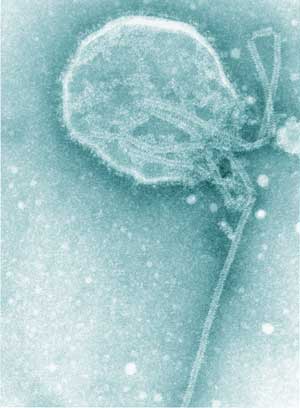 3 Hendra virus (HeV) laboratory studies in serum collected from the veterinarian at various intervals after the onset of symptoms. The onset occurred 7 days after the autopsy of the horse