Once considered a biological waste product, umbilical cord blood (UCB) has emerged as a viable source of haematopoietic stem cells for transplantation. At the time of World War II, stored placental blood was explored as a source of blood for transfusion, and found to be similar in effect to fresh adult blood.1 During the 1970s, it was recognised that UCB contains haematopoietic progenitor cells.2,3 The suggestion that cryopreserved UCB could be used as a source of stem cells in much the same way as transplantation of bone marrow4 paved the way for the first successful human UCB transplant, performed in France in 1988.5 The recipient remains alive and well 18 years later.

This review focuses on the benefits and current limitations of UCB, clinical results in paediatric and adult patients undergoing unrelated UCB transplant, strategies to improve results, and future direction and use of cord blood.

Haematopoietic stem cell transplantation (see Box 2 for glossary of terms) is an accepted therapy for many cancers or inherited disorders that originate or manifest as primary abnormalities of the blood or bone marrow. Transplantation can use stem cells collected from the patient (autologous) or from a suitably matched donor (allogeneic). Donor–recipient compatibility is determined by matching for specific human leukocyte antigens (HLAs). Within families, sibling pairs have a one in four chance of HLA identity, as each child inherits one of each of the two maternal and paternal haplotypes. Registries have been created to help identify volunteer bone marrow donors for patients lacking a family donor. Despite there being almost 10 million registered adult donors worldwide, only 50% of white patients will have a suitable bone marrow match.8 The likelihood of finding a compatible donor is even less for ethnic minority groups, which are poorly represented in the registries. Clearly, there is a need for an alternative source of stem cells for transplantation.

Umbilical cord blood contains one-tenth of the number of stem cells found in bone marrow. Nevertheless, because of certain biological properties of UCB compared with bone marrow, UCB cells will grow or “engraft” in most patients and result in reconstitution of the haematopoietic and immune cells.9,10

Advantages of UCB include no risk to the donor, reduced risk of viral contamination of the graft, rapid donor identification, and faster availability (Box 3). Cord units are pretested and stored frozen in accredited public banks worldwide. Australia has more than 12 000 stored units available, with donations increasing daily. Speed is important, particularly in high-risk malignancies and congenital neurodegenerative disorders, when time to transplant can affect survival and neurological outcome. Compared with unrelated bone marrow, which can take on average 4.5 months from initiation of search to procurement of marrow from a donor, time from search to transplant using UCB can be as little as 3 weeks.11 Furthermore, most patients who do not have a matched bone marrow donor are likely to have a suitably matched UCB unit. This is because there is tolerance for HLA disparity, postulated to be due to the relative immunological naivety of UCB, which results in less graft versus host disease (GVHD), a major limitation of transplanting unrelated donor cells.

The main disadvantage of UCB is the inferior speed of haematopoietic cell recovery and higher graft failure rates compared with bone marrow. This relates directly to cell dose, which is calculated on the recipients’ weight. Thus, while most UCB units contain sufficient cells for rapid engraftment of young children, it may be difficult to identify a suitably matched UCB unit with acceptable cell content for older children and adults.

On balance, these studies confirm that UCB is a safe stem cell source for paediatric patients who lack a matched sibling donor. Survival rates are similar to results using unrelated bone marrow; however, engraftment failure rates are higher and speed of recovery of neutrophil count less optimal with UCB. This can be minimised by selecting better-matched UCB grafts with higher cell doses.

Similar results were published in a European study comparing 98 adult patients with leukaemia receiving a single unrelated UCB transplant with 584 patients receiving matched bone marrow.18 Unlike the US study, which included patients with chronic myeloid leukaemia or myelodysplastic syndrome, only patients with acute leukaemia were analysed in the European study. Longer time to neutrophil recovery was seen in UCB recipients. The incidence of chronic GVHD, transplant-related mortality, relapse rate, and leukaemia-free survival were not significantly different in the two groups. The authors concluded that UCB is an alternative to unrelated bone marrow in adult patients with acute leukaemia.

Compared with the US and European published data, better results have been recently published by Japanese investigators.19 Sixty-eight adult patients receiving unrelated UCB were compared with 45 receiving unrelated bone marrow. Although speed of neutrophil and platelet recovery was slower in the UCB recipients compared with the bone marrow recipients, overall likelihood of engraftment was similar between the groups. Severe acute GVHD was significantly lower in UCB recipients, as was transplant-related mortality (UCB, 9%; bone marrow, 29%). Better disease-free survival rates were seen in patients receiving UCB (74%) than in recipients of bone marrow (44%). These results support the use of UCB as a potentially superior stem cell source for transplantation in adult patients with haematological malignancies. It has been suggested that the superior results of UCB in this series compared with the US and European series may relate to the smaller size and genetic homogeneity of the patient population.

Several innovative strategies aimed at increasing the cell dose are being explored to reduce the time to recovery of neutrophils. These strategies include bridging the engraftment period using either an additional allogeneic carrier cell population or by using host haematopoiesis, improving cell homing to the recipient bone marrow space, and ex-vivo expansion to augment cell dose (Box 4).20

Investigators at the University of Minnesota pioneered the technique of giving two unrelated UCB units as a strategy to augment cell dose.21 In a small series of adult patients, two unrelated UCB units were infused simultaneously. Despite the theoretical risk of bidirectional immune rejection, engraftment was achieved in all patients. Additionally, speed of engraftment was better than with single unit transplants. Furthermore, there was a marked reduction in relapse rates in recipients of two units.22 Interestingly, both units contribute to neutrophil recovery initially, but by Day 100 only a single unit continues to contribute to haematopoiesis. It has been suggested that one unit appears to act as a “fertiliser” for the other.

The toxicity associated with myeloablative conditioning regimens often precludes older or more debilitated patients from allogeneic transplantation. To overcome this problem, reduced intensity regimens have been developed. In addition to the benefits of reduced organ toxicity, these regimens allow persistence of host haematopoiesis to shorten the duration of neutropenia, while allowing donor cell engraftment to occur. Using unrelated single or double UCB units, reliable and sustained engraftment has been demonstrated after non-myeloablative therapy in 59 adult patients with high-risk haematological malignancies.16 Neutrophil recovery was observed in all but one patient at a median of 8 days (range, 5–32 days), with a cumulative incidence of sustained donor engraftment of 89%. Early recovery of neutrophils was demonstrated to be due to host haematopoiesis; however, this was temporary with donor UCB cells ultimately responsible for haematopoietic recovery in all patients by Day 100 post-transplant.

Ex-vivo expansion of UCB is theoretically an enticing strategy to overcome the limitation of low cell dose. Despite preclinical studies showing reliable expansion of committed progenitors, repeated phase I studies have failed to show convincing improvements in either probability or speed of engraftment.23 However, with optimisation of culture methods and delivery strategies, ex-vivo expansion has the potential to be an important therapeutic tool in the future.

Improvement of stem cell homing is another strategy currently being explored to improve engraftment following UCB transplantation. Animal experiments have shown that 97% of infused UCB cells are lost during migration from the peripheral blood to the bone marrow. One strategy to circumvent this problem is to directly inject cells into the bone marrow rather than infuse via a peripheral vein. A study using NOD/SCID mice demonstrated that direct intra-osseous injection of UCB cells results in around a 15-fold increase in the frequency of repopulating cells.24 Recruitment for a human clinical trial using this approach will begin shortly; the proposal is to use two unrelated UCB units with one unit to be injected in situ via the intra-osseous route.

The ability of haematopoietic progenitor cells to differentiate into cells other than blood or immune cells (referred to as “plasticity”), has led to speculation about the potential for therapeutic application across a range of inherited and acquired diseases. For example, transplantation of isolated endothelial and mesenchymal-like progenitor cells from UCB prolongs survival in animal models of diabetes, Parkinson disease and Alzheimer disease.25-27 Similarly, infusion of a subpopulation of cells derived from UCB enhances morphological and functional recovery in an animal model of stroke.28 Although clinical usefulness of this line of research is still to be established in human trials, it represents an exciting potential growth area for the use of UCB cells as a therapeutic modality. 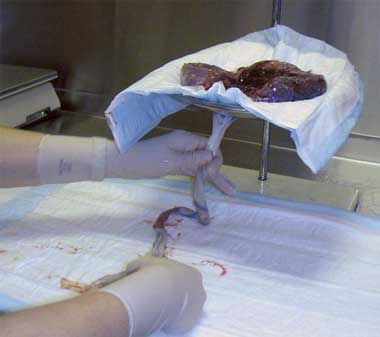 Blood is drained from the umbilical cord vessels either in-utero or ex-utero immediately after delivery.

Haematopoietic stem cells: self-renewing cells that can repopulate all the cell lineages in blood. Immature haematopoietic progenitor cells (CD34+) or total nucleated cell dose are surrogate measures of the stem cell dose in the transplant product.

HLA matching: human leukocyte antigens (HLAs) determine the immunological identity of a cell and are encoded by genes within the major histocompatibility complex (MHC). Antigens are inherited from parents as a unit or haplotype, and genes that encode HLA antigens are highly polymorphic. Conventional matching between donor and recipient requires matching of both antigens at class I (A and B) and the class II (DRB1) antigen, resulting in a 6/6 match. Immune complications after transplant are a result of differences in HLAs between donor and recipient.

Myeloablative conditioning: destruction of the patient’s bone marrow by chemotherapy or radiation.

Engraftment: recovery of neutrophil count to > 0.5 × 109/L for 3 consecutive days. This is reported as speed of engraftment (in days) or probability of occurring before a time point (usually 42 days).

Acute graft versus host disease: Post-transplant complication in which the donor immune cells recognise the host cells as foreign and attack organs, including skin, liver and gut. This can be lethal.

Disease-free survival: proportion of patients surviving without disease at a given time point.

Overall survival: proportion of patients surviving (regardless of disease or remission status) at a given time point.

Transplant-related mortality: also called non-relapse mortality, this is death due to transplant complications (eg, rejection, infection, graft versus host disease). It does not include death due to relapse of disease.