Middle lobe syndrome — recurrent atelectasis and/or bronchiectasis involving the right middle lobe and/or lingula — has, up to now, not been reported as the pulmonary manifestation of primary Sjögren’s syndrome. We describe a patient in whom lymphocytic bronchiolitis in the atelectatic lobes was proved histologically from two separate transbronchial biopsies. The atelectasis responded well to glucocorticoid treatment, suggesting that the peribronchiolar lymphocytic infiltrates may have played an important role in the development of middle lobe syndrome in this patient.

A 53-year-old woman was admitted to our hospital in 2003 with symptoms, for the past 3 days, of shortness of breath, cough, and blood-tinged sputum. Primary Sjögren’s syndrome had been diagnosed in 2002, based on the presence of xerostomia, keratoconjunctivitis sicca, anti-Ro/La antibody, and rheumatoid factor, as well as a positive Schirmer’s test and the results of sialoscintigraphy.

The patient had no prior history of smoking, fever, rhinitis or pharyngitis. Physical examination was unremarkable, except for a rapid respiratory rate (20 breaths/min) and coarse crackles heard during the early inspiratory phase in the middle lung field. A complete blood count, C-reactive protein levels, erythrocyte sedimentation rate, and the results of serum biochemistry were all within normal limits. A chest x-ray revealed a vague opacity in the right lower lung that obliterated the cardiac border in the posteroanterior view, and a wedge-shaped density in the cardiac area in the lateral projection (Box, A). Sputum studies for bacteria, mycobacteria and fungi, and serological tests for Mycoplasma pneumoniae and Legionella pneumophila all gave negative results.

A computed tomography (CT) scan of the chest showed inhomogeneous opacities, as well as dilated airways crowded in the medial segment of the right middle lobe and inferior segment of the lingula, without mediastinal lymphadenopathy (Box, B). A fibrobronchoscopic examination to verify central bronchial patency showed no intraluminal obstruction in the affected bronchi. Cultures of the lavaged bronchial fluid were negative for tuberculosis and other microorganisms, and no malignant cells were found in aspirated specimens. A transbronchial biopsy from the atelectatic middle lobe revealed lymphocytic bronchiolitis with a moderate degree of mononuclear cell infiltration, predominantly by lymphocytes, in the terminal bronchiolar walls and adjacent interstitial areas, and no granuloma formation (Box, C).

A diagnosis of middle lobe syndrome secondary to Sjögren’s syndrome was made and the patient was initially treated with methylprednisolone (125 mg/day for 4 days), followed by prednisolone (20 mg/day). The glucocorticoid dose was tapered off as the atelectatic lesions resolved. A repeat CT scan performed 1 year later showed that the atelectatic lesions had almost completely disappeared with this treatment (Box, D). Subsequently, the prednisolone dose was ceased.

In 2005, atelectasis developed once again in the lingula. Malignancy and infection were excluded after extensive studies, including cytological examination, virus isolation, and bacterial and mycobacterial cultures from the endobronchial aspirates. Pulmonary tissue, obtained from the atelectatic lingula by biopsy, again showed evidence of lymphocytic bronchiolitis. With the use of medium-dose prednisolone (20 mg daily), the atelectasis gradually resolved. At the time of writing, there has been no further relapse in this patient.

Middle lobe syndrome is a disorder of recurrent or fixed atelectasis involving the right middle lobe and/or lingula.1-3 It can result from either extraluminal or intraluminal bronchial obstruction, but also may develop in the presence of a patent lobar bronchus without identifiable obstruction.1-3 Inflammatory processes and defects in the bronchial anatomy and collateral ventilation have been designated as the non-obstructive causes of middle lobe syndrome.1-3

Middle lobe syndrome is commonly associated with many underlying lung conditions, such as neoplasms, asthma, broncholithiasis, microbial infections, granulomatous disorders, mucous plugging, or foreign body aspiration.1,2 It has, up to now, not been reported in patients with primary Sjögren’s syndrome, although similar radiological findings have been described in a patient with systemic lupus erythematosus with suspected secondary Sjögren’s syndrome.4

Primary Sjögren’s syndrome is a chronic inflammatory autoimmune disease characterised by lymphocytic infiltrations in the involved organs. This disorder predominantly affects the salivary and lacrimal glands, but can also involve internal organs resulting in many extraglandular complications.5 A wide spectrum of pulmonary manifestations has been described, including xerotrachea, obstructive airway disease, interstitial lung disease, and lymphoproliferative disease.6

With pulmonary involvement in primary Sjögren’s syndrome, the inflammation can be focal and predominantly cellular, with lymphocytes infiltrating the small airway walls.7,8 Local bronchial or bronchiolar lymphocyte infiltrates and inflammatory cell products may lead to impairment of tracheobronchial mucociliary clearance.8,9 In our patient, lymphocytic infiltrations in the terminal bronchioles were found in the atelectasis of the right middle lobe and lingula. The atelectatic and bronchiectatic lesions seen on the chest CT scan resolved after immunosuppressive drug treatment. Lymphocytic bronchiolitis with underlying bronchiectasis has also been described in patients with non-obstructive middle lobe syndrome.

Our findings suggest that the peribronchiolar lymphocytic infiltrates may have been involved in the pathogenesis of the middle lobe syndrome in our patient. Lymphocytic bronchiolitis is common in primary Sjögren’s syndrome, but pulmonary atelectasis, as in our patient, is fairly rare.6,10,11 Therefore, mechanisms other than impaired mucociliary function and lymphocytic bronchiolitis may also have contributed to the development of this disorder. The right middle lobe bronchus is at higher risk of obstruction from inflammatory processes, as it has a relatively narrow diameter and an angular attachment to the intermediate bronchus. Compared with other areas of the lung, the middle lobe and lingula have a large ratio of pleural to non-pleural surface because of the presence of deep fissures, which are effective barriers to the collateral ventilation.,3 These anatomical features may thus predispose to the formation and persistence of atelectasis.

Immunosuppressive drugs, either azathioprine alone or in combination with prednisolone, are effective in treating the pulmonary complications of primary Sjögren’s syndrome.7 In our patient, the lymphocytic bronchiolitis-associated atelectasis resolved after prednisolone therapy, but relapsed when the drug was ceased. Therefore, we think that immunosuppressive drugs, such as glucocorticoids, should be considered in this unusual pulmonary complication of primary Sjögren’s syndrome. Tapering of the dose must be gradual to avoid disease recurrence, and a long follow-up period is necessary. 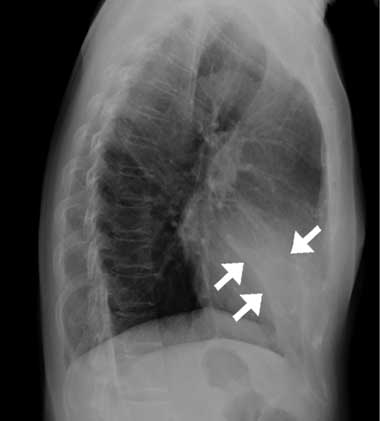 A: Lateral chest radiograph showing a wedge-shaped dense area (arrows) with the apex pointing to the hilum. 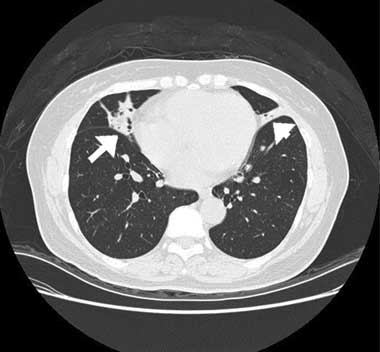 B: Computed tomography scan of the lung showing atelectasis and bronchiectasis in the medial segment of the right middle lobe (arrow) and the inferior segment of the lingula (arrowhead).
No pulmonary fibrosis or space-occupying lesion was observed elsewhere. 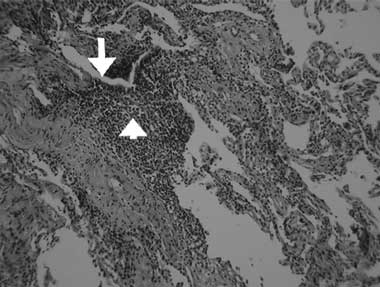 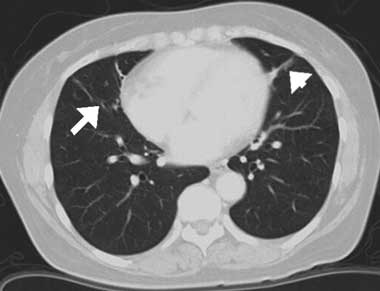