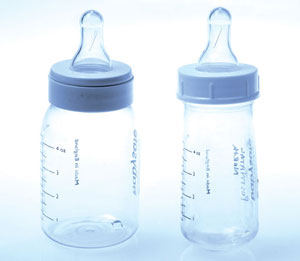 Hospitals use appropriate sterilisation to prevent transmission of infection among infants from such items as reusable feeding bottles. But what happens when the sterilisation process results in potential harm to the infant in other ways? We describe an incident in which a wrong sterilisation method resulted in an infant being fed with a shrunken feeding bottle.

A full-term male infant weighing 2290 g at birth was prescribed formula feeds for low birthweight and neonatal abstinence syndrome. An agency nurse handed the mother a sterilised 120 mL plastic bottle for formula feeding. It was amazing to see how this small infant managed to take the full 90 mL with each feed, which was twice his daily requirement.

The explanation became apparent when the nursing unit manager compared the bottle in question with a new 120 mL bottle. While the older bottle was similar in height and even fitted the same teat, it was narrower than the new bottle (Figure). In fact, when the older bottle was filled to the 120 mL mark on the outside, it held only 50 mL!

How had this occurred? Further enquiry established that, before use, this particular bottle, designated as unsuitable for autoclaving by the manufacturer, had mistakenly been autoclaved in the Central Sterile Supply Department (CSSD) instead of being chemically sterilised on the ward. Fortunately, the problem was picked up quickly enough to prevent the infant from getting dehydrated.

Sterilisation of feeding bottles can be achieved by thermal or chemical means.1 While some recommend boiling as the preferred option, the use of a sodium hypochlorite solution (eg, Milton, Milton Australia Pty Ltd, Brisbane) is widely accepted by hospitals as a superior form of sterilisation.2

In our hospital, feeding bottles are not normally autoclaved. The only other method of sterilisation at CSSD involves ethylene oxide. This method is felt unsuitable for feeding bottles, given the potential for absorption of ethylene oxide into the plastic. But, every now and then, a bottle finds its way down to CSSD and returns as a slimmer version of its old self. While some types of feeding bottle can be safely autoclaved, this particular range of bottles is unsuitable for autoclaving. We have now replaced the implicated bottles with glass and other autoclave-safe plastic bottles so that this type of incident does not occur again.