Objective: To review our experience with percutaneous radiofrequency ablation (RFA) for osteoid osteoma.

Results: In 23 of 24 patients, there was immediate relief of symptoms. One-third of patients had a return of symptoms. The 24 patients underwent a total of 32 RFA procedures. Of the eight patients who had a recurrence, five had an initial lesion ≥ 10 mm in maximum diameter. Twenty-three of the 24 patients were pain-free at the end of the study period. Patients were followed up for a median of 26 months. There were no long-term complications.

Conclusions: Percutaneous RFA is a safe and efficacious treatment for osteoid osteoma with a low morbidity rate. Despite recurrence after treatment, re-treatment is simple and effective.

An osteoid osteoma is a small, benign bone tumour that occurs in young people. Ninety per cent of cases arise before 30 years of age, with a male predominance. The proximal femur and tibia are the most common sites,1 although occurrence has been reported in most bones. It is characteristically solitary and cortically based, although periosteal and medullary lesions sometimes occur.

The presenting symptom is pain, which is typically dull, unremitting and worse at night. Notably, the pain is relieved by aspirin and non-steroidal anti-inflammatory drugs. Physical signs are unusual unless the lesion is superficial, when there may be local warmth and tenderness. Intra-articular lesions can cause synovitis and joint irritability. Lesions close to the physis can cause growth disturbance and spinal lesions may present as a painful scoliosis.

The unremitting nature of the pain usually leads to a surgical referral. Until recently, treatment has been complete surgical excision of the nidus. Precise intraoperative localisation of the nidus is difficult, often resulting in wide bone resection to ensure adequate treatment. This has resulted in significant surgical morbidity.

Percutaneous radiofrequency ablation (RFA) for osteoid osteoma was first reported by Rosenthal et al in 1992,4 and has been practised in a number of centres around the world.5-9 Because of the significantly reduced morbidity reported, we adopted this technique in 2000. Here we present our experience to date.

Retrospective review was made of all patients (n = 24) with a diagnosis of appendicular osteoid osteoma treated by percutaneous RFA within the Bone and Soft Tissue Tumour Service at St Vincent’s Hospital, Melbourne, between August 2000 and February 2005. There were six females and 18 males, with a median age of 20 years (range, 10–51 years; 25th percentile, 17 years; 75th percentile, 23 years).

Preoperative evaluation by clinical history and radiological investigation was performed and reviewed in the service’s weekly multidisciplinary clinical conference by surgeons, radiologists and pathologists. In all cases, a nidus with surrounding radiodense bone was demonstrated on a CT scan, and technetium-99M HDP bone scintigraphy showed increased tracer uptake within the lesion. Dynamic contrast imaging was routinely employed to characterise the nidus.3

All patients consented to undergo percutaneous RFA to obtain improved pain relief and destruction of the nidus.

All procedures were performed jointly by the treating surgeon and an interventional radiologist in the CT room after administration of general anaesthesia. The lesion was localised and needle trajectory planned using the CT scanner and CT fluoroscopy. Under sterile conditions, a small stab incision (< 5 mm) was made over the needle insertion site and a Bonopty core biopsy needle (Radi Medical Systems, Uppsala, Sweden) inserted under CT guidance into the nidus. The bone core from the needle track was sent for histological analysis.

An insulated SMK C-15 electrode (Radionics, Burlington, Mass, USA) was inserted through the Bonopty cannula into the lesion and its position confirmed by CT imaging. Thermal coagulation to 90°C for 6 minutes was achieved using a radiofrequency generator (Radionics RFG-3B, Burlington, Mass, USA) as described by Rosenthal et al4 (Box 1A and Box 1B). If the nidus was larger than 10 mm in maximum diameter, the electrode was repositioned within the nidus and further burns were performed to cover the entire nidus. As the needle entered the nidus and ablation was commenced, elevation of the patients’ resting pulse rate by 10–20 beats/minute was commonly observed. At completion of the procedure an adhesive dressing was applied.

We calculated medians and ranges of continuous variables and provided 25th and 75th percentiles of the ranges. Differences between categorical variables were assessed using Fisher’s exact test and P < 0.05 was regarded as significant.

This is a quality assurance review of existing clinical practice and only aggregated data are provided.

Twenty-four patients presented with clinical and radiological findings consistent with an osteoid osteoma. These patients had a median duration of symptoms before presentation of 12 months (range, 3–48 months; 25th percentile, 6 months; 75th percentile, 12 months). The median size of the nidus was 8 mm (range, 2–18 mm; 25th percentile, 5 mm; 75th percentile, 10 mm). There were 12 lesions in the femur, 10 in the tibia and one each in the humerus and fibula. Three of the femoral lesions were intra-articular lesions of the hip.

Histological examination confirmed the diagnosis in 11 of 24 patients. The remainder showed reactive bone, consistent with osteoid osteoma, and excluded infection or neoplasia.

The median burn time for primary percutaneous RFA treatment was 6 minutes (range, 6–18 minutes; 25th percentile, 6 minutes; 75th percentile, 11 minutes). Seven patients underwent multiple treatments. In one case the Bonopty cannula broke during its removal, with retention of a 2 mm long fragment within the tibial cortex. No postoperative complications were reported for this or the other cases.

Twenty-three of the 24 patients experienced immediate relief of symptoms. Eight of the 24 patients had a return of symptoms (seven patients) or failure of the initial burn to relieve symptoms (one patient). Return of symptoms occurred at a median of 8 months (range, 2–12 months; 25th percentile, 3.5 months; 75th percentile, 12 months). Seven of these eight patients underwent repeat RFA; six patients remained symptom-free and one patient had a further recurrence 7 months after the second burn, which was treated successfully by a third RFA. He remains symptom-free at 30 months. One patient was awaiting further treatment for recurrence at the time of review. A total of 32 percutaneous RFA procedures were performed.

Sixteen patients had no recurrence. Of these, in 14 the nidus was less than 10 mm in diameter. Of the eight patients in whom there was a recurrence, five had lesions ≥ 10 mm (P = 0.021, Fisher’s exact test).

The median follow-up time for this series was 26 months (range, 2–56 months; 25th percentile, 16.8 months; 75th percentile, 34.8 months). The follow-up period was greater than 12 months for 20 patients. One patient was lost to follow-up (having left the country), but had no evidence of recurrence 2 years after treatment. Apart from the one patient still awaiting treatment, the remaining 23 patients were pain-free at their final review.

Percutaneous radiofrequency ablation of an osteoid osteoma is a relatively new treatment. Our overall success rate of 96% after multiple treatments compares favourably with the few available reports in the medical literature.5-9

Our recurrence rate of 35% is higher than those in other reports, which range from 5% to 24%.5-9 We observed that recurrence was significantly higher in lesions ≥ 10 mm and five of eight of our patients in this group experienced recurrence. RFA burns an area of about 10 mm in diameter,10 and although lesions greater than 10 mm were burnt in multiple locations, the burn pattern is one of overlapping spheres; it is likely that, in some areas of tumour outside those spheres, ablation was not adequate (Box 2). Woertler et al suggested, on the basis of their patient series, that the larger lesions were more likely to recur.11 Vanderschueren et al reported that multiple needle passes reduced the risk of recurrence and recommended that multiple passes be used in all lesions ≥ 10 mm in maximal diameter.12 We agree with these comments, and with the assertion that recurrences and residual pain are due to viable remnant tissue, rather than a new lesion in situ.6

RFA offers several advantages over other treatments. Previously, surgical excision has been the treatment of choice.13 Precise intra-operative localisation of the nidus is often difficult and en-bloc excision often requires a long incision, extensive dissection and, frequently, internal fixation as a prophylaxis against fracture through the operative site. Intra-articular femoral head lesions may require dislocation of the hip, with attendant risks to the vascular supply. Hospital stay usually exceeds 4 days,5 whereas our patients were discharged within 12 hours. Lower-limb lesions treated by surgical resection often require prolonged periods of protected weight-bearing. Our protocol allowed immediate weight-bearing without restriction.

Failure to locate the lesion at open excision is a well recognised complication,13 but with precise CT-guided localisation of the nidus during RFA, incorrect targeting is much less likely to occur.

Another treatment is CT-controlled laser photocoagulation, which has been reported to give good results, but it requires expensive equipment14 and complicated logistics. CT-guided percutaneous drilling using a large-bore drill has also been described.15 This requires protected weight-bearing after operation. One series reported a complication rate of 24%, including two patients with femoral neck fractures and one with osteomyelitis.15 We have not encountered any postoperative complications to date, and this result concurs with those of other studies.5-9

Histological confirmation of the diagnosis was attempted on all our patients and yielded a firm diagnosis in 41% of patients, a rate higher than obtained by Vanderschueren et al (36%),7 but less than with wide-bore drilling (74%).15 The chief differential diagnosis is subacute osteomyelitis, although we have also found that stress reactions with cyst formation produce similar radiological features. We concur with McGrath et al3 that these lesions can be distinguished from osteoid osteoma preoperatively by performing dynamic contrast CT imaging. As 23 of our 24 patients had a successful outcome, we conclude that failure to provide a tissue diagnosis in every case is not a drawback significant enough to change our practice.

In conclusion, we believe that percutaneous RFA is a safe and efficacious treatment for osteoid osteoma with significant advantages over surgical excision. For this reason we feel that RFA, with appropriate counselling regarding the risks of recurrence, especially in patients with larger lesions, is the treatment of choice for appendicular osteoid osteomas.

1 Osteoid osteoma in midshaft of femur 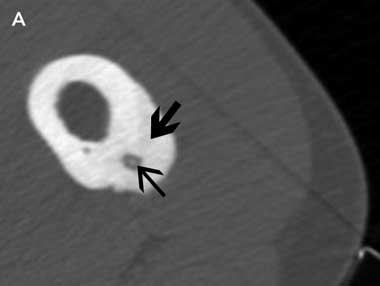 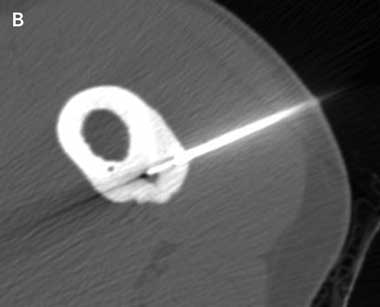