A 31-year-old woman presented with a tender left axillary mass. There was no history of concurrent fevers, sweats or recent illness. She was born in Australia and had not travelled overseas recently. Examination showed a left axillary mass measuring 5 cm in diameter. There was no other lymphadenopathy, no hepatosplenomegaly, nor any breast masses. Aspiration produced 10 mL of purulent fluid. Polymorphs were seen on microscopy but no Mycobacterium spp or other organisms were grown on culture. Histological sections of an excisional biopsy showed nodules of epithelioid histiocytes and giant cells with central necrosis in fibrous stroma, consistent with necrotic granulomatous lymphadenitis (Box, A).

The woman’s symptoms resolved, but the mass re-accumulated after 2 years. An autoimmune process was presumed. As the mass resolved with a trial of prednisone 25 mg daily followed by methotrexate 12.5 mg per week (as a steroid-sparing agent), no further biopsy was undertaken.

After 6 months of methotrexate treatment the mass recurred. Histological sections from a repeat excisional biopsy revealed the fibrous capsule of a hydatid cyst and multiple scolices. The capsule contained a patchy mixed inflammatory infiltrate and granulomatous reaction with giant cells (Box, B). Hydatid serological testing (by indirect haemagglutination) was positive at a titre of 1 : 640. The presumed exposure was from time spent about 25 years earlier on a farm in rural New South Wales where offal was fed to working dogs.

Three months after commencement of albendazole therapy, the lesion was significantly reduced in size.1 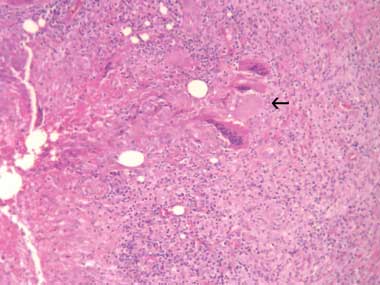 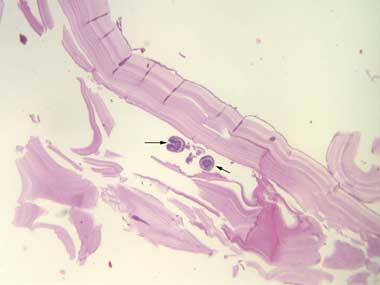 We would like to thank Dr Chris Chow, Department of Histology, Liverpool Hospital, for his assistance in obtaining the histopathological slides for our case.