Acute generalised exanthematous pustulosis (AGEP) is a clinical reaction pattern that is induced, in over 90% of cases, by systemic drugs (most frequently antibacterial drugs). This is the first reported case of AGEP caused by the herbal remedy Ginkgo biloba.

A 45-year-old man developed a symmetrical maculopapular eruption on his limbs. Within 2 days, the rash generalised to involve the face. Disseminated non-follicular small pustules on erythematous skin were predominant (Box 1). The palms, soles and mucous membranes were spared. His body temperature was 38.8°C.

The rash had developed 48 hours after starting oral Ginkgo biloba treatment for tinnitus (Ginkgo biloba was the only ingredient listed on the medication). The patient denied previously taking Ginkgo biloba and was not on any other medication. He reported no previous adverse drug reactions and no history of psoriasis.

The rash cleared within 10 days after withdrawal of Ginkgo biloba. The patient refused a follow-up cutaneous patch test.

Acute generalised exanthematous pustulosis (AGEP) is considered to be a clinical reaction pattern, induced, in over 90% of cases, by systemic drugs. It is a rare presentation of an adverse drug reaction most frequently triggered by antibacterial drugs. AGEP can be difficult to distinguish from other pustular dermatoses. To my knowledge, this is the first reported case of AGEP caused by the herbal remedy Ginkgo biloba.

Ginkgo fruits and seeds have been used in traditional Chinese medicine for millennia, mostly to treat asthma and chilblains. The flavonoids and terpene lactones from the ginkgo leaf, which today is used for medicinal purposes, are associated with diverse pharmacological actions. In clinical practice, ginkgo is mostly used to treat memory impairment,1,2 dementia,3 tinnitus4 and intermittent claudication.5 In some European countries, ginkgo is registered for these indications; in the United States, it is marketed as a dietary supplement. In-vitro and in-vivo studies suggest that ginkgo has antioedemic, antihypoxic, antioxidant, metabolic, antiplatelet, haemorrhagic, microcirculatory and free-radical-scavenging actions.6,7

Reported adverse skin reactions to Ginkgo biloba include contact dermatitis and diffuse morbilliform eruption. The primary allergens from the ginkgo leaf appear to be ginkgolic acids. Ginkgolic acid molecules have similar side-chains to the catechols of the poison ivy group and are suspected of displaying some cross-allergenicity.8 Allergic contact dermatitis to the Rhus antigen present in the ginkgo fruit seeds has been extensively documented.8,9 This raises the question of whether or not ginkgolic acids could evoke a systemic reaction if taken orally. Systemic contact dermatitis can develop from oral challenge after contact sensitisation with other allergens.10

The criteria for diagnosis of AGEP are defined by the EuroSCAR score.11 Features of the condition include acute onset of small, sterile, non-follicular pustules on erythematous skin beginning in intertriginous areas or on the face; systemic signs, with fever over 38°C (in a typical course, an acute rash appears within 1–2 days and resolves by skin desquamation within 4–10 days after discontinuation of the causative agent); and neutrophilia, in the setting of a consistent histological pattern.11 The patient described here had a classic drug-induced AGEP with typical morphology, course and histology and a validation score of 12 points (the range for definite AGEP is 8–12).11

Ginkgo biloba treatment is commonly recommended by non-medical practitioners. With the rise of complementary and alternative medicine, there may be an increase in frequency and type of adverse reactions to this treatment. 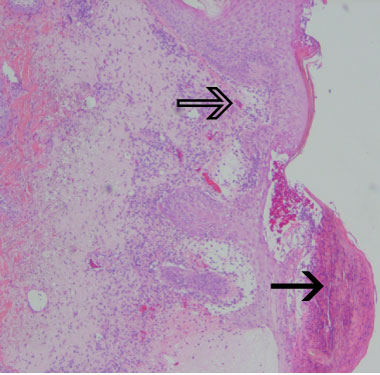 I would like to thank Dr Gael Phillips and Dr Anne Stewart for their assistance with the manuscript.