Use of SMS text messaging to improve outpatient attendance

Main outcome measures: Failure to attend (FTA) rate compared between the group sent a reminder and those who were not.

Conclusions: The observed reduction in failure to attend rate was in line with that found using traditional reminder methods. The ease with which large numbers of messages can be customised and sent by SMS text messaging, along with its availability and comparatively low cost, suggest it may be a suitable means of improving patient attendance.

Patient failure to attend hospital outpatient appointments has a significant impact on the ability of hospitals to provide efficient and effective outpatient services. Not only does a high failure to attend (FTA) rate result in suboptimal utilisation of clinical and administrative staff, it also reduces revenue opportunities and extends the period of time that patients must wait for an appointment booking.

The major reason for failure to attend appears to be patients forgetting their appointments.1,2 Many methods of reminding patients of appointments have been studied in a variety of clinical settings, most commonly letters,3-6 personalised phone calls,1,5-9 automated phone calls4,5 and awareness campaigns.2 Most studies have shown a reduction in FTA rate, regardless of the reminder technique used.10

We assessed the effectiveness of appointment reminders sent as SMS text messages to patients’ mobile telephones as a means of reducing FTA rates at outpatient clinics in our hospital.

The study took place at The Royal Children’s Hospital in Melbourne, Victoria. This 250-bed teaching hospital provides health services to children and adolescents.

The study was approved by the hospital’s outpatient advisory committee and chief executive officer. Approval was not sought from the hospital ethics committee as it was existing and accepted practice in the hospital to contact patients to remind them of future hospital appointments, and patients or their carers had provided contact mobile telephone numbers on registration with the hospital.

All patients who were scheduled to attend these clinics in September 2004 and had provided a contact mobile telephone number were sent an SMS reminder. A historic control group was chosen, comprising all patients who had scheduled appointments in these clinics in the previous month, August 2004, and had a mobile telephone number registered in the hospital’s database.

Information for the reminder messages was extracted from the hospital’s outpatient clinic scheduling system and loaded into a database (Access 2000, Microsoft, Redmond, Wash, USA). A query was then run on the database to select, for each outpatient appointment, the patient’s mobile telephone number, the clinic name and contact telephone number, and the day, date and time of the appointment.

These data were uploaded into the Telstra mobile online SMS business system (Box 1), which inserted them into a standard message template of up to 160 characters. The message was designed to maintain patient confidentiality and did not include information that could link the clinic appointment to the patient.

The SMS system sent a single batch of reminder messages daily to a single mobile telephone number for each patient. If the patient had given more than one mobile number, the message was sent to the preferred number given.

At the end of the month, patient attendance data were extracted from the outpatient scheduling system, and the FTA rate of the patients sent the SMS reminder was compared with that of the historical control group.

FTA rates for individual outpatient clinics are shown in Box 2. Rates were lower for patients sent an SMS reminder than for the control group in all five clinics. The absolute difference in FTA rate ranged from 3 to 27 percentage points, with the total FTA rate falling from 23.4% to 14.2%. This reduction represents 127 outpatient appointments which otherwise would not have been kept.

A two-sample proportion test showed that FTA rates differed significantly between patients sent an SMS reminder and the control group (z = 4.25; P < 0.001). There was no statistically significant difference between the FTA rate for people with and without a mobile telephone contact number in the 3 months before the trial (z = − 0.65; P = 0.52).

Staff time required to send the SMS message was less than 5 minutes per day. This time would be essentially eliminated by a system that automatically generated a message for each appointment made. Cost of the online SMS product is based on the volume of messages sent. If the service provider had charged, cost would have been 25 cents per message, totalling $345.50 for the month.

Our study demonstrated that sending appointment reminders in SMS text message format to the mobile telephones of patients or their carers is an efficient and effective means of improving attendance at outpatient clinic appointments. We found that the FTA rate in our hospital’s out-patient clinics was significantly lower in a group sent an SMS text reminder compared with a similar group not sent a reminder (14.2% v 23.4%).

Other appointment reminder studies using manual and automated telephone calls and posted letters have found reductions in FTA rates ranging from 6% to 19%.1,5,7-9 Our reduction in FTA rate was in line with that observed using these traditional reminder methods, suggesting that SMS messaging is at least the equivalent of these techniques.

Use of SMS technology appears not to have been widely investigated as a means of improving patient attendance at scheduled appointments. A PubMed search identifed two articles that described use of SMS messaging for this purpose,12,13 but no articles examining its effectiveness or comparing it to other reminder techniques. SMS text messaging has the advantage of requiring significantly fewer staff resources. The ease with which large numbers of messages can be customised and sent using this technology, and its availability and low cost, suggest it may be a suitable means of improving patient attendance in a variety of clinical settings.

A limitation of the study was the use of a historical control group, raising the possibility that the observed difference in FTA rates was due to monthly variation. However, in the 12 months before the study, monthly FTA rates in the clinics ranged from 22% to 28%, with the lowest rate observed in February and the highest in December and January. Historically, there is very little difference in FTA rates between August and September. Therefore, it is unlikely that the observed difference was due to monthly variation. Nevertheless, we intend to repeat this study over a longer period to reduce the effect of monthly fluctuations.

In addition, although we were able to identify whether SMS messages were successfully transmitted, we did not know whether they were received by the correct recipients. A major reason for omitting patient details from the message was concern that the mobile telephone contact number might be incorrect or, if correct, that it might not be the patient or carer who received the message. Other authors have identified outdated telephone numbers as a problem for reminder studies.8 Also, we did not monitor the number of patients who telephoned the hospital in response to the reminder message. This would have enabled us to gauge how well the message was understood and its effectiveness in prompting patients to advise of their inability to attend.

SMS text messages have some disadvantages as a means of communicating with patients. For example, use of this emerging technology disadvantages those who do not have a mobile telephone. While the uptake of mobile telephone services in the general community in Australia is very high and rapidly increasing, a proportion of patients will not have access to this technology. Indeed, 36% of our September patients did not give a mobile telephone contact number. Further technological developments that allow SMS text messages to be converted to voice and delivered to landline telephones would greatly improve the reach of this reminder technique.

The economic analysis of SMS text messaging to remind patients of their outpatient appointments is an important area of research which we are currently undertaking. We plan to extend the trial of SMS reminders to all outpatient clinics in our hospital. Other areas of potential research include the use of SMS text messaging to gauge patient satisfaction with clinical services, to remind patients to take or refrain from taking specific drugs, to arrange investigations, and to improve communication with non-English speaking or hearing-impaired patients. 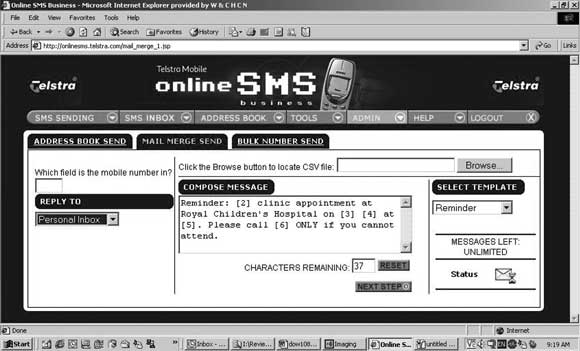 We thank the Telstra Corporation Ltd for providing free SMS messages for the duration of the trial.

Sean Downer and Annette Da Costa own shares in the Telstra Corporation.