Macrophagic myofasciitis is characterised by sheets of macrophages in striated muscle, a few lymphocytes and inconspicuous muscle fibre damage. It is due to aluminium contained in vaccines, and is localised to the inoculation site. We report the first Australian case, detected incidentally when investigating a raised serum creatine kinase level.

During investigations for gastroesophageal reflux, a 32-year-old man was noted to have intermittently raised serum creatine kinase levels: 78 U/L in April 2003, 484 U/L in July 2003 and 8846 U/L in August 2003 (reference range, < 196 U/L), with normal troponin levels. He had no neuromuscular symptoms and played sport regularly. A previous serum creatine kinase level of 2000 U/L had been recorded in April 2000, when he had multiple pulmonary emboli after an overseas trip.

He had been given inactivated hepatitis A (Havrix) and poliomyelitis vaccines intramuscularly in March 2000, and a booster inoculation for hepatitis A in February 2001. He was taking allopurinol for renal calculi and omeprazole for reflux. His father had died from motor neurone disease and a brother had fasciculations. The patient had no evidence of muscle weakness or wasting, no fasciculations, and the remainder of his neurological examination, as well as needle electromyography, was normal.

The interstitial connective tissue of the deltoid muscle contained a dense infiltrate of large macrophages (Figure A). Electron microscopy showed spiculated structures within these macrophages (Figure B). When an electron beam hits a sample it releases x-rays of wavelength specific to the elements in the sample. Using this principle, an EDAX x-ray detector revealed an aluminium peak (Kα, 1.48 keV) from the aggregates. 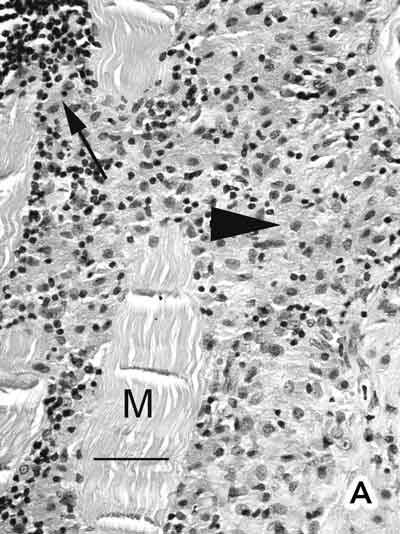 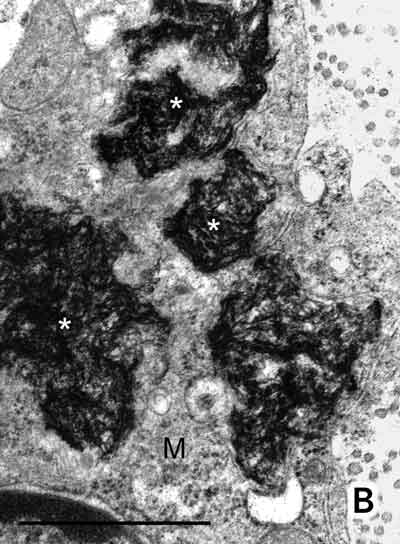 Aluminium is used as an adjuvant in diphtheria – tetanus –pertus sis, some Haemophilus influenzae type b, pneumococcal, hepatitis A and B, anthrax and rabies vaccines, as well as in tetanus toxoid.3 For example, each millilitre of Havrix contains 0.5 mg of aluminium, as aluminium hydroxide. The mechanism of macrophagic myofasciitis is thought to be secondary to an ongoing local immune reaction to the long-term persistence of this aluminium in the muscle.4

Macrophagic myofasciitis commonly occurs in adulthood, although the age ranges between 1 and 70 years.5,6 The clinical picture is variable, and includes nonspecific symptoms such as myalgia, arthralgia, muscle tenderness, muscle weakness, fever and fatigue. A few patients show raised serum creatine kinase levels and myopathic electromyography.6,7 Neurological manifestations resembling multiple sclerosis have been reported in some patients,8 and rarely it is associated with other diseases such as inclusion body myositis.9 Co-existent autoimmune diseases have been recorded in some patients with macrophagic myofasciitis.10 Steroids, analgesics and antibiotics have been used in attempts to treat this condition.10

Our patient did not have any neuromuscular symptoms and the muscle biopsy was performed because of his raised serum creatine kinase level. There was no correlation between macrophagic myofasciitis and the clinical signs and symptoms in this patient, who was asymptomatic. Therefore, we consider this histological finding to be incidental in a patient with a “CKopathy”.

Recently, a genetic predisposition to macrophagic myofasciitis has been suggested to account for the disparity between the low prevalence of this disorder and the widespread use of aluminium-containing vaccines, as well as the variable incidence of this condition in different populations.5

The diagnosis of macrophagic myofasciitis is important to bear in mind, as other diagnoses such as sarcoidosis, connective tissue disease, tuberculosis, Whipple’s disease and malakoplakia may be entertained. The patient could then be subjected to needless further investigations and undue anxiety. We hope this report will help increase awareness of this condition, and predict that more Australian cases will come to light in future deltoid muscle biopsies.