On Monday 21 February 2005, Australian media broadcast news of a mysterious “gas leak” which was blamed for causing breathing problems, dizziness, nausea, headache and vomiting in 57 people in the vicinity of a terminal at Melbourne’s domestic airport. An investigation by Victorian emergency services personnel identified no leak, and the results of air quality tests were unremarkable. The incident disrupted a third of the domestic passenger flights over 2 days and cost a commercial airline company an estimated three million dollars, not to mention the financial burden borne by responding emergency services and government agencies. In response, Victorian Premier Steve Bracks asked Emergency Services Commissioner Bruce Esplin to “investigate and analyse any matters pertinent to a comprehensive understanding of the incident”.1 The Esplin report, issued on 24 March 2005, concluded that the illness cluster was a mystery.1 However, in my opinion, the most obvious diagnosis in the circumstances — mass psychogenic illness — did not receive due consideration.

Unless otherwise noted, the following summary of the events of 21 February 2005 is based on information contained within the Esplin report.

At the domestic terminal

07:12 — the Airport Coordination Centre was notified that a female newsagency employee had collapsed at the base of the escalators in the southern domestic terminal (mezzanine level), a distance of 15 metres from her workplace located in the terminal. The Aviation Rescue and Firefighting (ARFF) service responded and she was transported to hospital by the Metropolitan Ambulance Service (MAS).

The report failed to give a cause for her condition (although witnesses later told a journalist that she “was under stress and hadn’t eaten for hours”).2 It concluded, however, that the incident was “unrelated then and later to the incident that developed”.1 The reasoning for this conclusion was not provided.

08:48 — the Airport Coordination Centre was notified that a second female employee of the same newsagency had collapsed inside the agency. ARFF responders found her to be conscious and breathing.

09:02 — a female American Express counter employee, 15 metres from where the woman involved in the second incident was being treated, collapsed and vomited. (She was the only one of three people working at the counter to fall ill [Andrew Bolt, journalist, personal communication], which was not mentioned in the Esplin report.)

09:05 — the immediate vicinity of the incidents was cordoned off and air sampling undertaken by the ARFF and airport staff for “breathability” and “flammability”. Test results were unremarkable, although the test was considered incapable of detecting any chemical or biological contaminants.1 After testing, the southern terminal’s air-conditioning system was switched to spill mode (ie, air is expelled from the building to the outside) between 09:30 and 09:45, possibly removing any harmful agents that may have been in the facility.1

09:15 — the next person to feel ill was a nearby security guard who had approached MAS personnel while they were treating the American Express employee. He then phoned his union, which alerted and advised that all security guards employed by Group 4 Securitas should be checked by the MAS.

Shortly thereafter, two security guards from the airport departure security screening point — about 600 metres from the earlier collapses — reported feeling ill. The next two airport staff to be “counted” as ill were security guard union members reporting to the MAS, as per union instructions. (This was not made clear in the Esplin report.) The MAS at this point relocated to a position outside the terminal to set up patient triage.

09:55 — two domestic airline staff, whose counter overlooked the area where people first reported feeling unwell, arrived at the triage location, saying that they also felt ill. The ARFF Commander ordered that the southern terminal be evacuated and closed, and the international terminal was cordoned off from the southern terminal. Everyone in the southern terminal was evacuated in an orderly and safe manner to an open air assembly area. MAS personnel were advised to don protective clothing and masks. Around this time, the MAS gave the first of a number of informal media interviews.

13:00 — the MAS advised that it had so far transported 38 people to hospital. Some were believed to be affected by sun exposure in the outdoor triage area.

13:40 — further, more sophisticated, atmospheric sampling was conducted by scientific staff of the Metropolitan Fire Brigade for the presence of volatile organic compounds, and some specific chemicals and chemical warfare agents. The equipment included photoionising detectors (to detect high concentrations of foreign material in the atmosphere) and rapid alarm identification detectors.1 Unfortunately, the Esplin report does not mention the specific agents that these devices were designed to search for. There were no readings to indicate suspected agents, only very minor readings (i) for materials related to aircraft exhaust fumes and (ii) in the proximity of two bins containing seized aerosol cans.

14:00 — a total of 57 people had by now been seen in the triage area: 47 had been transported to hospital, and 10 had refused transportation. Patients were already arriving back at the airport from hospital.

15:00 — the MAS advised that no further casualties had presented to the triage area.

18:20 — state and federal emergency services declared the area safe and the southern terminal was reopened. All of the casualties, except one with pre-existing asthma, were released from hospital the same day, including the very first case. A few reported lingering symptoms for “a number of days”.1

At the international terminal

The Esplin report made only vague mention of a scare among security staff and customs workers in the airport’s international section on the same day. These employees had made three separate emergency calls to the incident controller upon noticing mysterious fumes and feeling sick. However, responding members of the Metropolitan Fire Brigade soon pinpointed the causes of their symptoms: a coat of fresh paint in one incident, new rubber bollards in a second, and dust in a third.2 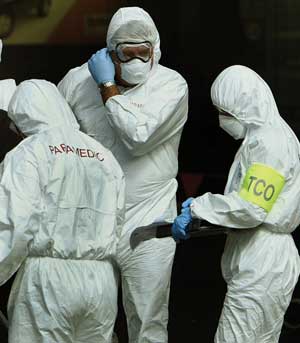 So, what really happened?

In its subsequent investigation, the Esplin report ruled out common exposure to food and water, citing epidemiological studies by the Department of Human Services, and noting that the symptoms experienced “were relatively non-specific and did not correlate closely with any particular illness”.1

Firstly, the outbreak began with a dramatic singular incident (an index case) and was primarily spread by line-of-sight and sound, and later telecommunications. Symptoms were transient and benign, with a rapid onset and recovery, and were consistent with anxiety. There was an absence of clinical or laboratory evidence of organic aetiology and, despite air quality tests and an epidemiological study, no identifiable causative agent. However, I would allow that, given the time differential between illness onset in the index case and the initiation of sophisticated air testing, as well as the early decision to turn the air-conditioning system to spill mode, the possibility cannot be completely excluded that a toxic agent was responsible for making some of the victims ill.

Media reports and witnesses suggested a preponderance of female victims, also characteristic of mass psychogenic illness, although the Esplin report gave no male to female ratio for the casualties. The report did not note that, according to the emergency personnel on the scene, of the 57 “victims” only two or three were passengers. In one instance, a passenger taken to hospital was a woman complaining of a headache — a headache she was later reported to have had ever since she boarded a plane in Coolangatta, Queensland, earlier on the day of the incident.2

Again, consistent with a diagnosis of mass psychogenic illness, the incident escalated once the MAS was advised to don protective clothing and masks — serving to confirm suspicions that there was a serious health threat in the terminal. The report does admit that “loose language” by the MAS and the media — including the words “toxic”, “noxious”, and “chemical”, and remarks that people “were dropping like flies” — were likely to have exacerbated the situation. For example, in one news interview, an ambulance spokesman said that “a lot of people were actively vomiting”.4 Another said that many “became violently ill”, including with “severe vomiting”.5 Despite normal air quality checks and failure to locate a plausible source of a potential contaminant, many media outlets in subsequent days continued to describe the episode as an unidentified chemical or gas leak.6-9 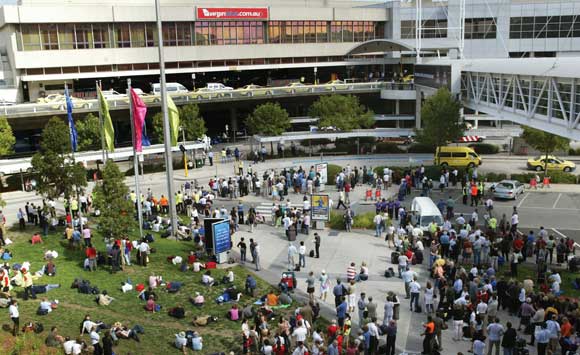 Everyone in the southern terminal was evacuated in an orderly and safe manner to an open air assembly area.

Once it became clear that the victims were returning to the airport from the hospital and were not seriously ill (starting at 14:00), anxiety levels were reduced, and by 15:00 no further illness reports were received. This situation was reinforced when at 18:20 state and federal emergency services declared the area safe. This is consistent with other similar mass psychogenic illness incidents, which rapidly dissipate once the threat is perceived to have passed.10

It is clear from broadcast interviews with victims that many were concerned about the possibility of chemical or biological attack.4,5 Since the terrorist attacks in the United States on 11 September 2001, there has been an escalation in the number of reports of mass psychogenic illness involving the perceived use of chemical or biological agents and, in particular, concern over the targeting of mass transit.11 This may have been the lens through which many airport officials interpreted the initial events. Passengers are transients, but airport staff are “captives” of their work and, hence, may have viewed events differently, engendering greater anxiety.

Given all these factors, it is surprising to me that mass psychogenic illness was not considered by the investigators. The stigma and controversy often surrounding such diagnoses may have been a factor. But, paradoxically, excluding mass psychogenic illness may have inadvertently created public perceptions and fear about a Melbourne Airport “mystery illness” that continues, possibly unnecessarily, to this day.

We live in an age preoccupied with environmental concerns and fear of chemical, biological and other attacks. The Madrid and the recent London train and bus bombings are likely to focus even greater awareness on mass transit as prime terrorist targets, further heightening the potential for similar future episodes of psychogenic illness. Thankfully, thus far, the fear of such incidents has proven more harmful than any real event.12 However, failure to diagnose mass psychogenic illness in the face of what would seem to be compelling evidence, or to at least consider it as a possible explanation, may create unnecessary public unease.

The rapid spread of illness signs and symptoms, for which there is no plausible organic aetiology. Episodes are typified by an anxiety-generating precipitant within the victims’ immediate environment, and symptoms occur within close temporal proximity of exposure to the stimulus.