The explosion in psychiatric neuroimaging research has led to the establishment of stressful and dark neuroimaging laboratories in which young researchers sweat in front of computer monitors performing laborious and tedious imaging analysis. These conditions have contributed to the development of a new psychiatric syndrome, described below.

(a) Work in large institutions;

(b) Have a fixed belief that volume change in a brain structure causes schizophrenia;

(d) Alter their beliefs if their attempts are unsuccessful and begin work on a different brain structure or new method;

(f) Begin to see non-brain images in brain scans on which they are working. 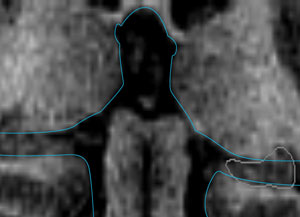 A 38-year-old psychiatrist had spent hundreds of hours tracing hippocampal volumes on MRI scans. He would lock himself in a darkened room, staring at a computer monitor, often listening to ’80s music in an attempt to relieve the mind-numbing tedium of the repetitive tracing behaviour. After tracing scans for 4–5 years, he revealed to his colleagues that he had discovered religious images — in particular, a vision of the Crucifixion (Box).

He was successfully treated with complete tracing abstinence, but has had episodic relapses of his delusional visions, during which he has been heard to cry out “Maybe if I trace a few more it will reach statistical significance”.

In order to ensure that the syndrome was related to the tracing behaviour rather than the music, a further trial was undertaken. Fortunately, re-exposure to ’80s music outside the imaging laboratory did not lead to a relapse in his symptoms.