The 2005 Nobel Prize in Physiology or Medicine

Not so long ago, peptic ulcer disease played havoc with people’s lives. Its sufferers endured chronic and debilitating pain and ran the risk of a life-threatening gastrointestinal haemorrhage or ulcer perforation. Throughout most of the 20th century, the conventional wisdom was that peptic ulcer disease was caused by gastric juice corroding vulnerable mucosa; the dictum “no acid — no ulcer” ruled the day, and neutralisation of gastric acid was the mainstay of management (Box 1). Fixed in this belief, gastroenterologists and surgeons vigorously argued the relative merits of different medications and surgical procedures in reducing gastric secretion, while research addressed the influence of “associated” factors such as social status, smoking and stress on gastric secretion and mucosal resistance. 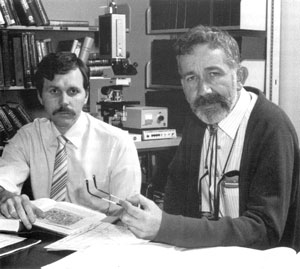 By the turn of the century, all this was relegated to medical history by the groundbreaking research of two Australians, Barry J Marshall and J Robin Warren. They scuttled the prevailing acid-mucosal model by showing that peptic ulcer disease is an infectious disease caused by Helicobacter pylori. For this research, Marshall and Warren who, “with tenacity and a prepared mind, challenged prevailing dogmas”,1 were awarded the 2005 Nobel Prize for Physiology or Medicine.

The story of their research journey is well known. But its essentials are worth repeating because they illustrate some of the human hallmarks of revolutionary research. These include:

Being, seeing and thinking

As part of the physician training program in the 1980s at Royal Perth Hospital in Western Australia, registrars were encouraged to pursue a research project. In 1981, Marshall found himself in such a position as he commenced a rotation in the hospital’s gastroentero-logy service. His boss, Dr Tom Waters, suggested that he talk to Dr Robin Warren, a pathologist at the hospital, about the mucosal spiral bacteria Warren had observed microscopically in some gastric biopsies. Marshall was intrigued and, on reviewing the endoscopic and clinical details of 25 patients exhibiting these mysterious bacteria, found that they were associated with endoscopic diagnoses of duodenal ulcer (n = 2), gastric ulcer (n = 7), gastritis (n = 12), and erosions and scars (n = 4). But there was no consistent clinical pattern. A literature review revealed that these mucosal organisms had been noted intermittently for at least a hundred years, but there were no clear patholo-gical or clinical patterns.3,4 Marshall and Warren decided to explore the significance of the spiral bacteria by gathering more clinical material and by attempting to culture the organism from gastric mucosa obtained at endoscopy.

Marshall and Warren were at the right place: members of the Royal Perth Hospital gastroenterology service were prepared to provide such specimens and members of the hospital’s microbiology department were willing to freely provide people and resources for the culture quest. It also was the right time. Apart from the happy meeting of an enthusiastic registrar unencumbered by dogma and a more senior person who had an observation waiting to be explored, flexible endoscopy had become a widely used clinical procedure and provided the means to obtain fresh specimens for research. The presence of mucosal gram-negative bacteria (initially thought to be a Campylobacter-like organism3) was soon confirmed, but all attempts at their culture were unsuccessful. On taking stock, in late 1981, Marshall discussed his progress with two senior members of the Royal Perth Hospital gastroenterology service, Tom Waters and Chris Sanderson. The latter, in true Australian (laconic) style, advised: “Barry, you should stop buggerising around and do a proper study!”3

And so, a prospective study of 100 patients, with the investigators blinded, was born, and the next characteristic of revolutionary research satisfied: thinking and addressing what other people presumably had not thought about. Marshall believes his relative inexperience helped him think in an original way about the bugs in the biopsies. “If the dogma is incorrect, it’s better to know nothing about it.” (Marshall, personal communication, October 2005.)

The 100-patient study aimed to pursue the following questions:

Marshall and Warren may not have known it, but their journey to Stockholm had begun.

The attempt to culture the elusive organism proved fruitless until religion entered the saga. The gastric mucosal specimens for culture were treated as routine faecal specimens or throat swabs: if at 48 hours no unusual organisms were seen, the culture plates were discarded. In 1982, the Easter holidays occurred from 9 April (Good Friday) to the end of 12 April (Easter Monday). The busy weekend technicians were preoccupied with an outbreak of methicillin-resistant Staphylococcus aureus in the hospital and presumably did not get around to examining the culture plates on Saturday. On the next working day, Tuesday 13 April, small transparent colonies of H. pylori were present.3 Marshall and Warren now had tangible evidence to advance their research.

The 100-patient study was completed by May 1982 and its outcomes were seminal.3,4 Of the 100 patients who had undergone endoscopy, 65 had gastritis, and there was a strong association between gastritis and the presence of the spiral organism. The latter were found in all patients with duodenal ulcer and 80% of patients with gastric ulcer. In contrast, their presence was rare in patients with non-steroidal drug-related ulcers. The bacteria could be cultured, and were a new genus with features of both Campylobacter and Vibrio species. (They were subsequently shown to be H. pylori, but that is another story.)

Resistance from the medical establishment

In January 1983, to stake their individual legitimacy in the evolving H. pylori story, Warren and Marshall submitted two separate research letters outlining their preliminary data to The Lancet. Publication was delayed, as Robin Fox, an editor at The Lancet, wanted to know why there were two separate letters. These were eventually published in June of that year.5 Locally, an abstract outlining preliminary findings of the 100-patient study was not accepted by the Gastroenterological Society of Australia for presentation at its annual conference (Box 2), and difficulties attended the submission of the definitive paper of the 100-patient study to The Lancet in January 1984. Once again, the journal’s Editor-in-Chief, Ian Munro, was challenged — this time because he was not able to find reviewers who would agree on the importance of the paper. Munro sent Marshall a “temporising letter”, after the first round of review advising Marshall the he believed that The Lancet should publish the paper and that he was trying to find reviewers who would agree with him (Marshall, personal communication, October 2005). The paper was published in June 1984.6 An accompanying editorial noted in classical reserved style: “If the authors’ hypothesis of cause and effect should prove valid this work is very important indeed.”7

At the end of 1982, Marshall had left Royal Perth Hospital and taken up a senior registrar post in general medicine and gastroenterology at the Fremantle Hospital in Western Australia. Again, he was at the right place with the right people. The staff at the hospital were aware of Marshall’s research at Royal Perth Hospital and encouraged him to continue at Fremantle. These included Ian Hislop, head of gastroenterology, David McGechie, a microbiologist with excellent laboratory facilities, and the pathologist, Ross Glancy.

At Fremantle Hospital, Marshall and his colleagues showed that bismuth salts (which had been used to treat gastritis and peptic ulcer disease for many years) killed H. pylori in vitro; and, in clinical studies, that bismuth cleared H. pylori but the infection would recur unless metronidazole was added to the regimen.

Yet during this time, Marshall was frustrated with The Lancet’s seeming procrastinations and his own failure to develop an animal model for the disease. Possibly because of these frustrations, he decided to infect himself with H. pylori. He asked Hislop to perform a gastric biopsy on him and then ingested a pure culture of H. pylori (109 organisms). All was well for 5 days, but then he developed halitosis, morning nausea, and recurrent vomiting of acid-free gastric juice. A gastric biopsy on Day 10 showed severe acute gastritis and many H. pylori (Box 3). The symptoms spontaneously resolved after 14 days, but Marshall’s wife, Adrienne, had had enough and demanded that he immediately commence antibiotics or “be evicted from the household to sleep under a bridge”.3

The Medical Journal of Australia connection

After the 1984 Lancet paper came out, Marshall received a call from the then MJA editor, Alistair Brass. He congratulated Marshall on the Lancet paper, but suggested that, next time he published, it might be closer to home. In a recent interview with the Journal, Marshall noted that he had always planned to submit his initial work to The Lancet, but has no objections to publishing in Australia: “If it has a local flavour I send it to the MJA.” (Marshall, personal communication, October 2005.) And so it came to pass that the account of his self-experimentation8 and observations on the in-vitro sensitivities of H. pylori and further clinical correlates9 were submitted to this Journal and promptly published. In a citation analysis performed by the MJA to celebrate its 90 years of publication, these two articles ranked second and third among the Journal’s 10 most cited articles.10

Marshall and Warren join four other Australian born Nobel Laureates in Physiology or Medicine: Howard Florey for his discovery of penicillin, MacFarlane Burnet and Peter Doherty for immunology, and John Eccles for neurobiology. Marshall and Warren’s achievement is made more extraordinary by the fact that they performed all their ground-breaking work not in well endowed and cloistered medical research institutes, but in the orderly chaos of hospitals. And their attempts to convince medical orthodoxy were not smooth: as noted by their Nobel Prize citation, they challenged prevailing dogmas with “tenacity and a prepared mind”.1 The Helicobacter story, and the journey to this particular Nobel prize, doubtless benefited from great timing, the right people and places, original thinking, serendipity, tenacity and passion. But the outcome is unarguable: Marshall and Warren have irrevocably changed clinical practice and have alleviated much human suffering. 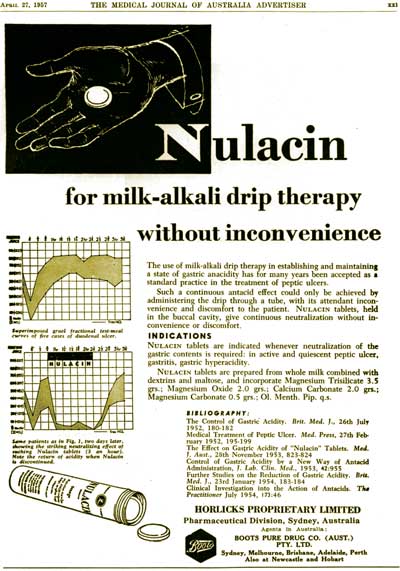 2 Letter from the Gastroenterological Society of Australia* 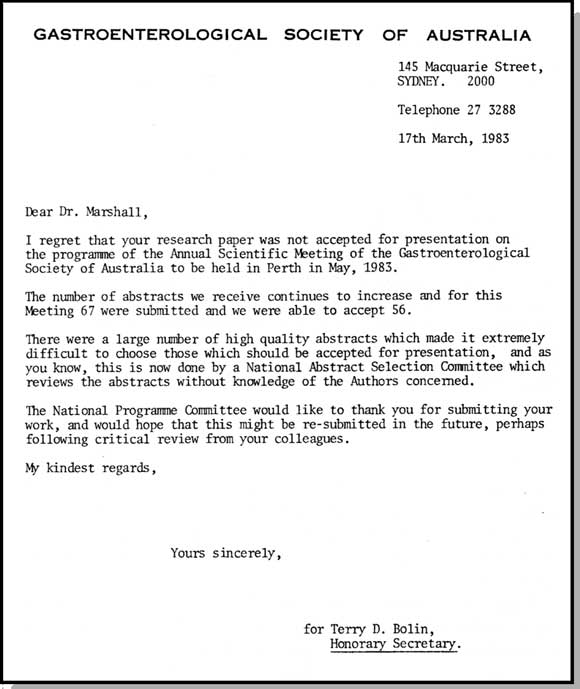 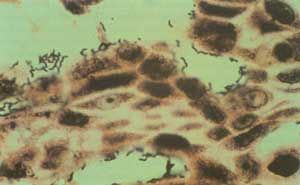 Epithelial cells have rounded up in shape without intracellular mucin, and have many closely adherent black H. pylori organisms. Reproduced from Helicobacter pioneers.3