A 29-year-old Vietnamese woman who had migrated to Australia 5 years previously was referred with a 2-month history of erythematous painful nodules on her thighs and left buttock, the largest of which measured 3 cm × 4 cm. There was no history of recent infections or previous exposure to tuberculosis. She denied any symptoms of inflammatory bowel disease, vasculitis or connective tissue disease. Examination disclosed no abnormalities such as lymphadenopathy, hepatosplenomegaly or synovitis. A chest x-ray was normal. Blood tests showed a total white cell count of 7.3 × 109/L, haemoglobin level of 133 g/L, platelet count of 295 × 109/L and an erythrocyte sedimentation rate of 11 mm/h. No antinuclear antibodies or antineutrophil cytoplasmic antibodies were detected. Liver and thyroid function tests and coagulation studies were all normal.

A working diagnosis of erythema nodosum was made, and the patient was commenced on naproxen. When treatment with naproxen was unsuccessful after 4 weeks, she was commenced on 45 mg (1 mg/kg) of prednisolone daily. As she showed only a partial response to prednisolone, a deep incisional biopsy of a lesion was performed. It revealed a granulomatous lobular panniculitis with necrosis (Box), consistent with erythema induratum (EI). There were no visible mycobacteria or fungi on staining. A subsequent Mantoux test was strongly positive, while a polymerase chain reaction test for Mycobacterium tuberculosis DNA performed on the paraffin-embedded tissue was negative. The patient was commenced on a 6-month course of quadruple antituberculous directly observed therapy, consisting of rifampicin, isoniazid, pyrazinamide and ethambutol, together with pyridoxine, while the prednisolone dose was quickly tapered and ceased. Within 2 months, the cutaneous lesions had resolved, and had not recurred a month after the completion of antituberculous therapy.

The diagnosis of EI could easily have been missed, as the cutaneous lesions were similar to those characteristic of erythema nodosum. In addition, there was a partial response to corticosteroids. A diagnosis of EI is based on cutaneous characteristics, a positive Mantoux test, evidence of tuberculosis and histological findings.2 The diagnosis of EI in this patient was established with three of the four criteria. Furthermore, the patient responded clinically to antituberculous therapy.

The negative polymerase chain reaction (PCR) result is not surprising. In other studies, only 56%–88% of patients previously diagnosed with cutaneous tuberculosis had a positive PCR result using the IS6110 primer.2,3 Schneider et al4 found a positive PCR result in only 5 of 20 patients with EI. Shimizu et al5 failed to isolate Mycobacterium tuberculosis by either culturing cutaneous EI tissue or inoculating the tissue into guinea pigs. The association of EI with tuberculosis is still a matter of debate. Some have considered EI to be a type III or type IV hypersensitivity reaction to M. tuberculosis antigens.6 This may explain the patient’s partial response to corticosteroids.

Histological section of subcutaneous tissue from one of the nodules 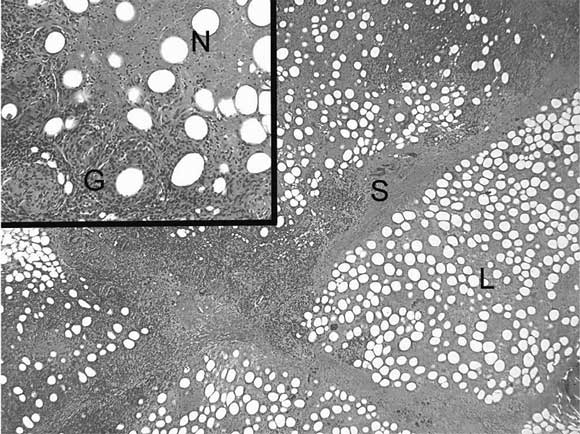