Death from mushroom poisoning in Australia is rare and usually due to liver failure produced by Amanita phalloides. We report a 53-year-old woman in Queensland who died from an acute muscarinic syndrome 10 hours after eating mushrooms belonging to the genus Rubinoboletus. To our knowledge, this is the first death in Australia caused by non-amatoxin-producing mushrooms. It highlights the need for awareness of non-amatoxin-producing mushrooms as potentially lethal.

Reports of significant morbidity or mortality from mushroom ingestion in Australia have predominantly involved the “deathcap” mushroom (Amanita phalloides),1,2 which contains amatoxins that cause hepatic necrosis and often renal failure. Most of these reports have come from Victoria and the Australian Capital Territory.1,3 We report a death in Queensland after mushroom ingestion producing a severe muscarinic syndrome. The mushrooms involved were identified as Rubinoboletus sensu lato pro tempe, from the bolete group, which includes several species known to produce muscarine.

A 53-year-old woman, originally from Switzerland, presented to a community hospital with a 2-hour history of headache, chest and abdominal pain, recurrent vomiting and profuse sweating. Symptoms began suddenly about an hour after she had eaten two large mushrooms which had been collected from bushland near her home and partly cooked. The mushrooms were growing near the base of trees, including both native and introduced species. The woman was previously well, with no significant medical history, and did not take prescribed or alternative medication. Her partner had eaten a small amount of the same mushrooms but rapidly vomited them. He had no toxicological sequelae.

The patient was intubated and ventilated. Fluids were administered (3 L crystalloid and 2.5 L colloid), along with intravenous atropine (2 mg) and an adrenaline infusion. She was transferred to a tertiary hospital intensive care unit for further management.

On arrival at the tertiary hospital, 7 hours after ingesting the mushrooms, she remained in shock, with mean arterial pressure of 40 mmHg and heart rate of 50 bpm. She was treated with high-dose adrenaline and noradrenaline infusions (up to 50 μg/min), further intravenous atropine (12 mg in boluses) and fluid loading (total 3 L colloid), intravenous sodium bicarbonate solution (100 mL, 8.4% solution), metaraminol (total, 20 mg), calcium chloride (200 mg total) and glucagon (6 mg total). Two doses of activated charcoal were given via a nasogastric tube an hour apart (total, 100 g).

Despite maximal doses of inotrope infusions, the heart rate remained at 50 bpm and mean arterial pressure at less than 60 mmHg. Dialysis was begun in an attempt to correct the severe acidosis. However, after about an hour of dialysis and despite ongoing maximal supportive therapy, the patient developed asystole. Resuscitation was ceased 10 hours after mushroom ingestion.

Autopsy was performed at the Queensland Health Scientific Services Forensic Pathology facility. External examination was unremarkable. Internal examination revealed small, bilateral, straw-coloured pleural effusions, bilateral diffuse pulmonary congestion and a small focus of acute pulmonary haemorrhage within the right lung. The liver had a pale cut-surface appearance, and histological examination revealed centrilobular congestion and collections of neutrophils within the sinusoids, but no associated hepatocellular necrosis. No underlying disease or other pathological findings were identified. Toxicological analysis of blood collected post mortem detected midazolam, lignocaine and atropine (used during intensive-care admission before death). Neither alcohol nor α-amanitin was detected.

The patient’s partner provided samples of the remaining uncooked mushrooms, and further similar mushrooms were collected from the bushland for identification. They belonged to the bolete group and were identified in consultation with the Queensland Herbarium as Rubinoboletus sensu lato pro tempe (Box).

To our knowledge, this is the first reported death in Australia from poisoning by a mushroom other than A. phalloides. This patient had many of the classical features of muscarinic poisoning, which is characterised by cholinergic-receptor agonist activity. Features include hypotension, bradycardia, vasodilation, bronchospasm, bronchorrhoea, headache and tremor secondary to the hypotension, excessive salivation, abdominal cramps, vomiting and watery diarrhoea. Urinary incontinence, confusion, miosis and impaired visual accommodation may also occur.4 Some muscarinic compounds have a more histaminic effect, with flushing, hypotension and bronchoconstriction.5

Muscarinic compounds are found in a number of species of mushrooms. These compounds are typically thermostable, with a quaternary configuration, and do not cross the blood–brain barrier. They therefore do not cause direct central neurotoxicity. As muscarine does not contain an ester linkage, it is not metabolised by plasma cholinesterase. Some muscarinic mushroom species produce mild, self-limiting symptoms, while others have severe parasympathomimetic effects, as seen in our patient. Most commonly implicated in severe cases of poisoning are Inocybe and Clitocybe spp.6 Boletus and Rubinoboletus spp. also belong to the group of muscarine-producing fungi, but a search of the English language literature has revealed no previous reports of severe toxicity or death caused by Rubinoboletus spp.

Deaths from muscarinic mushroom poisoning have been reported in Europe, involving Inocybe and Clitocybe spp.5,6 Most were in children with cardiac or pulmonary disease. The lethal dose of muscarine for humans is not precisely known, with estimates ranging from 40 mg to 495 mg (the latter equivalent to 150 g of fresh Inocybe mushroom).2

Boletes, including the Rubinoboletus sp. implicated in this case, form mycorrhizal (symbiotic) relationships with trees, including hardwood species and conifers. Boletes appear similar to the gill fungi (such as the commonly grown Agaricus spp.) in having a cap and stalk. However, unlike the gill fungi, they carry their spores in tubes opening onto the underside of the cap rather than on radial gills. The underside of the cap thus appears covered in tiny pores, hence the common name “fleshy pore fungi”.

Hepatotoxicity and hepatic necrosis are not typical of muscarinic poisoning. In our patient, the postmortem histopathological features of the liver were non-specific. In the absence of hepatocyte necrosis, an acute toxic hepatitis cannot be definitively diagnosed. The changes indicated a reactive process and may have been secondary to hypoperfusion, representing ischaemic injury as a pre-terminal event.

Australian doctors need to be aware that some mushrooms contain substances that cause severe muscarinic symptoms, which may result in severe illness or death. There is little evidence for treatment strategies in mushroom poisoning, and the role of gastric decontamination is unclear. Atropine, a rational antidote, has been used successfully to treat less severe poisonings with muscarine-producing mushrooms.7

Mushroom implicated in a fatal ingestion 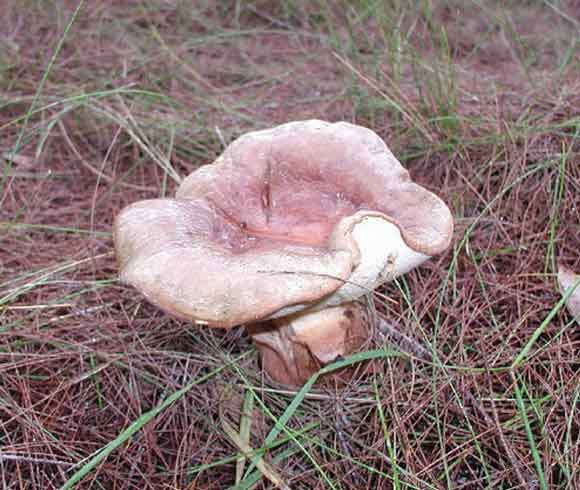 Mushroom (Rubinoboletus sensu lato pro tempe) found at the same place as the ingested mushrooms and identified as similar by the partner of the deceased woman. (Photograph courtesy of Nigel Fechner, Queensland Herbarium, Brisbane, QLD.)