A 6-year-old girl presented to her general practitioner with a red left eye. She reported no pain or irritation, but did have difficulty seeing into the distance with blurring of vision in the affected eye. Associated with this symptom was the onset of neck stiffness with limitation in neck flexion and rotation. This had increased gradually over the preceding month and was most problematic in the morning. There were no associated fevers, rashes, gastrointestinal or genitourinary symptoms.

Examination revealed inflamed palpebral conjunctivae in the left eye, and mild restriction in the range of neck rotation and flexion. There were no other findings.

The patient was diagnosed with conjunctivitis and intermittently prescribed chloramphenicol eye drops over 3 months. The neck discomfort continued over this period, despite physiotherapy. Ultrasonography of the neck showed no abnormalities apart from “unusual lymphadenopathy”. This finding prompted a referral to a paediatric oncologist who believed uveitis should be considered in light of the child’s family history of JIA. She was referred for an ophthalmologist’s opinion.

At ophthalmological review, her vision was 6/7.5 in the right eye and 6/12 in the left eye. There was band keratopathy (see Box 1) present in the region of the visual axis and the pupil was adherent to the lens by posterior synechiae. The child’s vision continued to deteriorate to 6/24 in the left eye despite treatment with topical dexamethasone 0.1% and atropine 1%. She was referred to the rheumatology service.

The rheumatologist found that the child had an elevated erythrocyte sedimentation rate of 43 mm/hour (normal range, 0–20 mm/hour), but the C-reactive protein concentration was within normal limits at 4 mg/L (normal range, 0–10 mg/L). The antinuclear antibody (ANA) titre was strongly positive at over 1:2560, and showed a homogenous pattern. The double-stranded DNA titre (Farr assay) was within normal limits at < 5 U/mL (normal range, < 11 U/mL). The extractable nuclear antigen screen was negative. Treatment with non-steroidal anti-inflammatory drugs resulted in little improvement, so therapy with oral prednisolone and pulse methylprednisolone was commenced.

We saw her when she was admitted for the first of 3 methylprednisolone pulses (625 mg intravenously). Vision in the right eye was 6/9 and in the left it was 6/36. Topical medication was continued and the vision in the left eye improved modestly to 6/24. She was then discharged on topical treatment, and systemic treatment with 2.5 mg methotrexate weekly was commenced. This increased to 7.5 mg weekly over one month.

At the most recent review, conducted at the time of the final dose of intravenous methylprednisolone, the vision was stable at 6/6, the intraocular pressure was within normal limits and the anterior chamber appeared quiet, the band keratopathy had partially resolved, but the posterior synechiae remained. The neck symptoms had resolved.

Uveitis associated with JIA can have an insidious onset, and is often asymptomatic before sight-threatening complications develop. It is an inflammatory condition of the eye, involving the uveal tract,1 and is frequently not seen until a thorough slit lamp examination is performed. Without a slit lamp one may see an inflamed eye with ciliary injection, and the iris may appear adherent to the lens (Box 2).

Anterior uveitis is the most common form of childhood uveitis.2 Anatomically, the inflammation involves the iris and the anterior part of the ciliary body. This form of uveitis is the type most commonly associated with JIA. Less common causes of anterior uveitis include herpetic uveitis, Behçet’s disease and Fuch’s heterochromic iridocyclitis.2 The insidious course and difficulty of diagnosis in preverbal children paves the way for the development of sight-threatening complications. Over time, even low-grade inflammation can lead to cataract, glaucoma, maculopathy and the band keratopathy which was demonstrated in this child. Over 75% of eyes affected by JIA-associated uveitis can develop one or more complications.2

The risk of these complications developing heralds the need to be acutely aware of the signs, and to institute and maintain screening programs for children with JIA. Children with JIA who are at a high risk of developing uveitis, that is, those who have pauciarticular arthritis and a positive titre for antinuclear antibody (ANA) at a young age, need slit lamp examination by an ophthalmologist at 3–4 month intervals. Children with JIA who are assessed to be at a low risk of developing uveitis (ie, those who have a negative ANA titre with systemic disease of more than 4 years duration) should be seen at 12-month intervals.3

The development of uveitis in children with JIA is not uncommon, and a child presenting with unilateral red eye must raise the suspicion of uveitis. However, even in the absence of a red eye, children with JIA may develop ocular inflammation, which, if not detected, can proceed to permanent visual loss. Ophthalmic advice should therefore be sought sooner rather than later.

The left eye of our patient with arrows indicating the band keratopathy found at initial review. 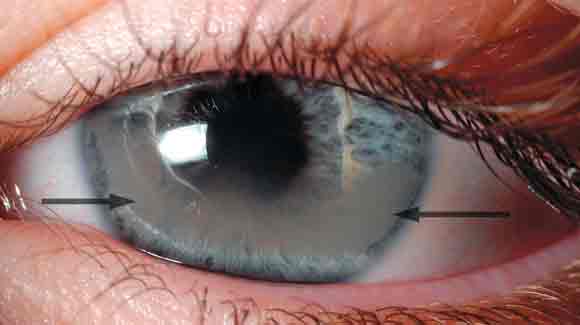 Smaller arrows show areas of the iris adherent to the lens (posterior synechiae).