A recent hospital series reported drug-induced acute interstitial nephritis as the cause of biopsy-proven acute renal failure in 8% of cases, with PPIs accounting for eight of the 14 cases. 2 The diagnosis of acute interstitial nephritis is most common when renal biopsy is performed for unexplained renal impairment, with a reported prevalence in this setting of 27%.10

Although both our patients were treated with corticosteroids, evidence for their use remains anecdotal and is not derived from randomised controlled trials. A recent report of the largest retrospective series published to date found no statistically significant difference in outcome, as determined by serum creatinine level, between patients who received corticosteroid therapy and those who did not at 1, 6 and 12 months after presentation.11

PPIs are now the third most commonly prescribed drug in Australia. Although acute interstitial nephritis is a rare complication, it is a potentially catastrophic cause of acute and chronic renal failure. All medical practitioners need to be aware of this potential class reaction. Early recognition may prevent the development of irreversible renal injury.

1 Serum creatinine level over time after presentation in Patient 1 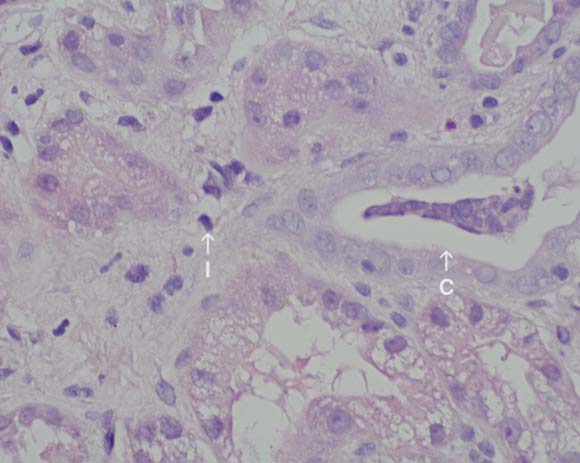