Complete section of pacemaker lead due to subclavian crush

Seven years later, she presented with fatigue and presyncope of 1 week’s duration. She had also noticed contractions of the pectoral muscles on the left side of the chest. An electrocardiogram (Box 1) showed evidence of ventricular undersensing and non-capture, and a chest x-ray (Box 2) revealed complete fracture of the pacemaker lead. The pacemaker was replaced, and a new lead implanted using the cephalic vein cutdown approach.

The patient’s medical record indicated that, 8 months previously, when she developed a cough, a chest x-ray had been performed by her physician. At around the same time, a routine check of the function of her pacemaker indicated that it was functioning normally. Re-examination of the x-ray revealed signs of lead erosion (Box 3) which had gone unnoticed. Thus, despite significant damage to the lead, pacemaker function may be unaffected.

Friction of the lead, most often against the clavicle and the first rib (known as subclavian crush) can damage the lead. The incidence of fracture of pacemaker leads is about 1.0%–2.5% and increases with the age of the lead.1 A way of avoiding this complication is to introduce the lead into the axillary or cephalic vein rather than via subclavian vein puncture.2,3

Routine chest x-rays should be performed to monitor the condition of pacemaker leads, especially where they cross the clavicle. We recommend an annual chest x-ray for pacemaker-dependent patients. This may identify lead damage that may not be apparent during a standard pacemaker check, and thus, potentially, avoid syncope or sudden death. 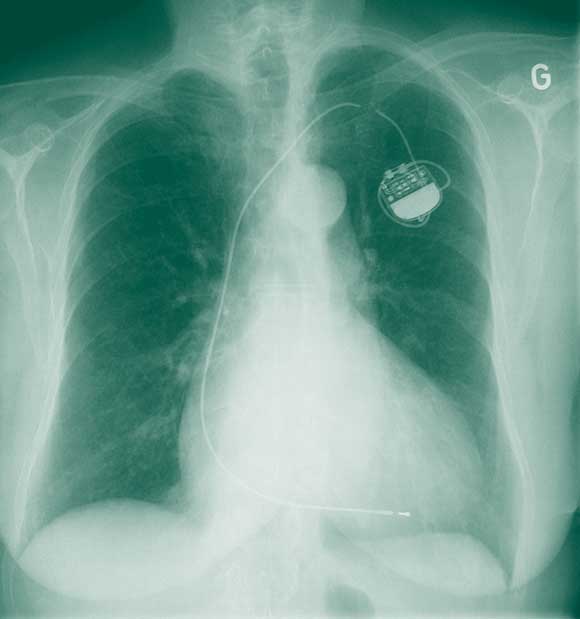