A 22-year-old woman who was 12 weeks pregnant presented to a country hospital with uncontrollable nausea and vomiting. This was initially controlled with antiemetics, but over the next 4 weeks, she continued to vomit five to six times a day. She presented again at 16 weeks’ gestation when the vomiting became more frequent, and also complained of poor visual acuity and diplopia of several days duration. At the time, there was no gait disturbance, no change in mentation, nor any associated headache. At this stage she was admitted and treated with intravenous fluids including glucose.

One week into her admission, her vision deteriorated and she became confused and unsteady on her feet; she was referred to the Royal Melbourne Hospital.

On initial examination in Melbourne, she was normotensive (120/80 mmHg) but drowsy. There was no neck stiffness or rash. She now had a prominent gait ataxia and a corresponding mild lower-limb peripheral neuropathy with absent deep tendon reflexes. Additionally, she had bilateral horizontal nystagmus and poor visual acuity (right, 6/36; left 6/18). There was an associated mild right gaze paresis with intact visual fields on confrontation. There was no pain with eye movements.

The results of fundoscopy are shown (Figure 1).

Her past history was unremarkable. She did not take regular medications, and this was her first pregnancy. Ultrasonography of the fetus and placenta at 17 weeks’ gestation excluded multiple and molar pregnancy. She did not drink or smoke.

Given the new clinical features and her MRI result, a diagnosis of Wernicke’s encephalopathy was made. Thiamine deficiency was suspected to be secondary to hyperemesis gravidarum. Interestingly, her serum thiamine level was only marginally low at 64 nmol/L (normal range, 66–200 nmol/L). Therapy with pyridoxine, folic acid and intravenous thiamine replacement was commenced.

She made a rapid clinical recovery. Visual acuity returned to normal within 3 days and her ataxia, gaze limitation and neuropathy improved. Repeat MRI imaging 7 days later showed moderate resolution of the hyperintensities. Our patient went on to successfully deliver a healthy baby girl at 37 weeks’ gestation.

1 Fundal photographs showing gross papillitis of both the right and left optic discs, respectively. A small retinal haemorrhage is shown in the left eye. 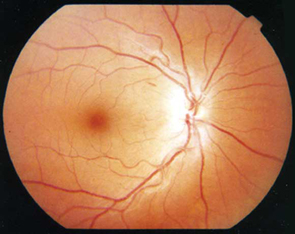 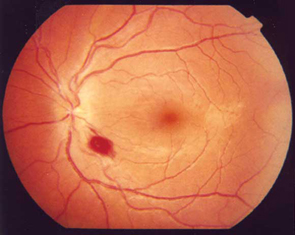 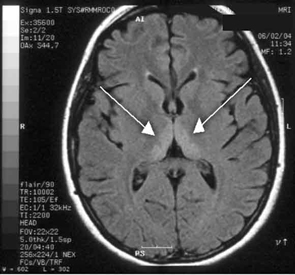 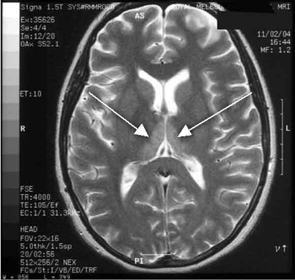 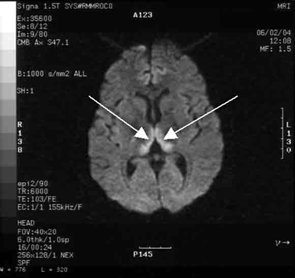 This patient’s rapid response to intravenous thiamine replacement confirms the diagnosis of Wernicke’s encephalopathy secondary to thiamine deficiency. Thiamine, or vitamin B1, plays an important role in carbohydrate metabolism through decarboxylation of alpha-keto acids. Moreover, it also functions as a co-enzyme to the apoenzyme transkelotase in the pentose monophosphate pathway for glucose.1 Low thiamine levels can be associated with poor intake or absorption, increased demand, or poor utilisation.

It is well understood that thiamine requirements are increased in pregnancy, and this is thought to be the result of sequestration of the vitamin by the fetus and placenta.2 With hyperemesis gravidarum, the deficiency is further compounded by the impaired absorption related to the intractable vomiting.3

In some situations, prolonged use of intravenous glucose without thiamine can be a potent precipitant of Wernicke’s encephalopathy.4 This phenomenon is well documented,5 and in our patient, might have contributed to the evolving deficiency. Abnormal liver function test results are also seen in Wernicke’s encephalopathy, and it is possible that hepatic derangement may have also played a pathogenic role in the evolution of our patient’s disease. 6

Our case is unusual in that visual deterioration was the first symptom of an evolving thiamine deficiency. There was a delayed presentation of the classical triad of Wernicke’s encephalopathy — ataxia, mental confusion and ocular gaze problems. Moreover, in our case, MRI scanning was able to detect sensitive neurological changes, raising the suspicion of thiamine deficiency. This information was important in prompt treatment of the condition when clinical signs began to emerge. Indeed there are reports of the usefulness of MRI imaging in diagnosing cases of Wernicke’s encephalopathy.7

Our patient’s vitamin B1 level was only mildly reduced, but this may have been the result of partial correction with food intake while an inpatient at the country hospital. Unfortunately, intracellular thiamine levels could not be measured before replacement. Intracellular thiamine level is usually a more accurate marker of thiamine deficiency, measured as erythrocyte thiamine diphosphate by high pressure liquid chromatography, and is often abnormal in such cases of Wernicke’s encephalopathy, even when the serum thiamine level is normal.

If left untreated, thiamine deficiency can lead to severe neurological, cardiovascular and gastrointestinal sequelae. If not treated, the result is often death. Delayed correction of low thiamine levels may lead to persistent nystagmus, ataxia and poor concentration with multiple tasks.8 For the fetus of an affected mother, slow in-utero development is possible.

Ophthalmic symptoms may include subacute, progressive visual loss, with central field defects and associated poor colour vision. Papillitis can be seen in cases of nutritional optic neuropathy. In severe cases, blindness may occur as a result of complete optic atrophy.9

As thiamine deficiency has severe consequences, we believe that vitamin B1 replacement should be considered in all pregnant women with hyperemesis gravidarum. We further suggest that in such cases MRI imaging may play an important role in early diagnosis.