We report on an elderly couple who presented with a syndrome that included severe generalised tremor and incoordination after eating soup from a damaged can. Black mould contaminating the can was subcultured and the fungus Penicillium crustosum was identified. This fungus usually produces a potent neurotoxin called penitrem A. The couple displayed symptoms consistent with penitrem A ingestion, all of which resolved fully. Penitrem A intoxication has been well documented in animals, but not in humans.

An elderly couple was admitted to hospital after sudden onset of severe muscle tremors. The husband (aged 89) and wife (aged 84) described an uneventful morning. At about 12:00, they had shared a can of soup and toast, followed by chocolate cake, before catching a bus to the local shopping centre. They noticed the soup had a bitter taste, but dismissed the finding because it was a new brand and type to them. There had been no recent changes to their medications, and no recent exposure to garden sprays, insecticides or pesticides.

The man was first to develop symptoms. He reported feeling slightly shaky as the bus arrived at the shops at about 13:00. He had difficulty getting off the bus, his legs felt “wobbly” and he had to sit down. He developed uncontrollable shaking throughout the body, and felt sticky and sweaty. Initial assessment by ambulance officers at about 13:10 was that he had severe muscle tremors and was unable to walk, and that it was difficult to understand his speech. He had no nausea or vomiting, and his abdomen was soft. He was diaphoretic, with blood pressure 160/76 mmHg, pulse rate 80 beats/min, respiratory rate 32 breaths/min, and Glasgow Coma Score 15 out of 15. His oxygen saturation level was 85%, improving to 97% with high-flow oxygen.

Subsequent assessment in hospital at 13:40 revealed that the patient’s Glasgow Coma Score had fallen to 11. Although his speech was incomprehensible, he was able to obey commands; he also displayed generalised weakness and intention tremor. He remained hypertensive and diaphoretic, but was afebrile. He later recounted (to P R L) that he had thought he was going to die. All symptoms, apart from the intention tremor, had subsided by 16:30.

The patient was admitted for observation and investigation. The following day he was lethargic, exhausted, and displayed minimal tremor. He was eventually able to mobilise with the aid of a walking stick, as usual.

The woman had a similar presentation. She complained of feeling dizzy and shaky, but had no nausea or vomiting. Ambulance officers described her as being anxious, diaphoretic, and with uncontrollable shaking. Her blood pressure was not palpable because of severe shaking, but she was well perfused. She was tachycardic (pulse rate, 110 beats/min, taken from electrocardiographic monitoring), with a respiration rate of 20 breaths/min, temperature 36.5ºC, Glasgow Coma Score of 15, and blood glucose level (measured by glucometer) 7.0 mmol/L (RR, 3.5–8.0 mmol/L). Although she was no longer tachycardic on admission to hospital, she remained anxious and diaphoretic, with a generalised tremor that increased with stimuli (eg, being questioned). Her oxygen saturation level on room air remained above 95%. All symptoms, apart from the intention tremor, subsided by 16:30.

A chest x-ray and electrocardiogram were normal. A computed tomography brain scan showed no abnormality apart from a polypoid density in the inferior maxillary sinus.

The results of haematological and biochemical tests were normal, except for urea (9.1 mmol/L; RR, 2.5–6.4 mmol/L) and creatinine (0.13 mmol/L; RR, 0.06–0.12 mmol/L). The level of pseudocholinesterase was within normal limits (18.7 U/mL; RR, 7.0–19.0 U/mL). A urine screen conducted for drugs of abuse (including amphetamines, methamphetamines, benzodiazepines, cocaine, opiates and cannabis) was negative.

The patient was admitted for observation, and gradually improved the following day.

Both patients were discharged 2 days after admission with a very slight residual intention tremor. When assessed by their general practitioner 2 weeks later, the man had only a mild increase in his usual essential tremor and the woman’s tremor had completely resolved.

The damaged soup can was retrieved from the couple’s residence on the day of onset of their illness and sent to Food Science Australia for analysis. Examination of the can revealed a dent in the top adjacent to the ring-pull on the lid. There was black mould inside the can at the top near the damaged area, and a small amount on the underside of the lid (Box 1).

The mould was subcultured onto three different media suitable for growth of common food spoilage moulds.2 The plates were incubated at 25ºC for 4 days. All plates grew a pure culture of a Penicillium species. The mould was then cultured onto identification media, incubated at 5ºC, 25ºC and 37ºC for 7 days and examined again.2 Both microscopic and colony morphology characteristics identified the mould as Penicillium crustosum. It had typical sporing structures for this species (Box 2), and its colonies on malt extract agar shed spore masses in a manner typical of the species. No mycotoxin analyses were attempted.

Penicillium crustosum is a common foodborne fungus that causes spoilage in a wide variety of foods, including meat, cereals, nuts, cheese, eggs, fruit, and processed and refrigerated foods. Almost all P. crustosum isolates produce the mycotoxin penitrem A.1-3 Its potent neurotoxic effects have been demonstrated in various laboratory animals,4,5 and naturally acquired intoxication has been reported in sheep, cattle, horses and domestic dogs.4,6-9 In animals, symptoms include ataxia, tremors and severe muscle fasciculations.4-9 Larger doses may cause seizures, massive liver necrosis and death.5

To our knowledge, there has been only one case documented in humans of a tremorgenic syndrome following ingestion of P. crustosum.10 A man who had ingested about 30 mL of beer from a can contaminated with a fungus later identified as P. crustosum developed tremorgenic syndrome. About 4 hours later, he developed headache, vomiting, diplopia, weakness and bloody diarrhoea. After 12 hours he developed a tremor. All symptoms resolved within 30 hours. In this case, the fungus isolated was found to produce the mycotoxin roquefortine, but penitrem A was not reported. The authors acknowledged that the isolate lacked a feature typical of P. crustosum. As isolates of P. crustosum almost always produce penitrem A, it is quite possible that the mould involved in this mycotoxicosis was not actually P. crustosum, but some other closely related species such as P. roqueforti.11,12

Inhalation of mouldy silage was implicated in a similar tremorgenic illness in a 16-year-old male.13 Malaise, fatigue, headache, pyrexia and vomiting occurred within hours, progressing to coarse fasciculations and tremors. Symptoms had resolved by the 7th day. A variety of fungi were isolated from the silage, including Aspergillus and Penicillium, both of which produce tremorgenic mycotoxins. Aspergillus fumigatus, which is particularly common in silage, can produce tremorgenic toxins known as fumitremorgens, but not penitrem A.14

There are strong similarities between the cases we report here and numerous documented cases of penitrem A intoxication in animals. Domestic dogs are at particular risk when they have access to household waste.6-9 P. crustosum also produces the mycotoxin roquefortine,15 whose neurotoxic effects have been implicated concurrently with those of penitrem A in some cases.7-9 However, roquefortine has been found experimentally to be far less toxic than penitrem A.15

The elderly couple experienced a comparatively rapid onset of symptoms, but had no nausea or vomiting. The differential diagnosis included a reaction [from exposure] to either a food toxin or an environmental pollutant such as a pesticide or insecticide. The canned soup was a common source of exposure, and its unusual taste further implicated the can as the toxin source.

Although we did not attempt to identify the mycotoxin in the cases reported here, isolates of P. crustosum usually produce penitrem A (in one study, of 308 isolates tested, all produced penitrem A12).The highest levels of penitrem A production by P. crustosum isolates occur in liquid media,11 so the soup can in this case would have provided optimal conditions for mycotoxin synthesis. Unfortunately, none of the implicated soup remained for analysis. Most mycotoxins are heat-resistant and comparatively stable,3 so would have survived the mild cooking process. Visual impairment may have contributed to this illness occurring, in that the elderly couple were not aware that the soup can was damaged and discoloured.

Experimentally, penitrem A inoculation has been found to produce a tremorgenic syndrome that leads to convulsions and death when larger doses are given.4,5 Administration of pentobarbitone has been found to be effective in controlling muscle tremors and seizures in animals.7,8

This case study highlights the need to avoid ingesting food from damaged cans. Medical and food-authority personnel should be aware of the possibility of P. crustosum ingestion and its potent neurotoxic effects. Limited reporting of this syndrome in humans suggests that it is either rare or under-reported. 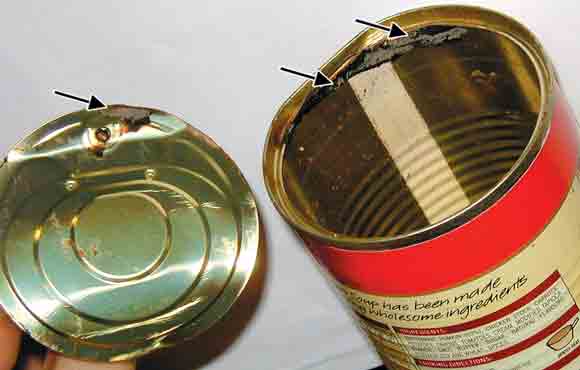 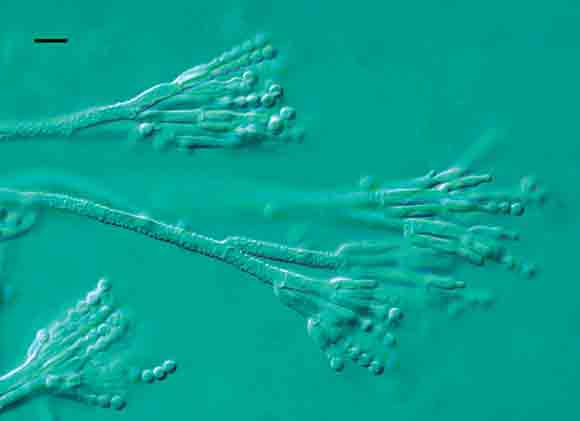