Winning Essay: Fish traps — a significant part of our health and wellbeing

Indigenous health
In the beginning . . .

Once upon a time, there was a buzz of excitement and talk that echoed through the streets and homes of Darwin. This frenzied movement of people indicated that the fish trap hunters had returned! Bush telegraph was alive and well during those times. As a result, a gathering would culminate at a well known residence and then the bartering, haggling, and negotiations would begin! The reason: fresh fish, crabs, the odd prawns and other marine edibles were on sale. The women mainly controlled this part, for they were the bargain hunters and could square a deal even with the sweetest-talking miser. Women played a significant role in the fish trap business. This was the life of good old Darwin. It was the time when fish traps were operated by local people, for local people, and when money was scarce. Money is still scarce today, but the fish traps are no longer. The government told us “they are illegal”. “They are an eyesore”, “hazardous to other fishing craft”, and “impact on the crab and barramundi industry” were other comments made in opposition to the fish trap. We asked ourselves, is it because “they” have determined that fish traps impact on “their” business?

. . . nothing in . . . this Act . . . shall limit the right of Aboriginals who have traditionally used the resources of an area of land or water in a traditional manner from continuing to use those resources in that area in that manner. 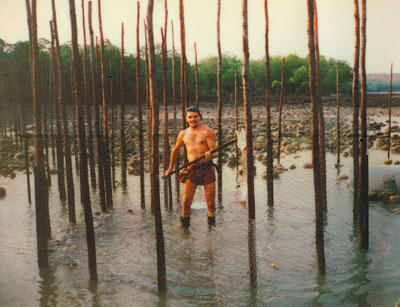 Fish traps were made using natural resources from the land. As changing times caught up with us, other materials were used. Hence, chicken-wire became the substitute for bush string, which was used to reinforce and strengthen the trap.

The chicken-wire also kept the poles together, which were straight sticks sourced from a certain tree in the bush. They were cut down with an axe to form a point for spearing into the mud. The design of the trap and the nature of its use have always been the same. A tradition, custom, cultural business, call it what you will, but this way of fishing has been used for centuries and passed down and taught to generations. The “masters” of the fish trap business have since all but passed on, although there are a couple of apprentices of the masters who can still construct and manage this age-old custom.

The fish trap builders were trained and taught the same way any person would undertake an apprenticeship, except the difference is that this would last a lifetime. New learnings and adaptations in this trade were continuous and would arise at any time. Why? Because we were utilising nature and, as we know, nature is always evolving and ever-changing — it never stagnates. The fish trap business has always been a dangerous and hazardous activity with hard, hot labour — but this was expected and therefore accepted. However, this wasn’t anywhere near the hardships we later encountered with introduced biased coastal development and fishing control mechanisms.

These traps were strategically placed within coastal foreshores surrounding Darwin well before the government’s narrow-minded regulations were introduced.

Damage to the environs of coastal mangrove estuaries and in open sea waters was virtually nil. While commercial fishing is a major source in the seafood industry, how often do we hear of discarded netting and other debris in our seas that become fatal traps for a variety of unsuspecting sea creatures? Couple this with fuel emission and oil spillages from a flotilla of commercial sea operators, and the fish trap business is, by contrast, right at the lowest end of the scale as far as impact on the marine environment is concerned.

One of our main threats was crocodiles, as they too were fish-eaters. But they had challenging opposition in the form of “the true local fisherman”. We were in crocodile country, and they were in our country (from a cultural aspect), so there was an element of respect, despite the opposition. We both wanted the same thing — fish. We were both dangerous to one another, but the smartest and wisest would win the day. Thank the stars, and touch wood — the local fisherman is still the victor today!

The trap would have to be serviced at every low tide, with the fish taken out of the trap caught from the previous high tide. This meant clearing the trap at night and during the early hours of the morning. Tiredness was not an excuse, nor was it acceptable. You needed to be instantly alert, extremely aware, and know your capabilities and boundaries. The more remote the fish trap location, the more crocodiles there were hanging around the trap, waiting for an easy meal. At night we would be equipped with torches and riding shotgun. If the crocodiles were too close we would fire a shot in front of them, splattering mud on to them in a bid to scare them away to keep them at a safer distance. While the distance may have been only a stone’s throw away, we were able to work swiftly enough to clear the trap, with quick glances now and again to see where they were. They seemed to cheekily edge that little bit closer every time we would turn our backs. A bit like the game we played at school, except these guys weren’t playing! But as long as we could see them we were okay. The crocodile you can’t see is the most dangerous one, which is why alertness needed to be one of our strongest senses. 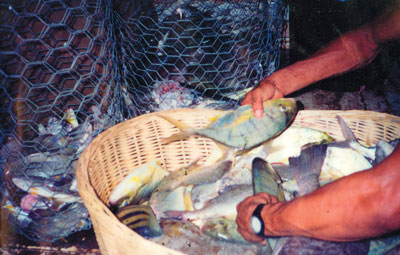 I guess our greatest fear was that certain kind of man. This particular species had no respect. He would tie his boat up to one of the protruding poles affixed to the trap at high tide, drop his baited line down into the trap and catch all our fish! When we would go out to clear the trap at low tide, we would find strands of line, hooks and sinkers tangled up in the trap and hardly any fish. “This one” is much craftier than any crocodile. One good thing I guess is that “he” could never get to the crabs sitting on the bottom of the trap. If the trap was raided and there wasn’t the catch we were expecting, we would have to forage around in the mangroves for a variety of shellfish and the odd crab or two. We never failed to come back with a feed.

Fish, crabs, prawns, a variety of shellfish and other inland bush tucker were being consumed on a regular basis. Without realising it at the time, we had a rather healthy lifestyle. Routinely clearing the trap, along with some maintenance, ensured a regular exercise regime, plus some of these foods consumed had medicinal qualities.

Thus it is to this diet (traditional hunter-gatherer) and life style that we should turn when seeking explanations for (and solutions to) the characteristic pattern of chronic disease which emerges in all populations when they become more affluent economically and adopt a sedentary, westernized way of life.2

Today . . . unfortunately, and sadly, many of our people are suffering from an increase in a variety of chronic conditions ranging from cancers, diabetes, heart disease and stroke to other debilitating illnesses — associated with poor diet, reduced activities and exercise, and other unhealthy lifestyle habits.

More effort and a greater level of importance needs to be directed towards strategies in practical and inexpensive prevention. There is nothing wrong with some of the old and a little bit of the new. Reconciliation comes in many forms, but basically it is about bringing together, compromise, resolution and understanding. Shaking hands and saying sorry is surface stuff. Examples of partnerships that work are more real.

As a young boy growing up in Darwin, it was quite rare to see someone in a wheelchair. I remember an uncle having one leg, but he lost it as a serviceman in the war. He walked with his wooden leg and also played tricks on us as kids. Multiple amputations because of diabetes were virtually unheard of in the old days. Why was this? Could it be because of the diet back then, together with an abundance and sustainment of activities, such as sport, hunting, fishing and other regular recreational events?

Australian Aborigines develop a high frequency of type-2 diabetes when they make the transition from a traditional to an urban life-style.3

If we were to turn back the clock, or gather data from yesterday, the answer or solution to many of today’s chronic ailments may lie in waiting. 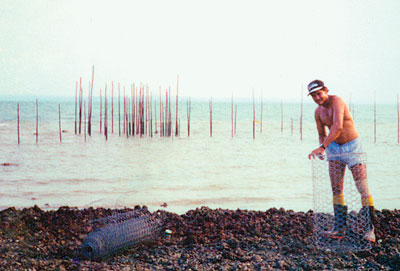 Today we have an increasing trend towards youth dysfunction associated with crime, violence, suicide and other associated factors. Is this linked to varying forms of mental illness associated with limited family connectedness, negative peer group pressure, or some early childhood abuse or neglect? Maybe it’s the hyperactivity of the “neon world” which attracts and lures them like moths to bright lights. This may momentarily help blanket out or blur the vision of a fragmented childhood, but they still have to wake up the next day. Development, tourism, a fast pace, and a “keeping up with the rest” attitude can leave a drastic legacy in its wake. If you can’t keep up or don’t fit in, you get left behind and easily forgotten. So how can we create and foster a healthier lifestyle for a healthier next generation? Our children and young people need adventure, excitement, nurturing and opportunity in all the right ways. Until such time as someone comes up with real activities for excitement-starved youth, they will be encouraged and persuaded to seek other good things in the neon world . . . but at an unhealthy price! Things like drugs, alcohol, adolescent pregnancy, aggressiveness and, eventually, low self-esteem are the result.

Gather up all youths who work for the dole or who are on a community development employment program and ask those wanting to mow lawns, pick up rubbish, do sweeping, hedging, etc, to move to the left. Then ask those wanting to fish and learn about Indigenous coastal and land management practices, including Indigenous health and wellbeing, to move to the right. What would you pick?

The fish trap business will create a feeling of achievement, pride, identity, a sense of belonging and something a bit more significant as far as contributing to community health and wellbeing is concerned.

Nutritionists and doctors tell us today to eat at least two fish meals a week to prevent chronic conditions such as heart disease, stroke, some cancers, and type 2 diabetes. Regular exercise, other good dietary products (eg, fruits and vegies) and limited use of unhealthy substances (smokes, alcohol, other drugs, etc) increase our chances of living a longer and healthier life.

It is almost as if we are being told by the new-age researchers about something we may have known all along, but yet had no control over sustaining it! Today there is a national focus on obesity, unhealthy diet, substance misuse, etc, which leads to a range of chronic illnesses, almost as if it is groundbreaking news! Well, maybe for the young, but not for many middle-aged and elderly people who once had and practised healthy lifestyles — but had them disrupted in some way.

The commercial fishing industry, tourist development and infrastructure, a massive gas pipeline project, mining, pollution and pumping effluent into our waterways and coastal areas have made hunting and gathering of fish and other marine edibles much harder. However, there are still some small pockets of undisturbed areas where we can resurrect some healthy traditional practices of yesterday. I am hoping that these delicate areas can remain undisturbed and protected from development.