A 31-year-old Indigenous man from a remote Cape York community was referred for investigation of weight loss from 57 kg to 36 kg over the previous 3 years. He drank alcohol heavily and had had seizures which were probably related to this alcohol use. He had diffuse crusted scabies and there was obvious wasting.

Despite a high-protein and high-calorie diet, on Day 13 of his admission his weight was 34.4 kg. Small bowel biopsies taken at upper gastrointestinal endoscopy showed partial villous atrophy and a significant increase in inflammatory cells within the lamina propria. The endoscopic findings suggested tropical sprue, and prompted commencement of doxycycline and folate therapy. His weight improved immediately, and on discharge 10 days later he weighed 38.5 kg.

Ten weeks after discharge, despite continuing to misuse alcohol, he had gained 7.6 kg. His albumin level had increased to 33 g/L and the prothrombin time was 11 seconds. His haemoglobin level was 136 g/L, and white cell and eosinophil counts were normal. 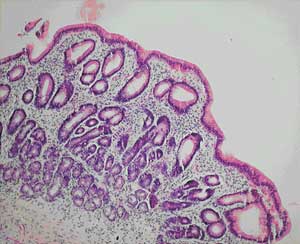 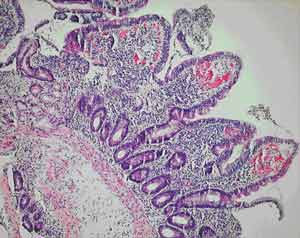 A 62-year-old Indigenous man from a community near Cairns presented for investigation of weight loss, diarrhoea and macrocytic anaemia. He drank alcohol heavily and weighed only 39.5 kg.

His potassium level was 2.3 mmol/L (NR, 3.4–4.5 mmol/L) and creatinine clearance was normal. His albumin level was 30 g/L, but other liver function test results were normal. Thyroid function was normal. Upper gastrointestinal endoscopy and biopsy performed on Day 13 of admission showed partial villous atrophy and increased inflammatory cells in the lamina propria (Figure 1).

Therapy with doxycycline and folic acid was begun on Day 17 of admission.

Follow-up endoscopy and biopsy 24 days after commencing this therapy showed a persistent inflammatory exudate, but an improvement in the villous appearance (Figure 2). By discharge, his haematological and biochemical test results were normal, his diarrhoea had stopped and his weight had improved to 47.3 kg.

A 66-year-old Indigenous man from a community near Cairns was referred for investigation of diarrhoea and weight loss. He had previously had a hemicolectomy for diverticular disease. He had lost 15 kg over 3 months and was having significant diarrhoea. In the week before referral he had shortness of breath on minimal exertion. On examination, he weighed 42 kg and was emaciated.

Stool microscopy showed no white or red cells, ova, cysts or parasites, and no bacterial pathogens.

Upper gastrointestinal biopsy performed on Day 4 of admission showed atrophic villi and an inflammatory infiltrate in the lamina propria.

Vitamin B12 and folate supplementation were commenced on the day of admission and doxycycline therapy on Day 7. In the first week of antibiotic therapy, he gained 3 kg and his diarrhoea stopped. His white cell and platelet count became normal and haemoglobin level improved to 79 g/L. His biochemical test results normalised entirely. He was discharged home on Day 12 and booked for repeat endoscopy, but did not return.

The clinical presentation, histological findings and response to tetracycline and folate therapy in our patients, seen at Cairns Base Hospital between 1998 and 2004, support a diagnosis of tropical sprue. To our knowledge, these are the first reported cases in Australia.

All of our patients were Indigenous patients living in remote Indigenous communities. The alcohol use by the first patient clouds the picture, as high alcohol intake is associated with nutritional deficiencies. However, the partial villous atrophy on biopsy is more suggestive of tropical sprue. Additionally, despite being in hospital and not drinking alcohol for 2 weeks, there was no response in his weight or biochemical test results until therapy for tropical sprue commenced. Finally, his weight gain and improvement in biochemical test parameters continued despite ongoing alcohol misuse on discharge.

Seeing resolution of the histological changes in all the patients as they responded to treatment would have been desirable, but their remote location and the fact that two did not attend for follow-up made this difficult. It would also have been interesting to examine the small bowel flora of the patients, but this was not prospectively considered.

The absence of an agreed definition for tropical sprue has created difficulties. It has been noted that many asymptomatic people living in the tropics will have subclinical malabsorption and even abnormal small bowel biopsy results when rigorously assessed. Uncertainty in the diagnosis of tropical sprue is compounded by the condition’s incompletely understood aetiology. It is proposed that gastrointestinal infections, which occur at a higher rate in the tropics, cause mucosal injury and initiate the process. The mucosal injury leads to a disturbance in intestinal motility, allowing the overgrowth of coliform bacteria in the small bowel.1,2 Enterotoxins from these bacteria potentiate the mucosal damage which leads to malabsorption and protein loss. The resulting nutritional deficiencies hinder epithelial recovery, and a vicious circle develops. Alteration in the intestinal microflora may also lead to a change in toll-like receptor signalling and further retardation of intestinal healing.3

It seems likely that tropical sprue is not a single disease, but rather a pathophysiological process with heterogeneous manifestations resulting from subtle differences in the interplay of the initiating infection and the patient’s diet, living standards and genetics.4 A milder form of the process may lead to asymptomatic abnormalities — sometimes referred to as tropical enteropathy — while more severe expression may lead to the classical debilitating tropical sprue syndrome. The nature and the extent of the nutritional deficiencies are likely to be related to the duration of the disease and the extent of bowel involved.

Admission rates for gastroenteritis in Australia are nearly seven times higher in Indigenous communities than in non-Indigenous communities. Rates are also higher in regional and remote areas than in urban settings.5 Our own analysis of hospital separation data from Queensland’s northern zone for 1996–2001 shows an age-standardised hospital separation rate for gastrointestinal infection 2.32 times higher for Indigenous patients than non-Indigenous patients (95% CI, 2.17–2.48).

A number of studies of chronic diarrhoea in Indigenous Australian children have documented partial villous atrophy on small bowel biopsy.6,7 Higher colony counts and more frequent isolation of gram-negative organisms are found in duodenal aspirates from Indigenous children with chronic diarrhoea.8 Some of these studies noted a similarity with contemporary Indian studies of tropical sprue, but therapy with antibiotics and folate does not seem to have been considered in the Indigenous children.

Our anatomical pathology service believes that small-bowel biopsies from Indigenous patients from remote communities do show a subtle increase in inflammatory cells (Dr M Jagusch, Anatomical Pathology Department, Cairns Base Hospital, personal communication), perhaps representing the subclinical tropical enteropathy described above. The relatively high incidence of gastrointestinal infections in these Indigenous communities may explain these histological findings and, by initiating the pathological process, may predispose these populations to tropical sprue.

Dramatic presentations like those we describe are uncommon, but doctors working with remote Indigenous populations frequently encounter patients with evidence of milder nutritional deficiency. While there are many factors to consider in the assessment of poor nutrition in this population, and tropical sprue is a diagnosis of exclusion, the availability of a cheap, safe and rapidly effective treatment mandates that the diagnosis be considered in the appropriate clinical situation.

I acknowledge the advice of Dr C Hadfield, Dr P Marshall, Dr C Boutlis and Professor M Gracey in preparing this manuscript. I also thank Brad McCulloch and Fiona Tulip at the Tropical Public Health Unit in Cairns for statistical analysis and advice.