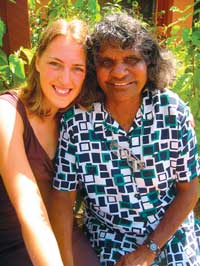 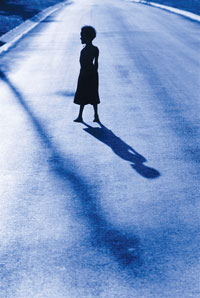 Crossing the line is a 1-hour video that charts the paths of two Tasmanian medical students, Amy and Paul, during an 8-week placement on Mornington Island in north-west Queensland. Kaye Harrison wrote, directed and co-produced the video for ABC-TV, which screened it earlier this year in two parts on the Indigenous program Message stick.

Amy and Paul come across as delightful young people. They are affluent and idealistic. After a week’s briefing in Mt Isa, the flight to Mornington Island teleports them to another world, where the health and social needs of the Indigen-ous people are vast and often unmet. Eight short weeks is all they have, and their instructors have urged them to maintain their professional stance and distance, and not to “cross the line”. The video examines whether this advice is realistic and how adequately prepared they are for this culturally shocking experience.

After arriving at the Mornington Island Community Hospital, life expands for the two students. They cannot avoid the experiences of the people served by the hospital. After several weeks, Paul encounters a young girl who is brandishing a rope, threatening suicide. He intervenes. Should he? His local Aboriginal mentor explains how her son shot himself and how important she considers early intervention to be. The Mt Isa supervisors, in their weekly tele-conference with Amy and Paul, perceive that Paul has crossed the line and that suicide is an issue he should not touch on. He is further criticised for interviewing community members without a health professional being present to supervise him and without ethical clearance. One supervisor cautions Paul against “building up an expectation that you’re going to make a change”.

Amy attends a church service at a time when many funerals are being held for young men. She weeps with the people, wrestling with the meaning of her Christian faith as she listens to stories of missionaries who removed children from their families and disciplined the people. The folk of Mornington Island demonstrate a warm-hearted resilience in the face of their history, but to Amy it is appalling.

Without seeming to consult the community, Paul and Amy’s supervisors in Mt Isa pull them out for debriefing a week early — almost before they can say goodbye to the people they have come to know and begun to love — because they have become too involved.

Two Aboriginal colleagues watched the video. They despaired at the “offensive” lack of attention given to the community’s wishes and at what they perceived to be an element of voyeurism in the placements themselves.

Australia remains stuck in a trench in relation to Aboriginal health. The spent cartridges of bright ideas litter the ground. There is a need for new thinking. Certainly it must be born of Aboriginal culture. It would address reculturation and the rejuvenation of Aboriginal identities. Given the emphasis on social capital, mutuality and reciprocity in Aboriginal culture, building on that may be the way forward.

Awakening the minds and sensitivities of future doctors to the needs and wishes of Aboriginal people makes sense if there is to be participation of each in the other’s future. If medical students are to “go in at the deep end at the Top End”, there needs to be strong support from a partnership of medical educators and the communities involved.

We believe that educating students of all disciplines relevant to Aboriginal people is part of our obligation to improve the way we respond to and interact with Aboriginal people in the future. Crossing the line should remind medical educators to harness, rather than suppress, the welling energies of youth to cross the line. At the same time, for Aboriginal communities to cross the line puts their cultural identity at risk. Better ways than those shown in this video would combine the wisdom of the elders with the idealistic energies of youth.