Visceral leishmaniasis: a trip to the Greek Islands is not always idyllic

An 18-year-old man of Greek parentage presented with a 2-week history of dry cough, diarrhoea, lethargy, anorexia and fever. He had a past history of cutaneous vasculitis of uncertain aetiology and acne vulgaris. He was not taking any regular medication.

On examination, the patient’s temperature was 37.5°C, but no other abnormalities were evident. Investigations (Box 1) showed that he had pancytopenia, raised erythrocyte sedimentation rate and hypergammaglobulinaemia. The raised rheumatoid factor and anti-dsDNA levels were thought to be most likely related to inflammation.

Treatment was begun with intravenous ceftazidime and gentamicin because of the febrile neutropenia. A bone marrow biopsy performed on Day 2 to investigate the cause of the pancytopenia showed cellular bone marrow with relative erythroid hyperplasia. Multiple blood cultures gave negative results. As the fever persisted, roxithromycin was added to the regimen on Day 4, and vancomycin on Day 8. Serological testing was negative for multiple infections, including HIV infection, but positive for parvovirus B19 IgM, although negative for IgG, on Days 1 and 9.

The provisional diagnosis was parvovirus-related pancytopenia. The patient was discharged without antibiotic therapy 12 days after admission, as he felt well, although he still had a fever.

A month after discharge, the pancytopenia persisted. Repeated parvovirus B19 serological testing was negative for both IgM and IgG. A second bone marrow biopsy at this time revealed occasional macrophages containing amastigotes (the resting intracellular stage of leishmaniae, formerly known as Leishman–Donovan bodies; Box 2). Review of the first bone marrow biopsy specimen failed to show any protozoa.

Further questioning revealed that the patient had visited Greece for a 5-week holiday a year before presentation. A diagnosis was made of visceral leishmaniasis, probably acquired through sandfly bites. The patient was treated with liposomal amphotericin B, 250 mg daily for 4 consecutive days and then weekly for 2 weeks. The diagnosis was confirmed when promastigotes (the motile form of the organism) were successfully cultured. Leishmaniasis is not notifiable in Australia.

The patient’s blood count returned to normal 2 months after starting treatment with amphotericin. He remained well 2 years after ceasing treatment.

This case illustrates an unusual cause of pancytopenia in Australia. It is important to consider leishmaniasis as a differential diagnosis when the patient has a relevant travel history, as in this case. The diagnosis was not made on the first bone marrow biopsy, as smears from bone marrow usually contain few organisms, and have a sensitivity of 80%–85%.1

The differentiation of species causing leishmaniasis is complex and is performed only in reference laboratories. Visceral leishmaniasis is caused by Leishmania donovani, L. infantum or L. chagasi. L. infantum is the common species in the Mediterranean littoral and probably the cause of our patient’s infection.

The incubation period of visceral leishmaniasis is usually 2–8 months. Many infections are subclinical, but the classic presentation is with fever, weight loss, hepatosplenomegaly, pancytopenia and hypergammaglobulinaemia.

The definitive diagnosis depends on demonstrating either amastigotes in tissue or promastigotes in culture. Splenic puncture is the most sensitive means of obtaining a diagnosis, but biopsy of the bone marrow and liver is almost as good. In immunosuppressed individuals, promastigotes can sometimes be cultured from the buffy layer of centrifuged blood, and amastigotes can be seen in macrophages in biopsy specimens from various tissues. Testing for antileishmanial antibodies is not generally available and may be difficult to interpret.

Pentavalent antimony compounds have been used to treat leishmaniasis for decades, but often have severe side effects, and resistance is developing.7 The aminoglycoside aminosidine (also known as paromomycin) is also effective when used either alone or in combination with an antimonial compound.7 Amphotericin can achieve 98% long-term cure in both antimonial-unresponsive and previously untreated patients.7 Lipid formulations of amphotericin are the most active antileishmanial agents.8

Although leishmaniasis is rare in Australia, it needs to be considered as a possible differential diagnosis of pancytopenia, remembering that the disease can present up to several years after return from an affected area. If untreated, visceral leishmaniasis is potentially fatal.

1 Investigations in a patient with visceral leishmaniasis 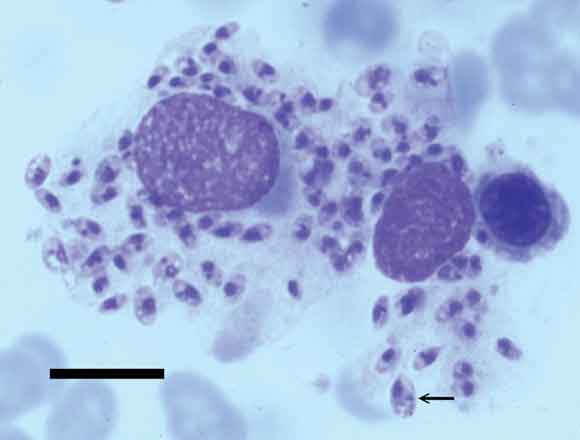 Light micrograph of bone marrow, showing macrophages containing amastigotes characteristic of Leishmania spp. Amastigotes are the non-flagellated intracellular stage of the protozoan, formerly known as Leishman–Donovan bodies. They appear as spherical or oval organisms 2–6 μm in length that contain two darker-staining organelles — a nucleus and a kinetoplast (arrow). The latter is a distinct region of the mitochondria containing mitochondrial DNA. (Giemsa stain; scale bar = 10 μm.) 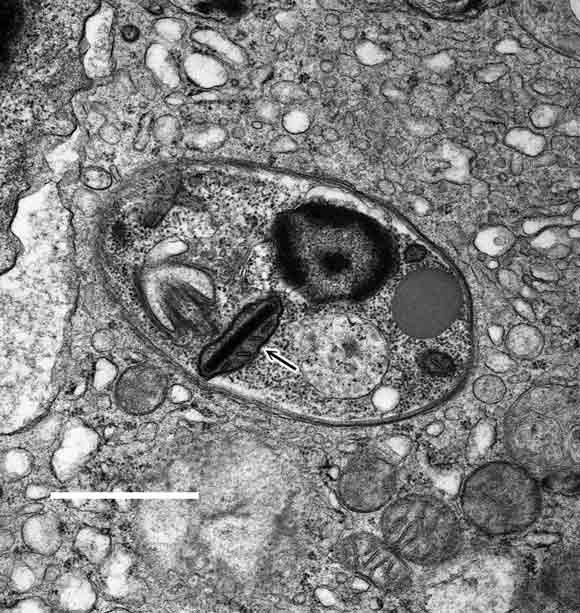