Orbitocranial penetration by a fragment of wood

A 36-year-old man was found semiconscious in a park. He was carrying a syringe which was later found to contain high-purity amphetamine. He became combative, and was sedated and intubated on arrival at a hospital emergency department.

Preliminary examination revealed proptosis of the left eye, which was surrounded by swelling and erythema, and a small conjunctival laceration on the nasal aspect. Pupillary light reflexes were normal. Examination revealed track marks in both cubital fossae suggesting intravenous drug use, but no other abnormalities.

Non-contrast computed tomography (CT) of the brain revealed two minute areas of high density in the left frontal lobe, interpreted as evidence of early infection. CT of the orbits revealed left-sided swelling of the subcutaneous soft tissue, interpreted as preseptal cellulitis. A fracture of the left orbital roof was also noted adjacent to a superior orbital phlegmon (Box 1A).

A lumbar puncture was performed, and, with a provisional diagnosis of preseptal cellulitis and meningitis, the patient was empirically treated with broad-spectrum intravenous antibiotics (vancomycin, ceftriaxone, gentamicin and metronidazole), while remaining intubated in the intensive care unit.

However, as the cerebrospinal fluid appeared normal on microscopy and biochemical examination and showed no growth on culture, the initial diagnosis was questioned. Magnetic resonance imaging of the brain and orbits was performed the day after presentation. This showed a 5 cm tract extending obliquely from the roof of the left orbit into the white matter of the left frontal lobe, associated with a fracture of the orbital plate of the frontal bone (Box 1B). Inflammatory changes, presumed infective, were noted superiorly within the left orbit, resulting in proptosis.

It was concluded that the patient had incurred a penetrating injury of the left orbit entering through the nasal conjunctiva and extending superiorly to the globe, through the orbital plate of the left frontal bone, and into the frontal lobe.

Treatment with vancomycin, ceftriaxone and metronidazole was continued, and the patient was successfully extubated after 5 days. He was then able to recount jumping over a fence and landing on bushes, a branch of which penetrated his orbit. Re-examination revealed a marked decrease in the soft-tissue swelling around the left globe, but significant limitation of movement of the left eye in all directions (Box 2).

These findings, along with the known intracranial penetration and the possibility of retained organic fragments, necessitated surgical exploration. A superior orbitotomy revealed an abscess containing tiny fragments of organic matter. This was washed out. The abscess was sterile on culture. The orbital tract was explored, and further small fragments of organic matter were retrieved. A left frontal craniotomy and repair of the roof of the left orbit were performed concurrently.

Over the ensuing 10 days, the patient’s ocular movements improved to near full range, but he had intermittent temperature spikes. Multiple blood cultures showed no growth. Transthoracic echocardiography revealed a vegetation on the tricuspid valve. Intravenous antibiotics were continued for a further 6 weeks to treat presumed infective endocarditis.

Although the patient developed no further symptoms, magnetic resonance imaging of the brain 11 days after the initial surgery revealed an elongated abscess in the frontal lobe, its inferior end abutting a small fragment of intracranial bone. The left frontal craniotomy was reopened, and the abscess drained. Culture of the abscess again showed no growth, and the patient required no further surgical intervention.

Transorbital intracranial penetration by a wooden foreign body is unusual.1 The resilience of the sclera and ability of the globe to be displaced usually protect the eye from perforation.2

Metallic objects and glass fragments are the foreign bodies most often encountered in the orbit.3 Although computed tomography is excellent for identifying these high-density objects, it is much less sensitive for low-density organic objects.4 Magnetic resonance imaging is more sensitive for delineating the extent of orbital injury and is safe when non-magnetic foreign bodies, such as wood, are suspected.5

Because of its porous organic nature and frequent proximity to soil, wood is an ideal reservoir for bacteria and fungi and is likely to provoke inflammation. A narrow deep tract, such as occurred in our patient, is conducive to the proliferation of anaerobic bacteria.6

The most usual complications of an orbital foreign body are proptosis of the eye, development of a chronic fistula, orbital abscess or cellulitis, and damage to the extraocular muscles or optic nerve.7 Intracranial extension of the foreign body is associated with a 48% incidence of brain abscess and a 25% mortality rate.1,6

This case illustrates the possibility that a seemingly trivial lesion, such as a conjunctival laceration, can be associated with severe lesions in the orbital region. This case demonstrates the need to suspect intracranial penetration in orbital injuries, as intra- and extracranial complications often lead to prolonged hospital admission and carry a significant risk of mortality .

1 Imaging in a patient with an orbital fracture

A. Computed tomography showed a fracture of the roof of the left orbit (F), adjacent to a superior orbital phlegmon (P). 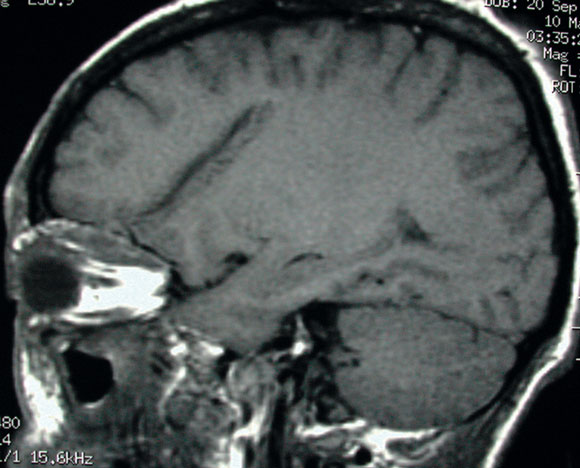 2 Limitation of movement of the left eye

The patient is attempting to look to his right.