A 42-year-old woman developed acute urticaria and angioedema, with throat tightness and cough, after a meal including a bread roll. A more severe anaphylactic reaction, including marked breathlessness requiring oxygen and adrenaline, followed ingestion of the same type of bread roll on another occasion. The only unusual ingredient in this type of bread roll is lupin bran. Skinprick tests with saline extracts of the raw lupin bran and the baked bread roll were strongly positive (Box 1). Tests for allergy to soy and peanut were negative. The patient’s history included seasonal rhinitis with positive skin tests to aeroallergens, but no previous food allergy. She was advised to avoid products containing lupin, as far as possible. She decided not to carry an EpiPen (a self-injectable adrenaline device). A subsequent mild generalised reaction followed ingestion of a specialty bread that was later found to contain lupin bran.

A 42-year-old woman developed acute abdominal discomfort, urticaria, facial oedema, cough and shortness of breath 10–15 minutes after eating a bread roll that contained lupin bran (the same type as Patient 1). She was treated at a hospital emergency department with oxygen, salbutamol, promethazine and hydrocortisone. Skin testing was positive to a saline extract of lupin bran (Box 1). Her history included seasonal rhinitis with pollen allergy on skin testing. She was provided with an EpiPen.

A 26-year-old woman with a Mediterranean family background had often eaten lupini (boiled/dried lupin in the form of a snack food). On one occasion, after eating commercially prepared lupini from a jar, she developed urticaria, angioedema and respiratory difficulty, requiring hospital treatment with adrenaline. She subsequently tried a small portion of home-prepared, boiled and salted lupini, and had a similar but less severe reaction. She reported experiencing urticaria and angioedema after eating a bread roll (she was unable to find out the ingredients of the roll) and after eating imported European ginger biscuits, which were subsequently noted to contain lupin flour as a labelled ingredient. Skin testing was strongly positive to a saline extract of lupin bran (Box 1). Specific IgE to lupin (12.9 kUA/L; reference range, < 0.35 kUA/L) was identified in her blood by the UniCAP test (Pharmacia Diagnostics, Uppsala, Sweden). She was provided with an EpiPen.

Two of the three patients described here were atopic and thus had an increased propensity to develop food allergy, although one of them had no previous food allergies and the third had no previous allergies at all. None was allergic to peanut. None had exercised after eating the implicated foods, and none reacted to normal bread, other wheat sources, or pea.

IgE-mediated food allergy is an important cause of acute anaphylaxis1 and anaphylaxis-related death.2 The major allergenic foods are well known: peanuts and tree nuts (in people of all ages), milk and egg (mainly in children), and crustaceans and fish (mainly in adults). A variety of other foods are less commonly responsible for anaphylaxis.

Peanut-allergic individuals are sometimes allergic to other foods from the legume family, such as soy. Lupin, another legume related to pea, peanut and soy, has been recognised in Europe as a cause of allergic reactions and anaphylaxis.3-5 Lupin flour in food has been reported to produce urticaria and anaphylaxis,3 and may also produce rhinitis and asthma in an occupational setting, through inhalation.6,7

Moneret-Vautrin et al reported that 44% of children allergic to peanut showed positive skinprick responses to lupin, and 7 of 8 who were challenged reacted to lupin flour.8 It seems that lupin allergy may arise by cross-reactivity in people who are already allergic to peanut, or de novo, by primary sensitisation, as in the cases reported here.

Lupinus albus (of the genus Lupinus, which has about 500 members, including ornamentals) is the species most widely cultivated for food (Box 2). Dried lupini, prepared by boiling — a traditional snack in some Mediterranean countries (and, in Australia, among migrants from these areas) — have been reported to cause anaphylaxis.5 Lupin flour and bran are widely used in Europe in bread, pasta, biscuits and other baked products, confectionery, and soya substitutes.

Inclusion of lupin in wheat flour was officially authorised in France in 1997. It has been identified as a target for allergy surveillance in that country.8 It was introduced in the United Kingdom in 1996 and has been recognised as a new or novel food. A form of “postmarketing surveillance”, analogous to that employed by pharmaceutical companies for new drugs, has been suggested.9

Until recently, lupin was not common in Australian foods, but lupin flour and bran are now entering into food manufacturing, where they contribute protein content, fibre, and some textural properties. Currently, lupin is not covered by mandatory labelling regulations such as are in place for peanut, soy and several other allergenic foods.

It is of some concern that, despite relatively restricted use, lupin sensitisation has already become clinically apparent in Australia. According to the current requirements of Food Standards Australia New Zealand (Standard 1.2.4),10 lupin flour, as a separate ingredient or as a component of greater than 5% of a compound ingredient, must be included in the ingredient list on the product label. However, lupin is not part of the mandatory allergy warning system (Standard 1.2.3).10 We believe that it is currently justified to consider it a potentially “hidden” allergen, as bread rolls sold without labels or packaging may contain lupin bran, and indeed at least two and probably three of our patients reacted to an unlabelled food. We suggest that lupin should be considered in cases of unexplained food allergy and should be added to the list of ingredients requiring mandatory allergy warning labelling.

2 Seeds of Lupinus albus, the lupin species most widely cultivated for food 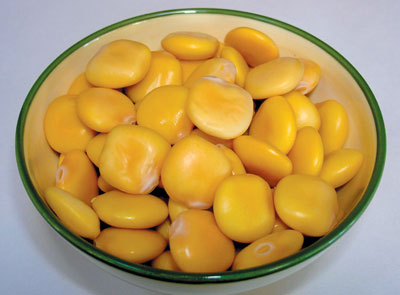