The overwhelming majority of skin cancers are caused by exposure to ultraviolet radiation (UVR) from the sun. However, it is possible that non-solar sources of UVR (such as arc welding) may also cause cancer. The purpose of this review is to explore the evidence that radiation from arc welding may significantly increase the risk of skin or ocular malignancy in welders, those working near them, or occasional users of arc welding processes, such as mechanics, sculptors and farmers.

Over 98% of solar UVR exposure is in the form of UVA. It penetrates the skin more deeply than UVB or UVC, but is less associated with DNA damage.1,2 This may mean that UVA is least likely to produce skin malignancies.

UVB accounts for less than 2% of our solar UVR exposure, as much of it is absorbed in the upper atmosphere. UVB is responsible for most of the DNA damage within skin cells, and arguably most of the resultant skin cancers.1,2

UVC exposure is insignificant for most people, as solar UVC is readily absorbed in the atmosphere before reaching the earth’s surface. Knowledge of the effects of UVC on skin is less clear, but it may be as dangerous to skin as UVB.2,3

Arc welding produces the full spectrum of UVR. The short distance between the arc and the welder’s skin may not be sufficient to absorb most of the UVB and UVC. Arc welders may therefore be at significantly increased risk of developing actinic skin and ocular damage, including malignancy, particularly if they have inadequate protection (Box 1). Furthermore, thermal burns from hot metal can occur when welding and contribute to this risk.4

Review of the evidence

Of the five articles we found that commented on cases of skin cancer possibly attributable to welding, only one was a case–control study of the risk of skin cancer from arc welding. This study, by Emmett et al,5 observed that welders often had skin erythema and small scars from burns, but did not find a link between welding and the development of skin cancer. Several features of the study are noteworthy. The researchers studied only one workplace, which was described as having “well run welding operations which use and enforce current safety standards”. The welders “predominantly welded mild steel”. Their average age was relatively young (43 years), and they had been working for the same employer for an average of 16.9 years (Box 2). As skin cancer often occurs decades after the significant UVR exposure, it is conceivable that the UVR skin damage experienced by workers in the study by Emmett et al had not yet manifested as malignancy. Furthermore, the study did not include examination for naevi. At the time, the relationship between atypical naevi and melanoma was not understood. We now recognise that multiple atypical naevi are associated with a significantly greater risk of developing melanoma.6

The evidence linking welding with ocular melanoma is more established. Case–control studies have shown that arc welders are at increased risk of developing ocular melanoma. Some have postulated that the increased exposure to UVR is the probable (but not definite) cause (Box 3).8-10

Protection from UVR during welding

Factors that increase UVR exposure while welding include working close to the arc; increased arc energy, arc duration or electrical current; welding aluminium (as opposed to other metals, such as stainless steel or iron); and using argon as the shielding gas (rather than helium).11

Suitable means of protection from UVR exposure while arc welding include wearing protective gloves together with clothing that covers the arms and forearms down to the gloves. However, the radiant heat from welding can be quite uncomfortable, and welding on a hot day compounds the problem. Discarding heavy welders’ clothing and gloves in favour of short-sleeved shirts (unbuttoned at the top) exposes the hands, forearms, neck and manubrium to a considerably increased level of UVR (Box 3).

Wearing protective clothing while welding is a hindrance not only for full-time welders. Other tradespeople who perform welding occasionally (eg, motor mechanics) find it inconvenient to put on protective clothing, while sculptors and tradespeople doing highly intricate work also experience difficulty in achieving fine detail when wearing heavy clothing and thick gloves.

Furthermore, while welders are invariably trained in health and safety issues, assistants or other workers in the vicinity may not be aware of the possible risks.

Although there remain many unanswered questions regarding arc welding and skin cancer risk, certain principles should be considered in managing patients with skin cancer:

Large, well designed studies are needed to resolve the uncertainty about the risk of skin cancer from arc welding operations. Issues that should be considered in any future study include:

1 Skin cancer in a welder 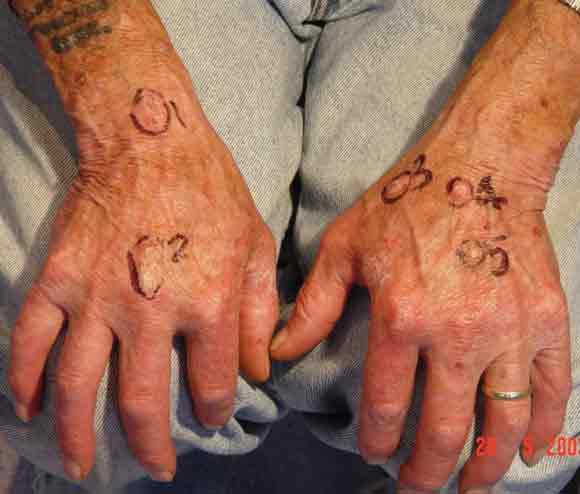 3 Studies linking development of ocular malignancy with exposure to UVR 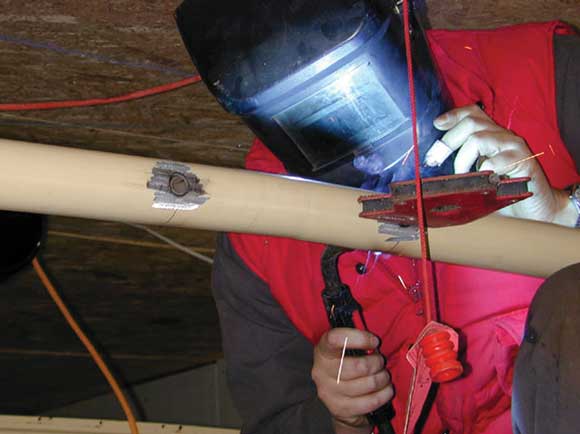 This tradesman is using gas metal arc welding with a relatively high current. His unprotected left hand is very close to the welding arc, risking skin damage from UVR exposure, while his head is closely over the arc, increasing the danger of breathing in gas fumes.The welder had five squamous cell carcinomas on his hands. He had no history of frequent or prolonged sun exposure.