The MJA/Wyeth Award is awarded to the best research article published in the MJA each year, as judged by the Editors and Content Review Committee of the MJA. Prize money of $10,000 is donated by Wyeth Australia as part of its committment to encouraging excellence in clinical research.

The winners of the MJA/Wyeth Award since its inception are:

The 2003 MJA/Wyeth Award went to “Effectiveness of ototopical antibiotics for chronic suppurative otitis media in Aboriginal children: a community-based, multicentre, double-blind randomised controlled trial”, published in the 18 August 2003 issue of The Medical Journal of Australia.

The trial (known as the NACCHO trial) investigators included Dr Sophie Couzos, Mr Traven Lea and Margaret Culbong, from NACCHO; Reinhold Mueller, from James Cook University, Townsville; and Dr Richard Murray, from the Kimberley Aboriginal Medical Services Council, Broome. The award was for their research into the effectiveness of antibiotics in Aboriginal children with otitis media. 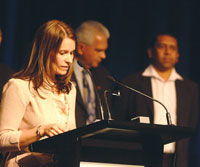 Otitis media is a largely preventable problem, but remains a scourge of Aboriginal children. Among its potential consequences are hearing problems which have social, educational, and employment implications.

The research team looked at exploring the efficacy of ototopical ciprofloxacin compared with traditional topical aminoglycoside antibiotics. They found ciprofloxacin was more effective, and recommend that it be considered as front-line treatment.

Although the immediate dividend of their research is the clinical outcome, what is also important is that their research demonstrates that randomised controlled trials, which are always logistical nightmares, can be conducted in Aboriginal communities if the ownership belongs to these communities, and collaborating partners are Aboriginal organisations such as NACCHO.

In commenting on the research, Dr Michael Lee noted the award-winning MJA article opens with the following words: “Chronic suppurative otitis media (CSOM) is a disease of poverty. It is very common among Australian Aboriginal children, with the prevalence exceeding the World Health Organization’s definition of a ‘massive’ public health problem”.

What set this winning published research apart was its relevance and timeliness to an area of health with an impact on many children across the country.

If improvements in Aboriginal health are to be sustained and are to approach those enjoyed by non-Indigenous Australians, there is a continuing need for research such as this to investigate the most effective ways to treat diseases to which the Aboriginal community are particularly susceptible.